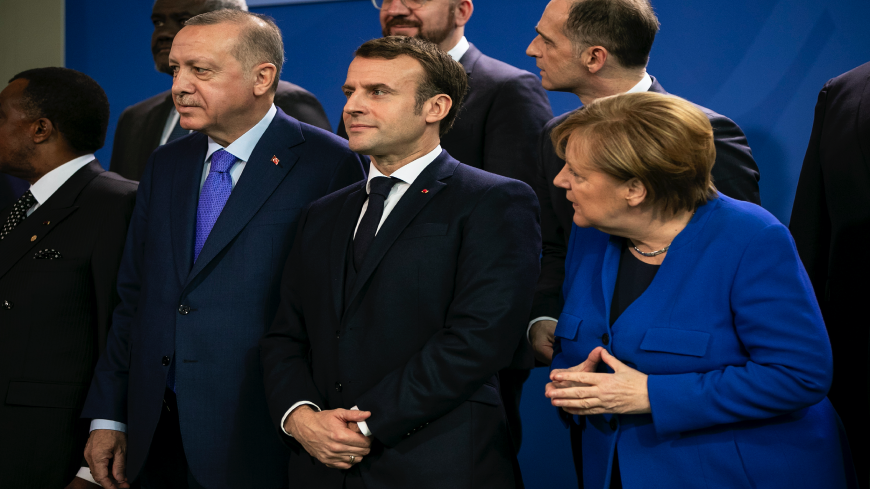 Diplomatic contacts between Turkey and some European countries have accelerated in recent days after President Recep Tayyip Erdogan talked to the German and French leaders, yet the contacts might cause inhouse cracks in the European Union.

Following the flurry of contacts between Ankara and European officials, Nacho Sanchez Amor, the European Parliament’s Turkey rapporteur, sent a letter to President of the European Council Charles Martel, asking two questions: Can the president inform the European Parliament when and how the relations of the EU have been delegated to two specific EU member states? Can the president inform the parliament about the reasons for the absence in this meeting of the current Portuguese presidency of the Council of the EU?

“Quite surprised to see the EU has delegated its relations with Turkey to Germany and France,” Amor tweeted on March 12, sarcastically adding, “I don’t remember when the EU Council agreed to that, so I decided to ask [the] EU Council’s president. As we learned with Brexit, best results come from real unity!”

Seemingly, Amor’s source of information was the pro-government daily Hurriyet Daily News. The newspaper published a color photograph of the meeting between the Turkish and EU officials in Istanbul on March 11. “We will never cut [our ties] with Europe. There were ups and downs in our ties in this period. Europe’s perspective on Turkey has narrowed. There is a Europe [that] receives instructions from Washington,” Kalin was quoted as saying in the report.

The latest meeting came after the March 2 video conference between Erdogan and French President Emmanuel Macron. The call was particularly noteworthy as it came a few months after Erdogan insulted the French leader, saying he was suffering from “a mental disorder.” France, in an implicit protest, had called its ambassador to Ankara back to Paris.

However, the readout published by the Turkish side after the phone call between Erdogan and Macron has a dramatically different tone.

“Pointing out that this year marks the centenary of the Ankara Agreement, President Erdogan underlined that the dialogue between leaders has always played an important role in the Turkey-France relations,” the readout said. “This relationship of friendship, the groundwork of which had been laid by the exchange of letters between Francis I and Suleiman the Magnificent, has successfully overcome many challenges, President Erdogan said, further stressing that the Turkey-France cooperation has great potential.”

“As two powerful allies within NATO, we can provide a significant contribution to efforts for security, stability and peace in a vast geography, extending from Europe to the Caucasus, from the Middle East to Africa,” it added. “We hope that Turkey and France act in solidarity regarding these issues.”

So what has changed between Ankara and Paris since Erdogan diagnosed Macron with a mental disorder? Is Erdogan moving from a position of strength or weakness?

The answer is both. Erdogan defied Macron in Libya and in the Eastern Mediterranean, and he did not lose. Similarly, in the south Caucasus, France stood behind Armenia in the Nagorno-Karabakh clashes whereas Turkey backed the Azeri army, and Erdogan inarguably won yet again.

Courted by German leader Angela Merkel since 2015 — the beginning of the Syrian refugee crisis — Erdogan seems to feel very self-confident today in engaging with Macron.

Yet he also needs to mend Turkey’s relations with the EU, and thus Erdogan needs Macron, as Merkel's backing does not suffice Ankara.

It has been almost two months since President Joe Biden took the office, and he hasn’t called Erdogan yet. The absence of a phone call from Biden — with whom Erdogan had personal ties harking back to the Obama era — is tarnishing Erdogan’s self-proclaimed image as a “global leader.”

Thus, to fill the deepened gap between Ankara and Washington, Erdogan now needs European leaders. Hence, he is maneuvering to win favor with the EU.

Erdogan’s recently unveiled human rights package, judicial and economic reforms, and Ankara’s initiatives to reset ties with Egypt and Israel could all be seen as Turkey’s efforts to mend ties with its traditional allies and the EU.

The European Union, for its part, unlike the United States, appears not indifferent to Erdogan’s overtures. Turkish media has trumpeted that head of the European Commission Ursula von der Leyen and other high-level EU officials are expected to pay a visit to Turkey in the coming days to meet Erdogan.

These meetings could spell a huge diplomatic scoop for Erdogan both internationally and domestically. He could leverage these meetings, particularly to compensate for the absence of Biden’s call. These contacts would also be beneficial for Erdogan ahead of the critical election in 2023, the centenary of the Turkish Republic.

EU leaders and Erdogan will gather on March 25-26 for an EU summit. However, at a time when the state of the rule of law is persistently deteriorating in Turkey, Ankara is violating the European Court of Human Rights' rulings on arbitrary trials, and there are widespread human rights violations — and especially after the closure case against Turkey's third-largest party, the pro-Kurdish Peoples' Democratic Party (HDP), and lifting the parliamentary immunity of the foremost human rights defender Omer Faruk Gergerlioglu — given the weak reactions from European capitals, the upcoming Turkey-EU summit could go into history as yet another EU appeasement to Erdogan.