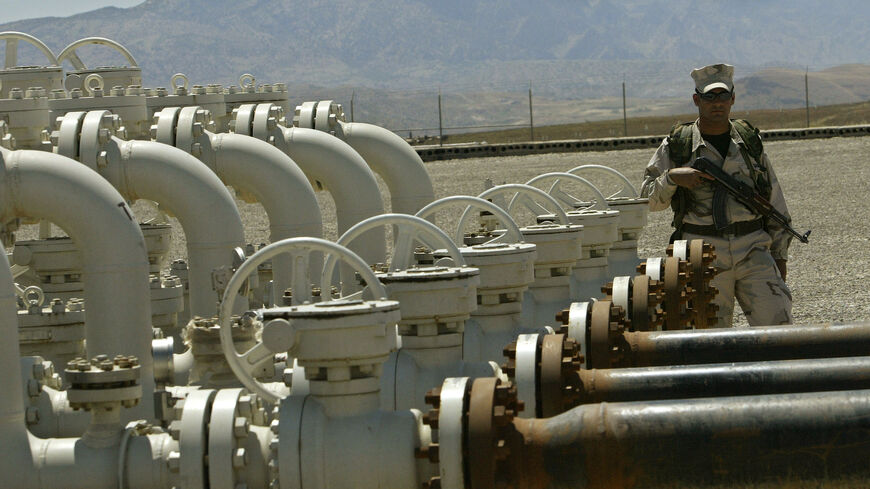 An Iraqi Kurdish soldier stands guard at the Tawke oil field near the town of Zacho on May 31, 2009 in Dohuk province about 250 miles north of Baghdad, Iraq. - Muhannad Fala'ah/Getty Images

Some US oil companies have stopped some activities in the Kurdistan Region of Iraq due to a controversial ruling by the Iraq’s Federal Supreme Court.

The Iraqi Ministry of Oil issued a statement July 4 saying three American companies — Baker Hughes, Schlumberger and Halliburton — “confirmed not to submit to new projects in the Kurdistan Region” in accordance with the court and ministry guidelines, the official Iraqi News Agency reported.

The Federal Supreme Court ruled in February that the autonomous region’s 2007 oil and gas law is unconstitutional. The Kurdistan Regional Government (KRG) conducts energy agreements, such as oil exports to Turkey, independent of Baghdad, per the law. The KRG has repeatedly rejected the court’s decision. The issue has resulted in significant tensions between the KRG and the Iraqi federal government. The latter is now pursuing a new national oil company for the region.

“Baker Hughes has been committed to supporting Iraq’s energy needs for decades, and we are keen to continue doing so in accordance with local laws and regulations,” they said in a statement sent to Al-Monitor.

Halliburton and Schlumberger did not reply to Al-Monitor’s request for comment. Schlumberger said last month that they would not apply for any tenders in the Kurdistan Region without Baghdad’s permission, Reuters reported at the time.

All the companies have established presences in Iraq. Halliburton was formerly chaired by former US Vice President Dick Cheney and reportedly received $39.5 billion in contracts following the US invasion in 2003.