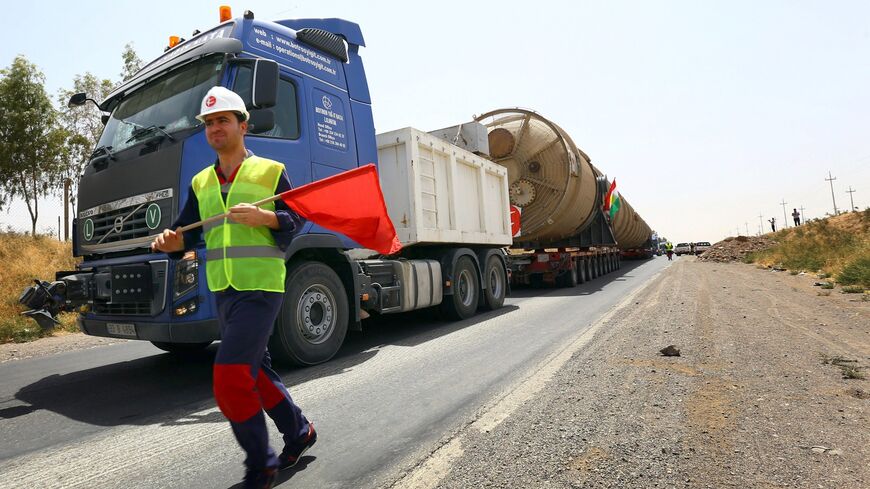 A section of an oil refinery is brought on a truck to the Kawergosk Refinery, east of Erbil, the capital of the autonomous Kurdish Region of northern Iraq, on July 14, 2014. - SAFIN HAMED/AFP via Getty Images

The Kurdistan Regional Government (KRG) in Iraq responded today to the federal government’s threat of legal action over their ongoing oil dispute.

Background: The KRG in northern Iraq has a high degree of autonomy, including its own laws and borders. Entities in the region export oil independently of the federal Iraqi government, including to Turkey. The arrangement has angered Baghdad for years and the federal government has tried to take control of the Kurdistan Region’s oil industry in the past.

Things have been especially tense since February, when Iraq’s federal supreme court ruled the 2007 oil and gas law unconstitutional. The KRG had used that law to develop its own energy sector and has objected to the ruling, citing constitutionality concerns.

What happened: Yesterday, Reuters reported that Iraq’s State Organization for Marketing of Oil (SOMO) had sent a letter dated Aug. 23 to buyers of oil from the Kurdistan Region threatening them with legal action.

Today, the KRG said in a statement that it “strongly condemns the letter.”

“SOMO’s letter is nothing more than another drip in a stream of disinformation published by federally-owned state organization as part of a political fight, a fight which sadly includes an attempt by certain parties in Baghdad to undermine the Federal Constitution of Iraq,” read the statement.

Why it matters: Iraq is a major oil producer, with several oil-rich areas in disputed Kirkuk in the north, Basra in the south and elsewhere. The Kurdistan Region itself is also a major oil producer and raked in more than $1 billion from oil sales during the first quarter of 2022.

Know more: Iraq has tried a few strategies to make the KRG comply with the ruling. In May, the Oil Ministry announced plans to create a new national oil company for the Kurdistan Region.

Iraq has had some success in pressuring international firms to stop oil activities in the Kurdistan Region. Some US companies have stopped operating in the region since February's ruling.

Iraq currently has a caretaker government, as political parties have been unable to form a government since elections last October. The uncertainty could delay any Iraqi-Kurdish dialogue on the oil issue.