A recent scientific study registered the oldest case of an ischemic stroke discovered in an Egyptian mummy. 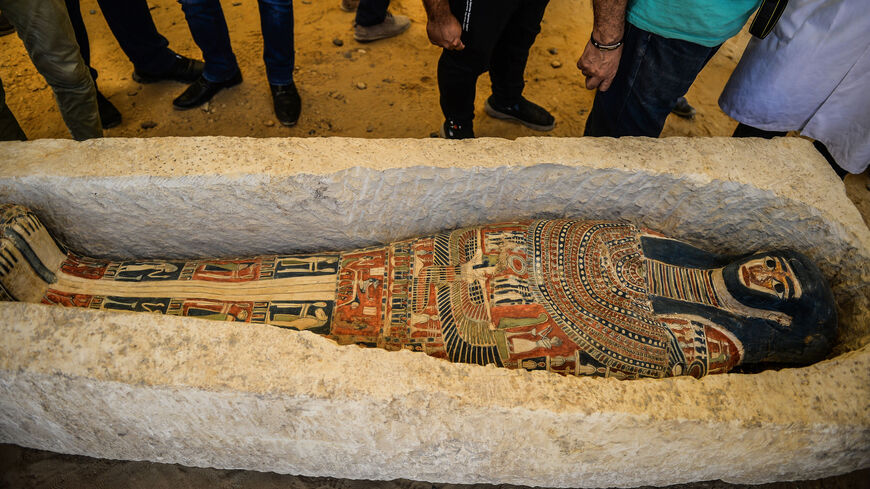 A sarcophagus, part of a new discovery at Dahshur necropolis, is exposed near the Bent Pyramid, about 25 miles south of the Egyptian capital Cairo, during an inaugural ceremony of the pyramid and its satellites, on July 13, 2019. - MOHAMED EL-SHAHED/AFP via Getty Images

CAIRO — A study in the latest issue of the World Neurosurgery journal registered the oldest case of an ischemic stroke discovered in an Egyptian mummy. According to the study, the type of mummification suggests that ancient Egyptians knew procedures to rehabilitate stroke patients.

The joint research team based at the Alcalá University in Spain, New Jersey University, and the American University in Cairo, found that “the mummy was of a woman between 25 and 40 years old. The mummification was done professionally as the mummification and evisceration process were performed with precision.”

The team added, “The woman who lived in ancient Egypt suffered from a stroke. This led her left hemisphere to paralysis, and she lived with that condition for several years.”

The Egyptian mummy belongs to the 25th Dynasty and was discovered by the joint Spanish-Egyptian mission working in the Dra’ Abu el-Naga Necropolis area, west of Luxor in southern Egypt.

In their study, the researchers explained that the mummy was studied microscopically and examined with x-rays. It described the mummy as the oldest case of stroke in the scientific literature. The examination also found that procedures for dealing with this injury involved using a crutch and sticks as stents.

"This is the first reported evidence of an ischemic stroke for a person from ancient Egypt," study co-author Salima Ikram told Al-Monitor, “This study found strong evidence that this woman, the mummy, suffered a stroke while she was young. This made her partially disabled, but the close care of her family and friends helped her survive to a very old age.”

Ikram, the head of the Egyptology department at the American University in Cairo, explained that “the condition of the bone, its location, cortical thickness, and the location of the crutch or wooden sticks found beside the mummy helped determine her condition.”

She added that ancient Egyptian doctors "traveled to other regions of the Mediterranean, sometimes at the request of kings. Later, in the Ptolemaic Dynasty, Egyptian medical knowledge was spread all over the world for people to build on it.”

According to Ikram, this study does not contradict historians’ accounts about Egypt’s decline under the 25th Dynasty leading to the Nubian takeover of the country. She said that “the medical advances had nothing to do with the political ones.”

Egyptology researcher Bassam el-Shamma told Al-Monitor, “The study allows us to reconsider and study the presence of some sticks [wooden planks] inside the tombs of the ancient Egyptians as there may be other cases of people affected by a stroke. In the past, historians attributed the presence of these sticks inside tombs to religious beliefs; however, the latest study indicates that they were there for medical purposes.”

Shamma added, “This study prompts us to reconsider the contents of the tomb of the Egyptian King Tutankhamen, which included many wooden sticks, and therefore he may have had a stroke.”

A report published by the Scientific American journal in 2016 mentioned that 130 walking sticks were found in Tutankhamen's tomb. The researchers also found evidence that he used them during his life.

The report added that DNA evidence showed that the boy king had suffered from malaria. Moreover, a CT scan showed that he might have had a rare disease that affected his bones and right foot.

Shamaa added, “Ancient Egyptians were leaders in diagnosing and treating some diseases. They provided the oldest accurate description of the human brain in history, and this was mentioned in the Edwin Smith Papyrus, which also included a description of head injuries."

Hussein Abdel Bassir, director of the Antiquities Museum of the Bibliotheca Alexandrina, told Al-Monitor, “The ancient Egyptians were very advanced in medical sciences. For example, the tomb of Doctor Qar from the 6th Dynasty had many surgical tools.”

Bassir praised the World Neurosurgery study and said, “By revealing more accurate explanations about the ancient Egyptians and their kings, these studies bring us closer to daily life in ancient Egypt and make Egyptology even more fascinating.”