Many Swedes unsettled by NATO deal with Turkey

The Swedish government has come under fire for its concessions to Turkey in return for Ankara’s support for Sweden’s NATO membership, and the angst among Swedes of Kurdish origin is palpable. 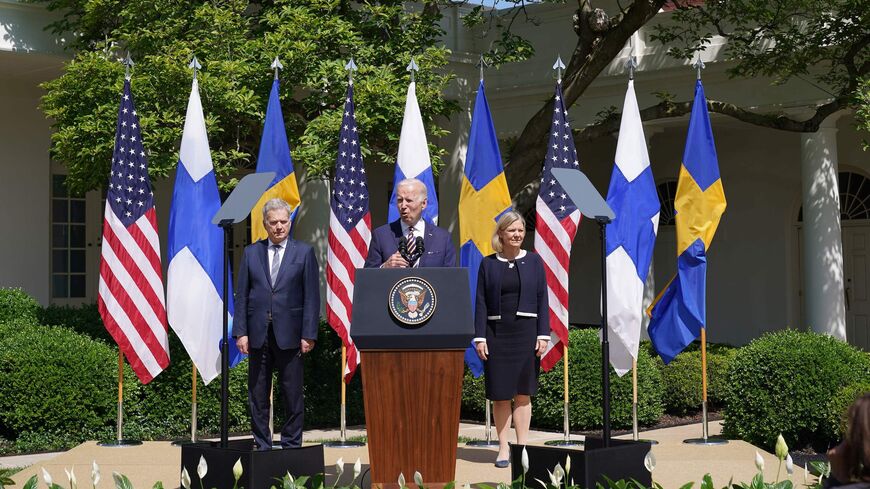 US President Joe Biden, flanked by Sweden's Prime Minister Magdalena Andersson and Finland's President Sauli Niinisto, speaks in the Rose Garden following a meeting at the White House in Washington, DC, on May 19, 2022. - MANDEL NGAN/AFP via Getty Images

American news outlets portray Sweden and Finland’s prospective NATO memberships as a victory for Biden and a setback for Russian leader Vladimir Putin. Yet, their membership might cost the Swedish Social Democrats dearly.

Turkey’s President Recep Tayyip Erdogan’s brinkmanship strategy seems to have paid some dividends, but the understanding reached between Turkey, Sweden and Finland was met by strong criticism among the Sweden public, particularly Swedes of Kurdish origin.

The four-way meeting between the NATO chief and the Turkish, Finnish and Swedish leaders on June 28 paved the way for Finland and Sweden’s NATO memberships after the three countries inked a trilateral memorandum addressing Ankara’s professed security concerns. Many observers, including the author of these lines, were caught by surprise by the breakthrough. It was followed by a long-awaited face-to-face meeting between Erdogan and US President Joe Biden, who reassured his Turkish counterpart that his administration would fully support Ankara’s bid to acquire F-16 fighter jets from the United States. The reassurance was also accompanied by rare praise for Erdogan.

Only hours before the meeting in Madrid, Erdogan reiterated that his country wanted “concrete steps instead of empty words.” He got what he wanted. Some speculation over Ankara’s succumbing to the behind-doors pressure by the Biden administration seems inaccurate, as details on the breakthrough indicate that NATO Secretary-General Jens Stoltenberg and the Biden administration pressured the Swedish side into a compromise.

Under the carefully composed memorandum, Finland and Sweden promised that they would not support the Syrian Kurdish groups that Ankara considers a threat to its national security. The memorandum makes direct references to the People’s Protection Units (YPG) and Democratic Union Party (PYD).

While the memorandum is diplomatically ambiguous, the text addresses almost every point raised by the Turkish side in its objections to Sweden and Finland's NATO bids. The spirit of the document favors the Turkish approach. The disgruntlement and even outrage that the text unleashed on the Swedish political stage also reflects that the deal was more to the taste of Erdogan than the other signatories.

“The agreement with Turkey is a slam for Erdogan, a shame for Sweden and a betrayal of Kurdish freedom fighters. It is a shock for many Social Democrats,” prominent Swedish diplomat and politician Pierre Schori was quoted as saying by Swedish daily Expressen. Schori, who was a close aide of Sweden’s legendary Social Democrat Premier Olof Palme, is still an influential figure in the country’s foreign policy.

Pointing to the security cooperation the deal entails between the Swedish intelligence agency Sapo and the Turkish intelligence service MIT, he claimed, “The same MIT planted a PKK trail” in the investigation over the 1986 murder of Palme, using the acronym for the outlawed Kurdistan Workers Party. “This will be the second time Turkey uses the PKK to gain benefits,” the report quoted him as saying. Ankara equates the PKK, an armed outfit clashing with the Turkish government for some 40 years, with the Syrian Kurdish groups.

The report also quotes Lena Hjelm-Wallen, a former Social Democrat deputy premier, as saying, “I think many feel uncomfortable about having to sit down and negotiate with Turkey about the principles of the Swedish rule of law.”

The Greens and the Left Party, whose outside support remains vital for Social Democrats’ fragile minority government, also seem outraged. “We warned early on of the dangers of putting Swedish security policy in the hands of the despot Erdogan. But the government denied that this would happen,” Left Party leader Nooshi Dadgostar was quoted as saying by Expressen, with another prominent party official Hakan Svenneling accusing the government of making “shameful concessions.”

Former Left Party leader Jonas Sjostedt, who has been quite vocal against any deal with Erdogan, also slammed the deal. “Sweden must therefore deport suspects quickly and accurately with regard to information, evidence and intelligence from Turkey. In Turkey, entirely peaceful Kurdish activists, left-wing politicians and journalists are casually accused of terrorism,” he tweeted in reference to Ankara’s extradition demands from Stockholm.

The parties agreed to “establish necessary bilateral legal frameworks to facilitate extradition and security cooperation” under the memorandum’s eighth article, which is particularly controversial among the Swedish public.

The mounting criticism forced Andersson to try to assuage the worries of Swedes, particularly those of Kurdish descent. “The first is that we never extradite anyone who is a Swedish citizen. The second, we will just follow Swedish and international law. The third is that if you do not engage in terrorist activities, you do not have to worry,” she told Swedish SVT television.

The angst that the memorandum has caused among the Swedes of Kurdish origin is palpable. The Kurds, who have garnered significant sympathy around the Swedish nation over the past decades and are considered a formidable ethnic lobby, now feel like they have been thrown under the bus by the Social Democrats. As traditional supporters of the party, they are now promising to make the party “pay dearly” in the upcoming elections scheduled for Sept. 11.