Desperation is one of the few commodities Lebanon does not lack as the financial burden of securing necessities such as cooking gas grows heavier. 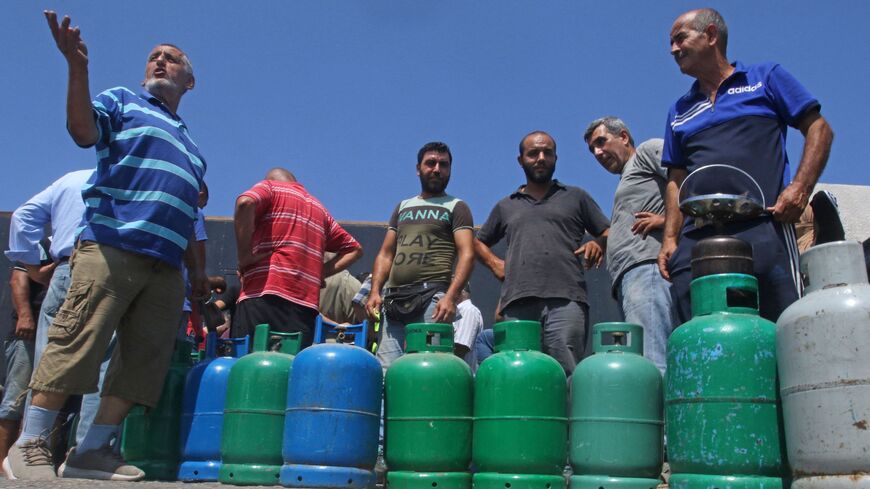 Lebanese wait to fill their gas cylinders in the southern city of Sidon amidst a deepening economic crisis, on Aug.10, 2021. - MAHMOUD ZAYYAT/AFP via Getty Images

As a mother of six children, Um Rami Farahat, who lives in a remote village in Bekaa, told Al-Monitor how she switched from a gas cooker to a wood stove to save money.

“We use it to cook and heat food, to heat water for baths, and even to wash clothes manually,” Farahat said. “It is located in the corner of our land adjacent to our house.” Um Rami prepares the dough for bread in the evening and wakes up at dawn to bake it in the more affordable wood stove.

In most Lebanese regions, wood stoves are making a comeback, taking people back decades and years, and a growing number of people are ditching cooking gas and building outdoor stoves suitable for wood. In addition to villages, the trend is even becoming noticeable in some dense neighborhoods for preparing food and heating shower water.

The cost of commercial wood has also risen, leading people to cut down trees in forests and near their homes. Agriculture experts say that Lebanon’s woodlands are at risk and the situation is spiraling out of control as oak, cedar, lemon, and walnut trees continue to disappear in anticipation of the coming winter.

Resorting to the traditional lifestyle has become most familiar in the impoverished northern Beqaa region. “Gas cylinder sales have declined by 60% in the towns I distribute to, compared to the same period last year”, said Karim El Din, owner of a gas cylinder filling station in the Bekaa region.

The price of one gas cylinder has recently reached 400,000 Lebanese pounds, equivalent to $13 at the black-market rate, more than half of the minimum monthly wage. Gas is subsidized by the government with a set price, but it is being sold at the black-market exchange rate since it is an imported product being paid for by foreign currency.

The country has made significant discoveries of offshore gas estimated at no less than 100 trillion cubic feet of gas and 865 million barrels of oil, yet both have become out of reach for people in the country.

Fadi Abou Shakra, head of fuel distributors in Lebanon, told Al-Monitor, “The price of one gas cylinder has become unbearable, especially since it is tied to the exchange rate of the dollar on the black market. We have gas reserves worth tens of millions of dollars, yet our citizens are having to rely on old-fashioned ways to supply fire.”

Lebanon’s food inflation is now among the highest in the world, with food prices rising by 1,000% and supplies of flour and cooking oil dwindling.

Foreign currency reserves are rapidly depleting, forcing importers to minimize imports and people to hoard them after the Lebanese economic crisis that began in 2019 and has only gotten worse. The crisis has been marked by the depreciation of the Lebanese currency as well as shortages of fuel, food, and medicine.

The economic crisis has pushed more than three-quarters of its population into poverty and reduced the value of the Lebanese pound against the dollar by more than 90%.

Manal Daher, 34, originally from Ansar, had lived in Beirut for nearly her whole life but has now made a permanent move back to the village the south of Lebanon as the rural life had become cheaper.

For Daher, the search for firewood has become an additional work added to the daily chores, as was the case with her grandmothers. Daher's neighbors are also forced to search for firewood in valleys and forests since the price of ready-made firewood has also increased. A small load of firewood is now more than 3 million Lebanese pounds, equivalent to $103 at the black-market rate, compared to no more than 500,000 Lebanese pounds in previous years"

Given the soaring prices of cooking gas, people in the business anticipate further loss. “I used to deliver cooking gas cylinders to 30-40 homes each day," Maher Abu Mjahed, told Al-Monitor. "I now deliver to 10-15 homes maximum."

Metal and iron crafters in the country have also witnessed an increasing demand for iron stoves and innovations to meet the increasing demand. A supplier of iron stoves in Rachaya, Amin Mhana, told Al-Monitor that he makes all sizes of stoves, but "its importance lies in the fact that it only needs little thin firewoods." The increased demand has also raised the price of iron, he said.

While wood stoves may be cheaper and energy-efficient, health experts warn of the danger of this cooking method. Maha Karam, a radiologist in Mount Lebanon hospital, told Al-Monitor that wood smoke "damages the respiratory system and leads to the inability of the body to complete the air exchange process” because of a higher concentration of pollutants and toxic substances in the lungs.

Karam also said that many patients report the smoke was also affecting their eyes.