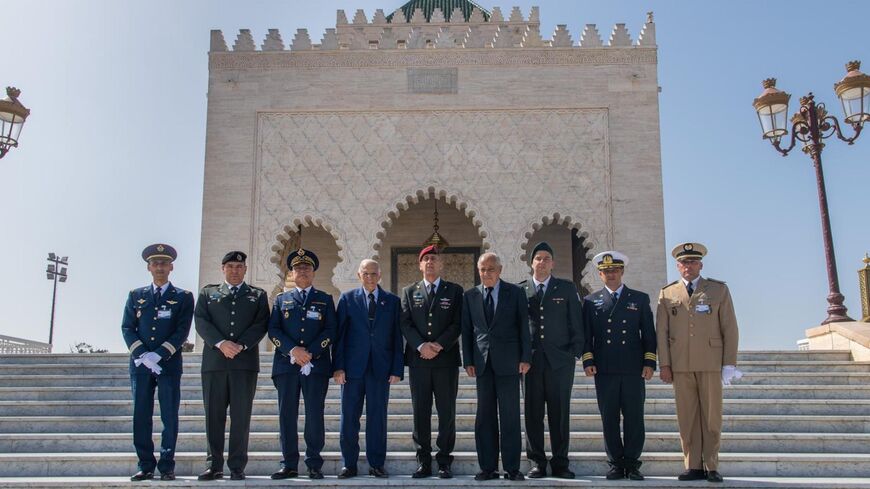 Lt. Gen. Aviv Kochavi is on a visit to Morocco this week, marking the first ever public visit by Israel’s top soldier in uniform to the Arab state. Kochavi’s three-day visit is being hosted by Moroccan Defense Minister Abdellatif Loudiyi and army commander Lt. Gen. Belkbhir El-Farouk. Kochavi is accompanied by the head of the military’s Intelligence Research Division Brig. Gen. Amit Saar, perhaps indicating the more clandestine nature of his talks and their true goal: deepening military and intelligence cooperation between the two countries.

Morocco has little if anything to contribute to Israel’s national security, but Israel, and especially its vaunted signals intelligence and cyber unit 8200, could prove helpful in Morocco’s ongoing conflict with Algeria and the Polisario rebels over the Western Sahara, according to Western assessments.

Morocco’s 2020 decision to normalize relations with Israel and bring them out into the open owes much to President Donald Trump’s promise to recognize Rabat’s control over the disputed Sahara area in return. Kochavi’s visit could also suggest that the Biden administration does not intend to reverse Trump’s controversial decision on the matter, a move that could have undermined and even torpedoed the Israel-Morocco rapprochement. The sides are growing closer.

Two days before leaving for Morocco on July 18, Kochavi hosted a visit by Gen. Michael Kurilla, head of the United States Central Command (CENTCOM), his second to the country since Trump moved Israel in 2021 from the purview of EUROCOM to that of the central command that includes the Persian Gulf and parts of Asia.

This strategic move reflected the dramatic thawing of relations between Israel and many countries in the Middle East. Kurilla’s first visit to Israel in May of this year, which followed stops in Saudi Arabia and Egypt, was devoted to getting to know Israel’s top military commanders.

Morocco, at least at this stage, is not joining the regional aerial defense alliance being promoted by the United States to confront the Iranian threat, but it maintains close security relations with Israel that peaked with the signing of a defense pact during the November 2021 visit to Morocco by Defense Minister Benny Gantz.

Kochavi leaves office at the end of the year. His successor’s appointment has prompted a political clash that landed in the lap of Attorney General Gali Baharav-Miara, after opposition leader Benjamin Netanyahu sought to delay the move questioning its legality during an election campaign.

Netanyahu hopes that a return to the premiership would allow him to determine the identity of Israel’s army chief for the next four years, considered particularly dramatic given Iran’s nuclear program progress. Reportedly, Gantz has refused to back down and is considering two candidates for the post: incumbent deputy army chief Maj. Gen. Herzl Halevi and his predecessor, Maj. Gen. Eyal Zamir.

Gantz’s argument in winning over the attorney general’s approval for the move despite the elections was the urgency of the Iranian threat. The military is in a race to consolidate a massive operational plan to confront the Iran threat (both conventional and nuclear) in case negotiations between Iran and world powers collapse or Iran decides on a nuclear breakout. Gantz argues that the army needs a commander to make the required appointments and take part in formulating the plan as soon as possible. He rejected the idea of extending Kochavi’s four-year term by six months, and perhaps by an additional six months in case of an inconclusive election outcome at such a dramatic time.

Sources say Gantz’s preferred choice is Halevi, 55, who grew up in a hawkish right-wing family and served as commander the Sayeret Matkal commando unit, commander of the Galilee Division, chief of military intelligence and head of the Southern Command. Halevi is highly intelligent and does not shirk confrontation.

His rival in the race, Maj. Gen. Eyal Zamir, recently issued a fascinating document he wrote during his stint as a fellow at the Washington Institute, reviewing Iran’s activity in the Middle East and that of its proxies, offering ideas and strategies to deal with Iran in the coming decisive period.

Halevi’s prospects are better, but even if Zamir is not picked for the job, the document titled “Countering Iran’s Regional Strategy: A Long-Term, Comprehensive Approach” provides a rare professional look at the thinking among the top echelons of the Israel Defense Forces regarding the challenges from Iran.

Zamir’s views on the subject are not substantially different from Halevi’s. Zamir recommends stepping up the assassinations and attacks on top Revolutionary Guard figures, reveals that Iran has been successful in building a military infrastructure deep in Syria, deploying missiles and “suicide” drones and obtaining the ability to strike Israel from this front-line position.

According to Zamir, Israel must keep up its intensive blows against the Revolutionary Guards and exact a heavy price for their activity. It should also seek to foil Iran’s entrenchment in the region and its adaptation of Hezbollah’s rockets into precision missiles at virtually any cost.

Zamir believes Israel should cooperate with other forces and members of the anti-Iran coalition and also attack terrorists among Iran’s proxies and envoys in various arenas in the region. According to Zamir, Israel has greatly disrupted the weapons-smuggling operations from Iran to Damascus (according to foreign reports, the Israel Air Force bombed the Damascus international airport recently and took parts of it out of action).

But Zamir also notes that the maritime route is still active and oil tankers and weapons shipments continue to reach Syria from Iran. On July 5, Gantz unveiled four Israeli satellite photos said to show Iranian warships in the heart of the Red Sea, from where they threaten trade routes.

Zamir also offers an interesting idea of trying to come between Iran and its regional proxies and pressuring them to sever ties with Tehran. Zamir argues that Israel could offer these proxies deals that are more profitable than their terrorist activities. He recommends “waging an ideological-cultural campaign to win the hearts and minds of the region’s sects, tribes and population groups in a way that highlights the advantages, especially for Shia communities, of moderate Islam and the values of democracy, as opposed to authoritarianism and dictatorship.”

Even if Zamir is not picked as the next ID chief, his concepts are shared by most of the top military brass and reflect what we can expect in the coming years.