Iran’s foreign minister says that economic guarantees from the nuclear deal are nothing new. 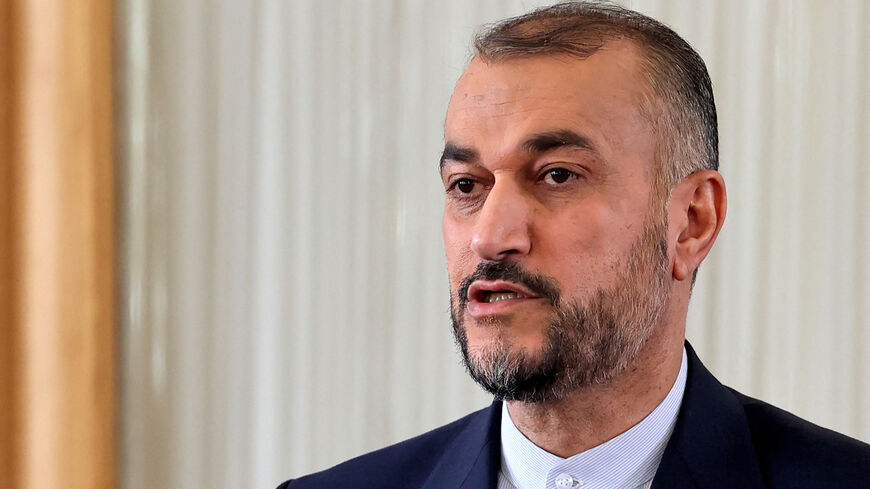 Iran's Foreign Minister Hossein Amir-Abdollahian speaks during a joint press conference with his Qatari counterpart at the Foreign Ministry headquarters in the capital Tehran on July 7, 2022. - ATTA KENARE/AFP via Getty Images

Qatar’s foreign minister arrived in Tehran today in an attempt to salvage the Iranian nuclear deal.

Muhammad bin Abdulrahman Al-Thani was greeted by Iranian Foreign Minister Hossein Amir-Abdollahian in Tehran. Qatar has been facilitating indirect talks between Iranian and US officials in Doha. Though those talks have not resulted in a breakthrough, they did bring representatives of the two countries to the same city for the first time since the Vienna talks collapsed in March.

Amir-Abdollahian told reporters, “Contrary to claims by US media, we do not have any demands beyond the JCPOA and our demands are within the framework of the 2015 deal.” He was using the acronym for the Joint Comprehensive Plan of Action, the deal signed in 2015 under President Barack Obama in which Iran agreed to reduce its nuclear program and expand inspections at its nuclear sites in exchange for sanctions relief. In 2018, President Donald Trump exited the deal and reapplied sanctions.

Some of the hang-ups in reviving the deal, which President Joe Biden is seeking to do, are sanctions on the Islamic Revolutionary Guard Corps and guarantees that the United States will not exit the deal again. Dropping the IRGC from the US list of foreign terrorist organizations would be politically costly for Biden and the Democrats and given the nature of the JCPOA — it is not a treaty ratified by Congress — it's difficult for Washington to make guarantees against a future exit. The next US president could easily reapply sanctions on Iran.

On the issue of “economic guarantees,” Amir-Abdollahian said, “This is not an extra demand.” He added, “The US has to be committed that Iran will benefit completely from the 2015 agreement.” He continued, “Up until now, the US has not been able to convince Iran that it remains committed.”

Iranians are also watching US public opinion polls. Given Biden’s low approval ratings and a midterm election in which Democrats are projected to lose the House, Iran is very concerned that a Republican Congress or president in 2024 will withdraw from the deal or reapply sanctions.

Amir-Abdollahian certainly seems to be expressing the position not just of the administration but of all they key decision-makers in the Islamic Republic. Supreme Leader Ayatollah Ali Khamenei has the final say on all foreign policy decisions. While previously there was more room for dissent on debating the merits of a deal with the United States, there seems to be more conformity within the Iranian establishment. Members of the Hassan Rouhani administration, which worked on the original 2015 deal, have all been sidelined and have abstained from expressing opinions about the ongoing negotiations.