Israeli tourists are flocking to south Sinai while Egyptians are being forced to turn back, in violation of the law and the constitution. 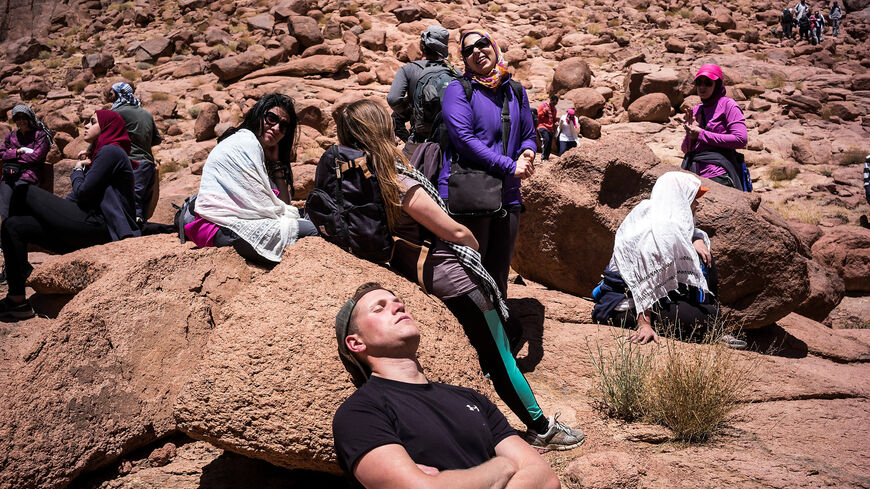 CAIRO — The Israeli Ministry of Transport announced in June an agreement with the Egyptian authorities to open the Taba land crossing between Egypt and Israel, starting July 3, for an indefinite period. The measure aims to allow a large number of Israeli tourists to enter resorts in the southern Sinai Peninsula, representing one of their preferred destinations, according to the ministry.

The Israeli move comes at a time when Egyptian authorities are imposing more restrictions on the entry of Egyptian citizens to the resorts of south Sinai. Al-Monitor met with several Egyptians who planned their vacation in south Sinai, but were eventually forced to return to the cities from which they came.

Al-Monitor contacted an official at the media office of the Ministry of Interior to get a comment on the matter and the reasons why some Egyptians are banned from entering south Sinai. The official denied this, saying, “There is no ban against the movement of Egyptians inside Egypt.”

According to the Israel Airports Authority, which oversees the Taba border crossing between Egypt and Israel, more than 1.5 million Israeli tourists entered south Sinai in 2019. This number dropped to 335,000 in 2021 after the reopening of the crossings that were closed due to the coronavirus pandemic in 2020. Recent figures, however, show a rebound with 334,000 Israeli tourists having arrived in south Sinai since the beginning of June.

Israelis do not need a visa to enter Egypt if they come through the Taba crossing. They only have to pay the entry fees, provided they do not leave Sinai. They do need a visa to visit Cairo or any other Egyptian city.

On July 3, prominent Egyptian political activist Abdel Rahman Tarek, known in local media as “Mocca,” said on Facebook that security authorities on the south Sinai road denied him access to the coastal city of Dahab, forcing him to return to Cairo, after subjecting him to a security check.

Tarek was released by the security forces from Tora prison in Cairo less than a month ago, after nearly 2½ years in pre-trial detention. He was arrested in September 2019 on charges of spreading false news and joining a terrorist group. In June, the State Security Prosecution issued a decision for his release.

She told Al-Monitor, “In October 2021, I was heading to south Sinai in a private vehicle with 12 of my university colleagues. We were a group of male and female friends. A security official stopped us on the way and forced the driver to turn back to Cairo.”

Nour el-Din said, “We asked for the reason, but the only response we got was that these were ‘the instructions.’ When we insisted on crossing, especially since we had reservations at hotels and booked tours with a tourist company, the officers started acting aggressively. We did not want to get into trouble so we headed back.”

She added, “This only happened on our trip to south Sinai. We easily made it to other tourist resorts outside Sinai. I am not sure if these security restrictions are only imposed in south Sinai. The same group later went to the city of El Gouna [on the Red Sea coast]; we had no problems and arrived there easily.”

Egyptian singer Ahmed Nabil went through the same experience. He told Al-Monitor that in December 2021, while on his way with a friend to a south Sinai hotel to perform a concert, he was unable to get through. Security forces claimed they had no permit to enter south Sinai.

Legally, there is no entry permit required to go to south Sinai. According to Article 62 of the constitution, “Freedom of movement, residence and emigration is guaranteed. No citizen may be expelled from state territory or banned from returning thereto. No citizen may be banned from leaving state territory placed under house arrest or banned from residing in a certain area except by a causal judicial order for a specified period of time, and in cases specified by the law.”

An employee of a passenger transport company spoke to Al-Monitor on condition of anonymity about several incidents he experienced while driving Egyptian tourists to south Sinai and Sharm el-Sheikh.

“Many passengers were forced to return to Cairo and denied entry, without any justification,” he said. “Security forces would stop us and an officer would ask passengers for their national identity cards. He would then pick those who can go through and those who must go back.”

He noted, “Every driver working for a tourism or transportation company must have experienced this several times. Sometimes the passengers singled out by the security officers would be subject to a security check, and in other cases some would be immediately banned from crossing toward south Sinai.”

The source was unable to give specific numbers, but he confirmed that these incidents happen frequently.

In regard to the legality of preventing Egyptian nationals from entering south Sinai, Mahmoud Nasser, a retired brigadier general and expert in security affairs, told Al-Monitor, “It is not legal to prevent any national from entering any of the country’s governorates."

He said, "However, this matter is left to the discretion of the responsible security officer, who may suspect a specific person may cause problems. After running a background check, some passengers appear to have a criminal record and in this case a decision may be taken not to allow them to pass through for fear they would cause security problems.”