Two music festivals organized by Israel in the Sinai Peninsula have raised the ire of Egyptians as they coincided with the anniversary of the liberation of Sinai. 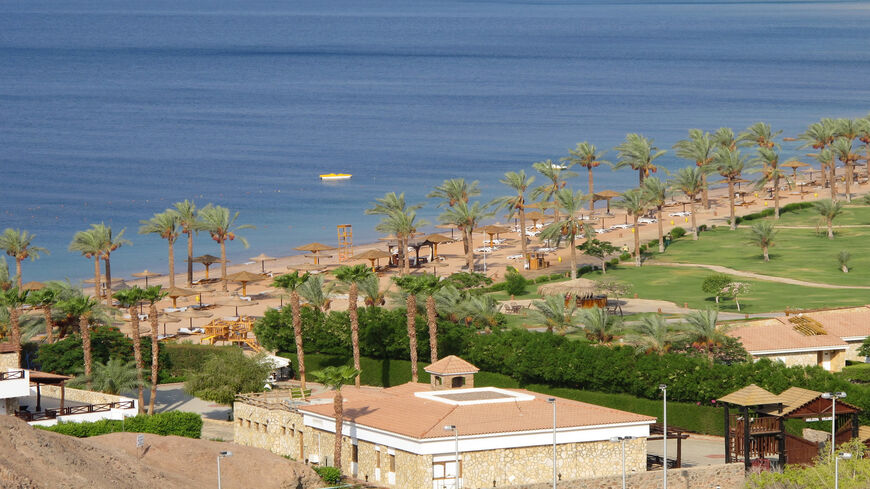 The Hilton Taba Resort is seen on the east coast of the Sinai Peninsula, Egypt, July 10, 2013. - Clemens Wortmann/AFP via Getty Images

The We Grounded and Nabia music festivals, which recently kicked off in the Sinai Peninsula in northern Egypt, provoked an uproar across the country as they were organized by Israelis and coincided with Egypt’s anniversary of the Sinai liberation.

The two festivals in Sinai were organized in mid-April, 350 kilometers (217 miles) from Tel Aviv, on the occasion of the Jewish Passover holiday. But the timing coincided with Egypt’s commemoration of the liberation of Sinai, which was occupied by Israel from 1967 until April 25, 1982.

The We Grounded festival, whose website refers attendants to the Hilton Nuweiba Club Resort and Time Coral, runs from April 20 to April 23.

The festivals are taking place after more than 150 Palestinian worshippers were injured April 15 during clashes with Israeli security forces at Al-Aqsa Mosque compound/Temple Mount in Jerusalem.

A few days before the start of the festivals, various Egyptian movements called for the boycott of the hotels hosting the music festival, for the withdrawal of investments and the imposition of sanctions.

The Egyptian branch of the boycott, divestment and sanctions (BDS) movement said in an April 13 Facebook post, “Every year we take pride in the heroes of the 1973 war. … But as we prepare a festive post like every year, we realize [now] that the Zionist occupation has returned to Sinai again.”

In another post April 18, the movement said the Tulip Hotel responded to calls to prevent the hosting of the festival, which was instead hosted by the Hilton Nuweiba Coral Resort.

The movement noted in another post the same day that the Hilton resort “opened the hotel's doors to the Zionists and hosted them to dance in Sinai on the anniversary of its liberation,” despite the hotel management’s knowledge of the campaign launched against the festival.

BDS Egypt further called for escalating the boycott campaign against the Israeli festival and the Nuweiba Coral Resort, adding that Israel insists on holding parties in Sinai under the protection of Israeli security companies in Egyptian hotels and resorts.

On April 1, the organizers of the festival had announced that the event was moved to a different location, some 45 minutes from the Tulip hotel, which was initially equipped for the festival, adding that people who already bought tickets for the festival would still be able to benefit from the hotel’s services.

The organizers added, “The new location is totally approved by all of those authorities and they are more than happy to let us have the festival over there.”

The festival was eventually moved to a location close to the Egyptian-Israeli border, namely to the Sinai Beach Club of the Nuweiba Coral Resort.

On April 19, BDS Egypt condemned the Israeli festival held on Egyptian soil saying in a tweet, “On the 10th of Ramadan, and close to the anniversary of the liberation of Taba, the cities of southern Sinai witness tens of thousands of [Israeli] settlers coming to Sinai to celebrate Passover with lies regarding their association with Sinai and their inevitable return to it.”

Ahmed el-Sayed, researcher at the Center for Israel Studies, told Al-Monitor that the Israeli celebration aims to commemorate the exodus of the Israelites from Egypt according to the biblical narrative. Passover is one of the main holidays in Judaism, and it is celebrated for seven days according to the Jewish calendar. This year’s celebrations began April 15, he said.

Sayed noted that the We Grounded festival had previous editions that were held in 2019 in Eilat, facing the Egyptian border with Taba.

Speaking to Al-Monitor over the phone, Said Sadiq, political analyst and professor of political science at the American University in Cairo, described the current situation between Egypt and Israel as “cold peace given the current increase in security coordination and the return of direct flights between the two countries. Also, the diplomatic and economic relations have significantly improved recently. This is added to the reopening of the Israeli Embassy and the resumption of the ambassador’s mission in Cairo as the Israeli side continues to praise the strong ties between the two countries.”

However, he added, “There is no popular, parliamentary, media and artistic normalization between the two countries due to the presence of strong resistance at the popular level.”

On April 17, Israel's El Al carrier operated the first direct flight from Tel Aviv to Sharm el-Sheikh, coinciding with a flock of Israeli tourists heading to Egypt to celebrate Passover on the land of Sinai.

The Israeli Embassy in Cairo said in a tweet, “In a touching and historic event, the first direct flight took off this Sunday morning [April 17] from Tel Aviv to Sharm el-Sheikh.”

It continued, “A large congestion was observed at the Taba crossing, where thousands of Israeli tourists head this week to Sharm el-Sheikh and Taba, while about 5,000 tourists are expected to go through the crossing today.”

Israeli Prime Minister Naftali Bennett had announced in mid-March an agreement with Cairo to launch a new route for flights between the two countries, describing the move as “another important step in warming up the peace agreement between Israel and Egypt.”

Bennett has paid two visits to Sharm el-Sheikh within months, once in September 2021 and more recently on March 22, when he met with Egyptian President Abdel Fattah al-Sisi.

In October 2021, the first EgyptAir flight landed at Ben Gurion Airport in Tel Aviv, in a move described by both parties as “historic.” For decades before that, Air Sinai, the smaller Egyptian airline that does not bear the Egyptian flag, had operated flights between the Ben Gurion and Cairo airports.

Egypt was the first Arab country to have signed a peace agreement with Israel in 1979. A few years later, direct flights between the two countries via Air Sinai began.