To attract tourists, Egypt’s Supreme Council of Antiquities has launched a project to restore and develop the Tombs of the Nobles and Qubbet el-Hawa in Aswan, south of the country. 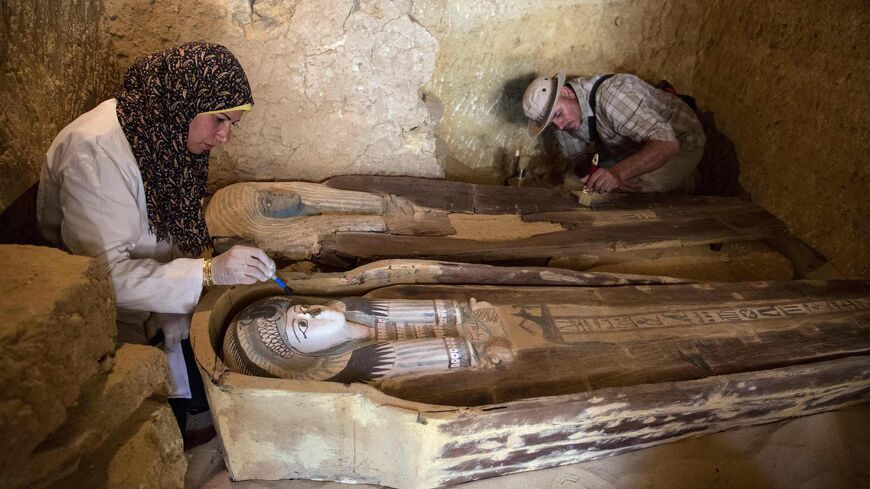 Excavation workers work inside a burial shaft at the Giza pyramid plateau, on the southwestern outskirts of Cairo, on May 4, 2019, following the discovery of several Old Kingdom tombs and burial shafts. - MAHMOUD KHALED/AFP via Getty Images

CAIRO — The Egyptian Supreme Council of Antiquities announced the start of the restoration of the Qubbet el-Hawa (Dome of the Wind) site and the Tombs of the Nobles in Aswan in southern Egypt. The site will eventually open to the public after the restoration is complete.

The Egyptian Ministry of Tourism and Antiquities has not set an official opening date so far.

Secretary-General of the Supreme Council of Antiquities Mostafa Waziri said on July 13 in a press statement, “This step is part of the Ministry of Tourism and Antiquities’ plan to restore and develop archaeological sites across the country, especially in Upper Egypt. This effort aims to make more archaeological sites open to visitors.”

Waziri said the areas of the Tombs of the Nobles and Qubbet el-Hawa were selected for this project because of their immense historical and archaeological importance. “The inscriptions on these tombs are very precise and beautiful,” he said.

According to the official website of the Egyptian Ministry of Tourism and Antiquities, the Tombs of the Nobles is home to several tombs of rulers of the Old Kingdom such as Harkhuf, Sabni and Mekhu, and others from the Middle Kingdom such as Senusret I and Senusret II.

The website wrote that the inscriptions on the walls of the tombs highlight the importance of the roles played by prominent notables during this period of time, including launching exploratory and commercial voyages as well as military campaigns.

The inscriptions adorning the walls of the tomb of Mekhu and his son Sabni that dates back to the Sixth Dynasty show that Mekhu was leading a royal expedition to the south and, upon his return, he was attacked and killed by a Nubian tribe. The inscriptions also show that his son Sabni waged a counterattack to avenge his father and recover his body, according to the website.

Speaking to Al-Monitor, Abdel Moneim Saeed, director-general of Aswan and Nuba Antiquities Sector, revealed some details of the project. “Work is currently underway to prepare and equip three tombs in the Tombs of the Nobles area to be opened soon for visitors. These include the tomb of Kakm, who was the high priest of the New Kingdom; the tomb of Sobekhotep, the seal-bearer of the King of Lower Egypt from the Fifth Dynasty; and Setka, the chanting priest from the First Intermediate Period.”

Saeed explained that the current works include the careful restoration of the three tombs and paving and repairing the roads leading to them to pave a specific path for the visitors. “This is in addition to developing the lighting system with modern engineering systems and adding identification and guiding signs to those tombs and the area of ​​the Tombs of the Nobles in general.”

In turn, the head of the Central Administration of Antiquities in Upper Egypt at the Ministry of Tourism and Antiquities, Mohamed Abdel Badie, commented in a press statement July 13 on the restoration works at Qubbet el-Hawa necropolis. He said that the works include the restoration of two tombs dating back to the New Kingdom era in the northern part of the area, namely the tomb of User Wadjat, the ruler of the island Elephantine in Aswan; and Amenhotep, the high priest of the Elephantine Trinity of gods and the bearer of the seals of Upper Egypt.

Badie said these two tombs are among the nine tombs that were discovered and annexed to the Supreme Council of Antiquities in 2015.

He also said that the idea of restoring these tombs dates back to 2019 before the coronavirus pandemic. “We wanted tourists and visitors to be able to see these tombs because they have very bright [pharaonic] inscriptions and colors, almost similar to those found on the tomb of Nefertari.”

Badie clarified that the restoration works of these two tombs at Qubbet el-Hawa are under the supervision of an Egyptian-German joint mission, co-headed by the director of the Egyptian Museum in Berlin, Frederica Seyfried, from the German side, and Saeed from the Egyptian side.

“The restoration work of these archaeological tombs aims to attract foreign tourists, by showcasing new tombs and archaeological discoveries to tempt tourists to return again to Aswan,” Saeed said. “This archaeological area (the Tombs of the Nobles and Qubbet el-Hawa) will be surprisingly popular among tourists due to its immensely beautiful and brightful inscriptions.”

Abdel Rahim Rihan, antiquities expert and member of the History and Antiquities Committee of the Supreme Council of Culture, shares the same opinion. He told Al-Monitor, “The project will revitalize local and international tourism in Aswan, which boasts multiple tourism attractions unparalleled in the world, be it its Nile area or its unique archaeological sites.”

He continued, “Qubbet el-Hawa is a rocky mountain located on the western bank of the Nile in Aswan. It is an ancient acropolis and is home to the tombs of ancient nobles and priests of Aswan. The Tombs of the Nobles site is located on this mountain and includes about 100 tombs where about 1,000 people were buried, most of them from the Old Kingdom and the Middle Kingdom.”

Rihan indicated that the governorate of Aswan has a number of unique monuments, including the Temple of Kalabsha, which is one of the most important Egyptian Nubian temples and was built in the early Roman era. “This is in addition to the Nubian Museum and the Elephantine Island Museum, and the magnificent views from the Nile banks that keep luring tourists,” he concluded.