LIV Golf, which is backed by Crown Prince Salman’s Public Investment Fund, is gaining serious momentum in the golf world. But victims of September 11 oppose the league due to the Saudi government’s alleged role in the attacks. 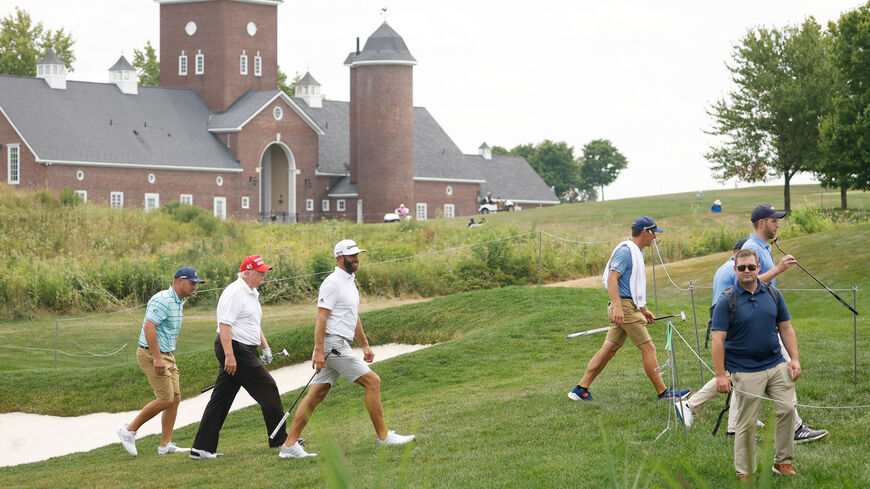 Former US President Donald Trump talks to Bryson DeChambeau of Crushers GC and Dustin Johnson of 4 Aces GC walk from the 14th green to the 15th tee during the pro-am prior to the LIV Golf Invitational at the Trump National Golf Club, Bedminster, New Jersey, July 28, 2022. - Cliff Hawkins/Getty Images

But victims of the Sept. 11 attacks and their families are protesting the league’s event due to the Saudi government’s alleged connection to the tragedy. Tim Frolich, who survived the attack in 2001, said that golfers should consider this before taking LIV Golf’s huge payouts.

LIV Golf burst onto the golf scene earlier this year, peeling away big names such as Phil Mickelson, Dustin Johnson and Sergio Garcia from the PGA Tour, which is the dominant competition in the United States. LIV Golf has reportedly offered top golfers hundreds of millions of dollars to join. The league also pays considerably higher guaranteed money than the PGA Tour, making it especially attractive to lesser-known golfers who have not made millions playing the sport.

LIV Golf is financially backed by the Public Investment Fund, which is led by Saudi Crown Prince Mohamed bin Salman and serves as the kingdom’s sovereign wealth fund. The league has been controversial from the beginning due to Saudi Arabia’s human rights record, as well as the 9/11 issue.

The Saudi government’s connection to the attacks is controversial and disputed. The Biden administration decided last year to start releasing 9/11 evidence. Among the most pressing piece to come out recently is a video released by a British court that shows a party two of the hijackers attended in the US state of California in 2000. The host of the party, Omar al-Bayoumi, was later determined by the FBI to have received a stipend from Saudi intelligence. The report did not definitively conclude whether Bayoumi had foreknowledge of 9/11, the US news outlet CBS reported in April.

The Saudi government has long denied a connection to the Sept. 11 attacks, and there is no definitive evidence the country’s leadership was involved. The government has not commented on the latest protests.

Some survivors of the attack and family members of those who died oppose LIV Golf. Frolich, from Brooklyn, was working in the South Tower of the World Trade Center on Sept. 11. He is a fan of golf, but cannot play anymore due to a disability resulting from the attack. Frolich said that golfers should refrain from playing in the league.

“Every athlete has an obligation to stand up for the truth,” he said. “Our hope is the golfers wake up and realize they are taking blood money.”

Brett Eagleson, from the US state of Connecticut, leads the 9/11 Justice organization, which advocates for releasing evidence related to the attacks. His father died while working at the South Tower of the World Trade Center on Sept. 11. Today, members of the organization will protest outside of the Trump National Golf Club in Bedminster as the LIV Golf event kicks off.

Spokespeople for Trump National Golf Course and LIV did not respond to Al-Monitor’s request for comment.

Eagleson said that 9/11 Justice wants to use the debate over LIV Golf to advocate for their cause.

“There’s so much controversy around this, let it be our microphone,” Eagleson told Al-Monitor. “It’s about putting pressure on our own government and the kingdom to come clean about what happened 21 years ago.”

Though Salman was not in power in 2001, Eagleson said he wants the de-facto Saudi leader to acknowledge the “bad elements” within the Saudi government related to 9/11.

“We’re not pointing the finger at MBS with 9/11. He was not in power,” said Eagleson, referring to the crown prince by his initials. “He’s the one in power now, so his country, through him, bares responsibility.”

“It would be wise for MBS to point the finger at those who did it, cause it certainly wasn’t him,” added Eagleson.

Eagleson, Frolich and others in the 9/11 community are particularly mad at former President Donald Trump for hosting LIV Golf at his own course. In 2016, while running for president, Trump notoriously accused Saudi Arabia of being behind the attacks.

“Who blew up the World Trade Center? It wasn’t the Iraqis, it was Saudi — take a look at Saudi Arabia, open the documents,” he said at the time.

Trump also met with Eagleson and other 9/11 victims and families after entering the White House, but he then declined to release documents related to the attacks, like former presidents George Bush and Barack Obama before him. Trump maintained good relations with the kingdom during his administration.

A reporter for the US sports news outlet ESPN asked Trump yesterday about the protest from 9/11 families of the LIV Golf event, to which he replied, “Nobody's gotten to the bottom of 9/11.”

“That is the most ridiculous comment I’ve ever seen a president make,” Eagleson said in response.

9/11 Justice sent a letter to Trump this month asking him to reconsider his relationship with LIV Golf. Eagleson said a Trump aide subsequently called him to acknowledge the former president had read it.

Eagleson said he realizes it is unrealistic to think they can stop LIV Golf. He said a more plausible hope is that a golfer or business will sever its relationship with the league due to their advocacy.

“Saudi Arabia has more money than anyone, we’re never gonna outspend,” he said. “We have the memorials of 3,000 dead Americans on our side. That’s what motivates us.”