The Golf Channel’s Brandel Chamblee has been one of the most virulent critics of LIV Golf and is now being sued by Patrick Reed, who plays for the breakaway tour. 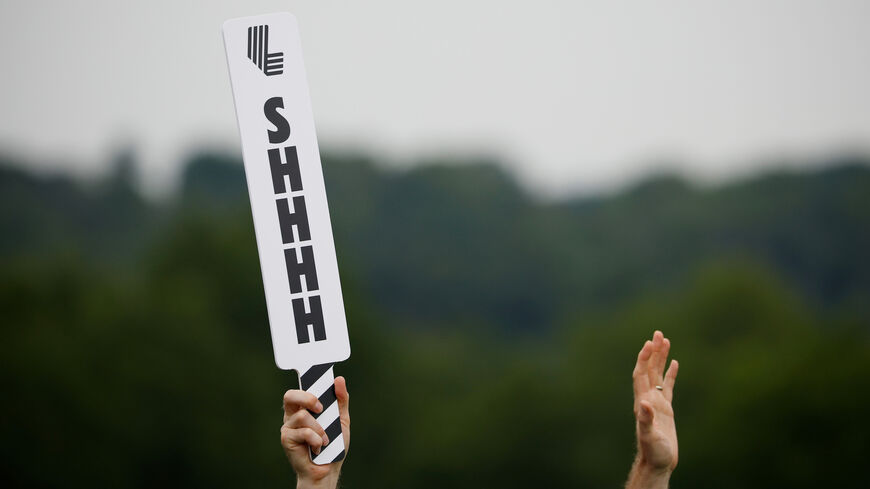 A paddle sign reading "SHHHH" is displayed during day one of the LIV Golf Invitational-Bedminster at Trump National Golf Club Bedminster on July 29, 2022 in Bedminster, New Jersey. - Cliff Hawkins/Getty Images

A golf journalist who is critical of the Saudi-funded LIV Golf league has been sued in a US court.

American golfer Patrick Reed filed a defamation lawsuit against Golf Channel and its commentator Brandel Chamblee. The complaint was filed in a court in the US state of Texas, where Reed is from, the US sports news outlet ESPN reported yesterday.

What is LIV Golf: LIV Golf is a golf league funded by Saudi Arabia’s Public Investment Fund. The sovereign wealth fund is led by Crown Prince Mohammed bin Salman. LIV Golf is seeking to compete with the PGA Tour, which is the dominant golf league in the United States.

LIV has succeeded in attracting major golf stars such as Phil Mickelson, Sergio Garcia and Bubba Watson, among many others. The league is appealing in part due to the large amounts of guaranteed money it offers.

From the beginning, LIV Golf has attracted controversy due to its Saudi funding source. Much of the criticism relates to the country’s human rights record, including its treatment of women and actions in the war in Yemen. Just this week, a Saudi student was sentenced to 34 years in prison for retweeting activists on Twitter. Victims of the Sept. 11 attacks have also vocally protested LIV Golf.

What happened: Much of US golf media is against LIV Golf, and Chamblee is perhaps the loudest critic. Much of Reed’s case revolves around remarks Chamblee has made with regard to LIV Golf’s Saudi funding source.

For example, the complaint cites comments Chamblee made in June on the Golf Channel, in which he accused Reed and other members of LIV Golf of “aligning” themselves with Salman. Chamblee also compared the Saudi leader to 20th century dictators Adolf Hitler and Josef Stalin.

The complaint asserted that it is “false, malicious, and defamatory” to accuse Reed of “aligning” himself with the prince.

“He is playing golf for LIV, which simply happens to be financed by the PIF, which has invested in and financed some of the world’s largest and respected corporations,” read the complaint, using an acronym to refer to the Public Investment Fund.

Indeed, the Public Investment Fund revealed this week hundreds of millions of dollars worth of investments in Google, Facebook and numerous other major American companies.

Some of Reed’s case focuses on remarks by Chamblee that are not related to LIV, per ESPN.

Why it matters: The lawsuit is another example of LIV Golf fighting back against the extensive criticism it has received. Earlier this month, Mickelson, Bryson DeChambeau and several other LIV golfers filed an antitrust lawsuit against the PGA over the PGA suspending them for playing at LIV Golf events.