US golf media has been critical of LIV Golf, which is backed by Saudi Arabia’s sovereign wealth fund. But for many golfers — especially lesser-known ones — the league offers unparalleled financial opportunities. 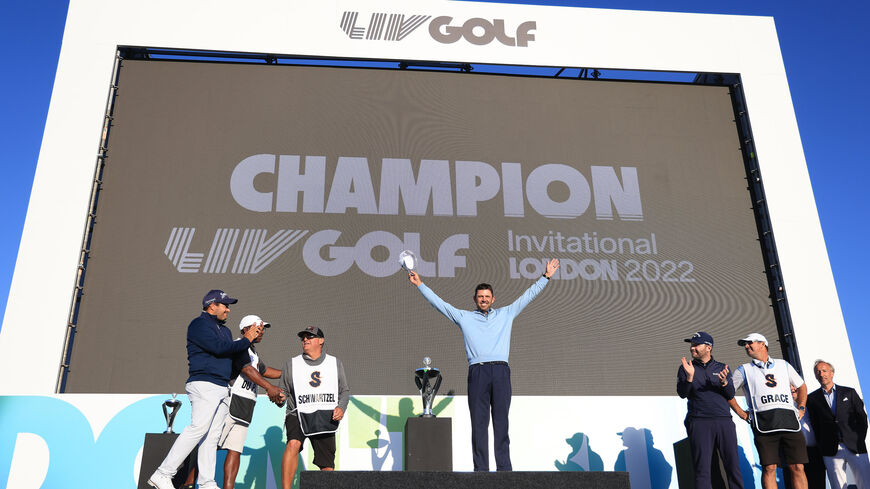 LIV Golf is coming to the US city of Portland this weekend, and just won over another top golfer — Brooks Koepka. Playing on the new circuit, which is funded by Saudi Arabia’s sovereign wealth fund, is especially attractive to lesser-known golfers who struggle to make a living playing the sport.

“People may not realize how expensive it is to be an aspiring golfer,” Brandon Cubitt, who heads New Nine Golf, told Al-Monitor. “LIV is appealing because it’s so much more money.”

LIV Golf was founded last year, and held its first tournament outside of London earlier this month. It is funded by Saudi Arabia’s Public Investment Fund, which is investing in an array of sectors to help the kingdom diversify and reduce dependence on oil. LIV Golf is headed by the Australian golf legend Greg Norman. The retired golfer has long been a critic of the PGA Tour, which is the dominant men’s golf competition in North America. LIV Golf only has male players at present, though Norman has expressed an interest in adding female golfers as well.

LIV Golf has been controversial from the start due to its Saudi funding source. The Gulf state has an array of human rights issues, including a high execution rate, legal discrimination against women and the infamous murder of columnist Jamal Khashoggi in 2018. Saudi Arabia has made limited progress on some of these issues in recent years, granting women the right to drive in 2018 and easing male guardianship laws last year, for example.

Many top golfers have left the PGA for LIV due to the potential to make millions. Americans Phil Mickelson, Dustin Johnson and Bryson DeChambeau have reportedly been offered more than $100 million each to join.

But LIV Golf is perhaps most appealing to less famous and less compensated golfers. Many LIV Golf players are not household names, such as Spain's David Puig, who most recently golfed for Arizona State University.

Cubitt is a scratch golfer in Alberta, Canada, who creates golf content on YouTube, Instagram and other channels. He pointed out that aspiring professional golfers who want to play on the PGA Tour must first compete in “Q School” competitions, which cost thousands of dollars just to enter.

“If guys are not making money, they have no way of paying these fees,” said Cubitt. “Some of these guys don’t necessarily come from money. They’re eating fast food five times a week.”

LIV Golf’s first event had a minimum payout of $120,000, which is more than five times higher than that of some PGA events.

Golfers who want to play in LIV face considerable criticism. Earlier this month, a Sept. 11 victims group slammed Mickelson for working with Saudi Arabia due to the Saudi government’s alleged role in the attacks. Northern Irish golf superstar Rory McIlroy recently called LIV Golf participants “duplicitous.” US golf media has been especially critical of the league. One Golf Channel analyst accused LIV Golf participants of “exchanging a little bit of their soul for money.”

There is a disconnect between the criticism of LIV Golf in US media and some of the players, according to one sports journalist.

“It’s easy for people not offered that money to say they’re not gonna take that money,” Chase Howell, who writes for The Action Network, told Al-Monitor.

Howell is also a caddy on the Korn Ferry Tour, which is a developmental golf tour whose players aspire to make it to the PGA. He referred to LIV’s minimum payout as “life-changing money” for such golfers, and said many golfers on his tour would seriously consider playing for LIV.

“Talk to tour players and people making careers out of golf — they’re a lot more supportive,” said Howell. “Golf media has been very anti-this league. I don’t think that's what the majority of the public thinks.”

At least one Korn Ferry Tour alum, Turk Petit, is now playing for LIV Golf, and others may soon join. Howell also pointed to the case of English golfer Sam Horsfield, who has made $397,157 in career earnings, including at international PGA events, according to Golf Channel. The minimum payout for LIV Golf’s first event, which Horsfield competed in, is equivalent to more than 25% of that.

LIV is also beating the PGA in terms of compensation for caddies.

“Caddies are treated very well on LIV. All travel and hotels are paid for. They’re going above and beyond for every caddy,” said Howell. “The PGA has never paid for travel.”

LIV Golf has several more events scheduled this year, including two at Trump Golf courses and one in Saudi Arabia itself in October. The PGA has already responded to LIV Golf’s emergence, refusing to allow its players to compete in the rival league and also promising more guaranteed money to those who stay.

Some observers think the outrage over LIV Golf may dissipate. David Samson hosts the Nothing Personal podcast on CBS Sports and previously served as president of the professional baseball teams the Miami Marlins and the Montreal Expos. He said that LIV golfers can survive the outrage over Saudi Arabia’s human rights record.

“Golfers have taken advantage of the fact that, with the public, there’s generally initial rage that then disappears,” Samson told Al-Monitor. “There’s a huge amount of guaranteed money waiting on the other side of that.”

Samson added that LIV has improved its public relations, which he described as “terrible in the beginning.”

Earlier this year, Mickelson actually described Saudis as “scary” when asked about his connection to LIV Golf. The comments drew a tremendous backlash.

Now, Norman is going on the offensive. Last month, he acknowledged Saudi Arabia’s human rights issues and praised the “cultural change” in the country. This month, he pointed out that the PGA Tour’s own sponsors do tens of billions of dollars worth of business in Saudi Arabia, which the golfer called “hypocrisy.”

“LIV did a good job with PR saying ‘we all have hypocrisy,’” said Samson.

Whether LIV Golf can compete with the PGA in the years to come remains to be seen. Many other rival sport leagues in North America have failed, such as the XFL American football league. Samson said LIV’s success “depends on the level of investment” from Saudi Arabia’s sovereign wealth fund.

Some in the golf world also feel that LIV may not be as exciting to watch as the “major” golf championships, such as the US Open and PGA Championship. For example, wins on the LIV Golf circuit do not count toward world golf rankings. Howell described LIV as more of an “exhibition.”

“They’re not playing to win as much. There’s not a bad side to losing. Part of the reason we love golf is the nerves we get,” he said. “People like the blowups, to see if people make mistakes. That’s why the majors are enticing.”

Many of golf's biggest names remain loyal to the PGA Tour. American Tiger Woods, who is chasing the record for most major titles of all time, turned down close to $1 billion to join LIV Golf, Norman told The Washington Post in May.

Cubitt said that golfers will need to choose between career achievements and the Public Investment Fund’s fortune when deciding whether to join LIV Golf.

“Guys really have to weigh what winning notable championships means,” he said. “It’s lifestyle and guaranteed money versus legacy.”