The Paris Club of major creditors announced the suspension of a 2021 agreement with the now-deposed transitional government to restructure the large foreign debt of Sudan. 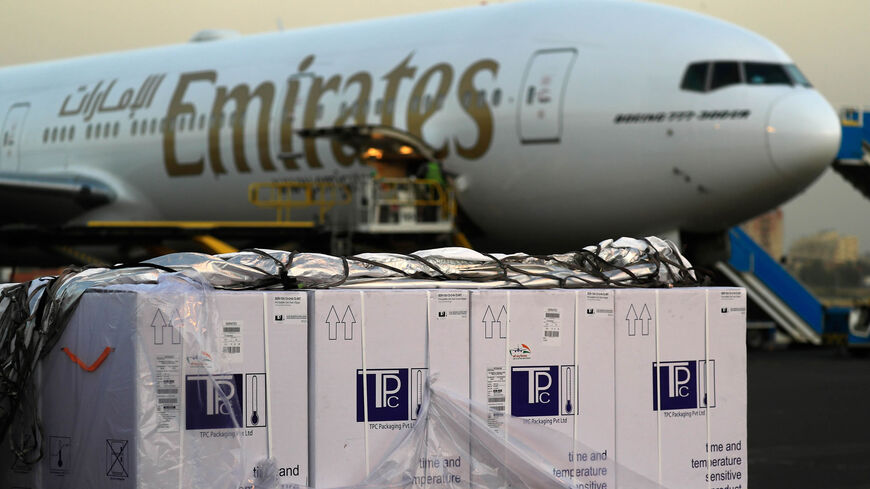 Boxes of coronavirus vaccines are stacked on the tarmac after the first batch arrived at Khartoum airport on an Emirates Airlines flight, Khartoum, Sudan, March 3, 2121. - Ashraf Shazly/AFP via Getty Images

Reacting for the first time to last October’s military coup, the Paris Club of major official creditor countries announced June 14 the suspension of the bilateral agreements signed a year earlier with the now-deposed transitional government of Sudan to initiate an ambitious process of restructuring the country’s large external public debt.

The group of rich countries stated in its annual report for 2021 that, in light of the recent events in Sudan and the removal of the transitional government by the military forces, its members assessed that agreements to implement the debt restructuring program cannot be signed until the situation improves and the country resumes its program with the International Monetary Fund (IMF). The stock of debt owed by Sudan to the Paris Club creditors, an informal group whose declared objective is to find solutions to payment problems faced by debtor nations, amounted to some $23.5 billion at the end of 2020.

The decision by the Paris Club represents an expected but severe blow to the coup leaders and comes on top of the billions of dollars in investment and aid that Western countries suspended following the military takeover. It also comes at a time when the country is going through an alarming economic crisis aggravated by the repercussions of the Russian invasion of Ukraine. And it pushes the generals, who have so far been unable to cement their authority due to widespread and sustained social opposition, further to their patrons in the Gulf in an attempt to fill the financial gap left by Western creditors and donors.

“The Paris Club’s decision to suspend debt relief comes at a time when Western donors, including the World Bank and the United States, have already cut financial assistance to Sudan, so it essentially adds to the pressure that fiscal finances are under,” Zaynab Mohamed, political analyst at Oxford Economics Africa, told Al-Monitor. “A lack of access to funds has left the government unable to stimulate economic activity through public spending or fulfill its promises to offer citizens some relief.”

Sudan received preliminary debt relief from the Paris Club following the adoption and implementation of a stringent package of economic reforms dictated by the IMF and the World Bank that allowed it to be declared eligible for the Enhanced Initiative for Heavily Indebted Poor Countries (HIPC). The HIPC Initiative, enhanced in 1999, entails coordinated action by the international financial community, including multilateral institutions, to reduce to sustainable levels the external debt burden of low-income countries.

“When I was finance minister, I signed the agreement of the Staff-Monitored Program [with the IMF] in June 2020. And that was the real start,” said Ibrahim Elbadawi, Sudan’s finance minister from September 2019 to July 2020. He told Al-Monitor, “We were able to achieve an agreement under the so-called Upper Tranche [standards], it allowed us to proceed on a fast track whereby only one year after Sudan reached the decision point in June 2021, and then in June 2024 Sudan would reach would have reached the completion point. Now everything is stalled by the coup, so the cost is quite tremendous.”

The HIPC Initiative consists of two phases. The first, known as the decision point, opens access to interim debt relief and Sudan reached it in June 2021. The Paris Club then signed its agreement to restructure Sudan’s external public debt July 15, when the country was still led by the alliance between civilian and military forces that piloted its fragile democratic transition. Final debt relief as part of this framework is provided at the end of its second phase, the completion point. On an exceptional basis, the Paris Club had also decided that Sudan should not make any new debt payments until at least December 2024.

“Debt relief was tremendously important. The Sudanese external debt accounted for more than 160% of the country’s gross domestic product [GDP], stood at more than $60 billion, and the debt relief through the HIPC and other multilateral debt initiatives were projected to reduce Sudanese debt to just $6 billion, which in the present value of 2020 would constitute about 14% of the GDP,” Elbadawi said. “It really was a very big deal.”

The neoliberal reforms dictated by the IMF in Sudan in order for the country to reach the decision point that allowed it to negotiate an agreement with the Paris Club to restructure its debt, however, hit broad sectors of society and caused unease among many citizens. Improving Sudan’s economy was one of the main and most urgent goals of the transitional government, which was forced to try to correct an economy with deep structural imbalances, largely a legacy of three decades of mismanagement, lack of investment, sanctions, corruption and isolation under former dictator Omar al-Bashir. But now the incentives that were promised in exchange for taking on that burden have vanished.

“Not only has the debt relief been frozen, but also the financial aid that was coming to the country to help the people deal with the economic reforms. Because the previous government agreed with the international financial players that it would implement harsh economic reform, but it would get financial assistance for the people,” Abda el-Mahdi, managing director at the independent UNICONS consultancy firm, told Al-Monitor. “The reforms have not been reversed, the subsidies have been removed and the foreign exchange has been floated, but the help for the people has been stopped.”

Mahdi noted that the Sudanese are not responsible for the accumulated external debt. “This debt relief that has been frozen [involves] debt that had been contracted in the 1970s and 1980s, and the accumulation of the debt are arrears. The real debt was very small and it was contracted during the time of [Jaafar] Nimeiry’s dictatorship when the Western world was willing to help this dictator because of the Cold War. Sudanese people are paying the price of Western mistakes,” she said. The Paris Club estimates that more than 99% of Sudan’s external debt with its members consists of arrears and late interest.

In the wake of the October military coup, and the subsequent suspension of billions of dollars in loans and aid from international financial institutions and Western countries, Sudan’s already collapsing economy and the living conditions of the majority deteriorated further. And the repercussions of the Russian war on Ukraine have only accelerated its free fall.

Inflation in the country is skyrocketing and stands at almost 200%, according to official figures, which, coupled with a sharp depreciation of the local currency, the Sudanese pound, has pushed up the prices of food, basic products and transportation. The country is also immersed in a serious crisis in the supply of services such as water and electricity.

“The October coup triggered a backslide in the progress made by the now-dissolved transitional government,” Mohamed, from Oxford Economics Africa, said. “The economic situation is likely to continue to worsen going forward until the military agrees to relinquish some power to civilian leaders.”

In this delicate context, the United Nations Food and Agriculture Organization and the World Food Program warned on June 15 that a third of Sudan’s population, 15 million people, is currently facing a food crisis. The organizations stated that the crisis is the result of the combined effects of the economic and political crisis in the country, rising costs, poor harvests — largely attributable to poor governance — conflicts and climate shocks.

“This harsh treatment of Sudan is really affecting the people more than the government, because the suspension of the debt relief means that you are starving the country of resources to restore economic activity and relief the social anxiety and poverty. Suspending the debt relief affects Sudan’s credit standing and its ability to access foreign financing and investment and this is eventually harsher for the people,” Mahdi said.

In an attempt to fill the huge vacuum left by Western creditors and donors, Sudanese coup authorities are knocking on the doors of their few but powerful allies, mainly in the Gulf. In recent months, coup leaders have paid visits to countries such as Saudi Arabia and the United Arab Emirates (UAE), largely in search of financial support.

Sudan’s Finance Minister Gibril Ibrahim, who led the delegation that signed the Paris Club agreements in July 2021, said in a recent interview with Radio Omdurman that he hopes Arab and Islamic institutions will fill part of the void left by international financial institutions, Sudan Tribune reported. He said there are ongoing meetings with the Saudi Public Investment Fund, the Kuwait Investment Fund and the Islam Development Bank.

And while so far these efforts did not seem to have had any effect, Reuters reported June 21 that the UAE is planning to build a new port on Sudan’s strategic Red Sea coast as part of a $6 billion investment package. The package includes $4 billion for the port, which would include a free trade and industrial zone and a small international airport, and $1.6 billion to expand and develop an agricultural project in northern Sudan. It also includes an immediate $300 million in the form of a deposit in Sudan’s central bank, which if confirmed would be the first such deposit since the military coup in October.

She concluded, “If [the agreement with the UAE] is true, then the UAE is not withholding its assistance because of the political situation. And the Saudis are working hard with the United States to broker an agreement between civilian forces and the military. So, the Gulf is taking a different stance from the Western countries."