Turkey’s May consumer inflation came in lower than expected, but newly announced gas and electricity hikes bode a renewed resurge in prices across the board. 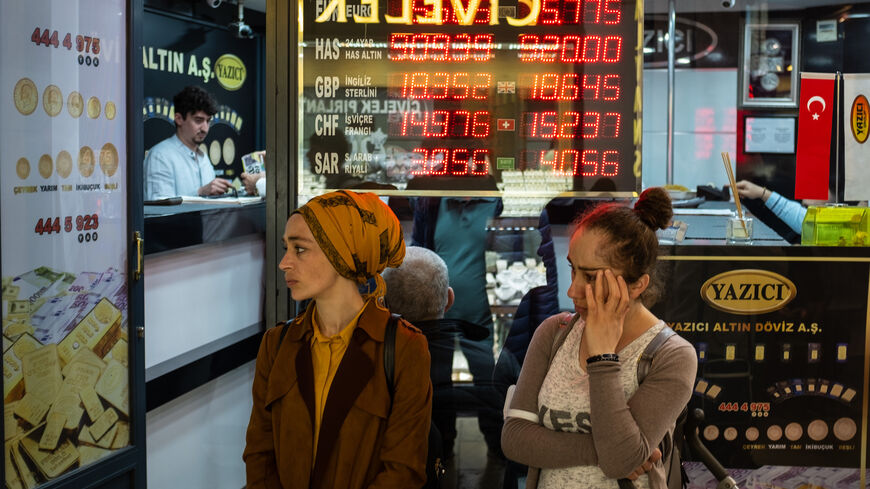 People stand next to a currency exchange office at Istanbul's Grand Bazaar on May 5, 2022, in Istanbul, Turkey. - Burak Kara/Getty Images

Turkey’s consumer inflation has hit a 24-year high of 73.5% and the Turkish lira has lost 49% of its value since September as President Recep Tayyip Erdogan pursued a controversial policy to lower interest rates and promote growth at the expense of inflation spiraling out of control.

Consumer prices rose 2.98% in May to bring annual inflation to 73.5%, the highest since 1998, according to data released Friday by the Turkish Statistical Institute (TUIK).

The monthly rate was below the projections of economists, rekindling a debate on how reliable the official data is. The median estimates in polls conducted by Reuters and the state-run Anatolia news agency had stood at 4.8% and 5.49%, respectively. Many observers also noted that TUIK, whose chief was controversially fired earlier this year, stopped releasing detailed price tables this month.

“Why is it exactly now that you thought of discontinuing data that has been released since 2003?” asked veteran economic commentator Alaattin Aktas, calling the monthly inflation of 2.98% a “miraculous” decrease from over 7% in April. Some also questioned the widening gap between consumer and producer inflation, which has reached nearly 60 percentage points. Producer prices rose almost 9% in May, with the annual increase topping 132%.

Either way, the announcement of natural gas and electricity hikes of up to 40% earlier this week are a harbinger that consumer inflation will accelerate anew across the board. Annual inflation reaching 100% in the coming months would not be a surprise.

In May, the highest monthly increase, 6.5%, was in the alcoholic beverages and tobacco group. Food prices, a key driver of Turkey’s inflation storm, rose at the relatively modest rate of 1.6% in May, according to TUIK, with annual food inflation reaching 91.6%. In the transportation group, which is assigned the second largest weight in the inflation basket after food, prices rose 3.4% in May, bringing the annual rate to nearly 108%. Prices in the hotels, cafes and restaurants group rose almost 5.5% in May, with the annual rate climbing to 76.8%. Housing, clothing and household equipment prices also continued to rise in May.

A self-declared “enemy of interest rates,” Erdogan has hoped that reducing them will help achieve robust economic growth and boost his sagging popular support ahead of presidential and parliamentary elections scheduled for June 2023. Following the downturn caused by the COVID-19 pandemic in 2020, the Turkish economy grew 11% in 2021 and 7.3% in the first quarter of 2022, but not without the side effect of galloping inflation.

At the behest of Erdogan, the Central Bank cut its policy rate by 500 basis points over four months, bringing it to 14% in December from 19% in September. Consumer inflation stood at 19.6% in September, while the price of the dollar averaged 8.5 liras.

Inflation has jumped by nearly 54 percentage points since then, driven mainly by a wave of dollarization fueled by the rate cuts and the resulting negative yields of the lira. The currency has lost 49% of its value since September, plunging to some 16.5 versus the dollar in early June despite a government-backed scheme to stop the flight from the lira through so-called FX-protected lira deposits in which the treasury compensates for losses incurred from the currency's depreciation.

The Central Bank, meanwhile, has all but lost its relevance as the body responsible for maintaining price stability. Heeding Erdogan’s opposition to hiking interest rates, it has forsaken its main inflation-fighting tool even as the ripples of the Ukraine war exacerbate Turkey’s economic woes.

The bank’s monetary policy committee kept the 14% policy rate unchanged at its May 26 meeting. Its reasoning raised many eyebrows among economic pundits.

The committee attributed the price increases largely to external headwinds and stockpiling. Arguing that “strengthened measures” were in place to stabilize prices and usher in a disinflation process, it also pinned hopes on a prospective decrease of base effects and “restoration of the global climate of peace.”

In reality, however, Erdogan is averse to disinflationary measures, which would mean economic cooling, contraction, industrial capacity reductions and a deeper unemployment problem in the lead-up to elections. Instead, he is betting on a risky policy to sustain growth in a highly inflationary environment. High negative rates have helped keep demand alive, but the inflation uptick has reached formidable proportions. The purchasing power of the masses is melting fast and even the pay hikes expected in July might prove futile.

Shielding savings against inflation has become an uphill task. FX-protected deposits reached nearly 875 billion liras ($52.9 billion) last month, but still accounted for only 13% of all deposits. Despite the safeguards, the rate of yields under the scheme remains below the inflation rate. Hard-currency deposits, meanwhile, account for 57% of all deposits. Many of the well-off have rushed to buy real estate to protect the value of their money, contributing to dizzying price increases on the housing market.

Home prices in Turkey rose 110% over a year in March, according to Central Bank data, a real increase of nearly 30% in inflation-adjusted terms. In Istanbul, Turkey’s most populous city, the surge in home prices has been even higher, reaching 122% over a year in March. Rent prices have similarly skyrocketed, leading to warnings of an accommodation crisis and other social repercussions.

A growing number of observers contend that Erdogan could hardly sustain his policy of growth amid high inflation until the polls in June 2023. He might be compelled to call early elections in the fall to avoid a bigger popular backlash next year.