The new bill in parliament aims to bring further restrictions on freedom of expression online and on social media as elections approach, experts say. 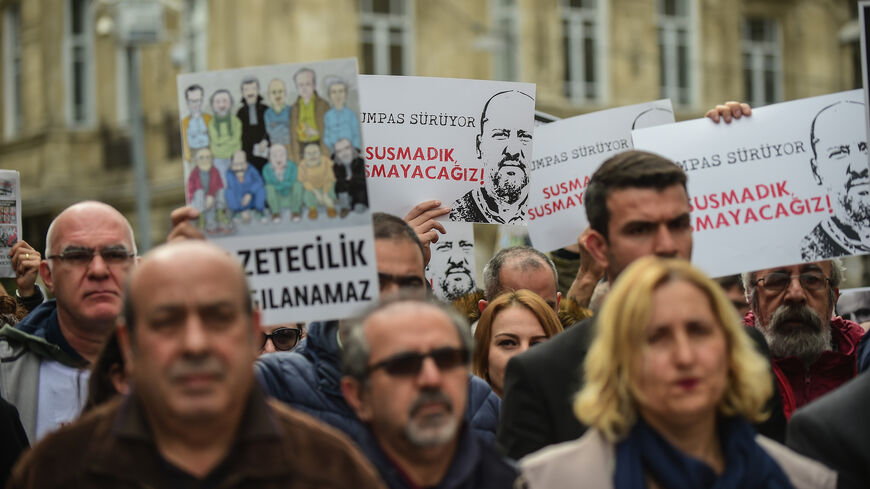 People and journalists hold banners reading "Freedom for jailed journalists - we will not be silenced" on April 9, 2017, during a demonstration for the freedom of the press in Istanbul. - YASIN AKGUL/AFP via Getty Images

Turkish journalist bodies are rallying against a new bill that they claim delivers a new nail to the coffin of press freedoms under the guise of fighting fake news.

The draft bill, which passed the parliament’s digital media commission with minor changes last week, allows for jail sentences of up to three years for those who “disseminate information that misleads the public” about public health, public order, or internal and external security of the country. “If the offense is committed by someone concealing their real identity or as part of the activities of an organization, the sentence would be increased by half,” the draft bill says. It also affords new powers to the administration to sanction the online media with various financial tools.

Opposition politicians and press watchdogs interpreted the law as a move to tighten the grip on journalists and choke criticism on the internet and social media as Turkey approaches elections due next spring. Several Turkish pundits claim that the recent judicial cases against the opposition indicate that the elections may take place as early as November. However, the government persistently denies that it will call for snap polls.

“It is clear that you have prepared this bill to silence the opposition as we enter the electoral period,” Ayhan Altintas, a deputy from the opposition IYI Party, told the deputies of the ruling Justice and Development Party (AKP) and its smaller political ally, the Nationalist Movement Party (MHP). “Your party leaders said that this bill was on the pipeline before the law even came on the parliament's agenda, so there is no use asking you to change it.” Instead, Altintas said the new law — which critics call “Censorship Law” — should be postponed to Jan. 1, 2024, after the elections.

The IYI Party’s vocal chair, Meral Aksener, attacked Erdogan for the bill, saying that the control of social media was hardly among the priorities of the Turks who have been on the verge of poverty. “But if you want to stop fake news, stop with your own backyard … the pro-governmental channels that slander your political opponents, and … your army of trolls,” she said in a televised speech of her party.

“If fake news were to be a crime punishable by imprisonment, [Erdogan] would be the first to be arrested,” she said, attacking the president for insisting once more, on the anniversary of the 2013 Gezi Park protests in Istanbul, that a bunch of demonstrators whom he called “riffraff and sluts,” spurring a public rage, had entered a mosque and drank beer there, although this has been firmly denied by the mosque’s imam.

The new draft bill is the most recent of several measures to control the media. In January, a presidential circular called on media watchdogs and news outlets to prevent “harmful content” in print, audiovisual and social media, and heralded new efforts to promote children’s programs that uphold national and family values. In March, a bill introduced a jail sentence of up to three years for journalists whose reporting would damage the reputation of financial companies even if they do not explicitly name the company. A social media law enacted in 2020 obliged social media platforms with more than 1 million domestic daily users, such as Facebook, Twitter and YouTube, to open offices in Turkey and appoint local representatives to implement government requests to block and remove content or face steep fines along with possible access cuts if they fail to comply.

Turkey ranks 153rd out of 180 countries in Reporters Without Borders’ 2021 World Press Freedom Index. “In 2021, 241 journalists stood trial, 73 journalists were detained, a radio broadcaster was killed and 115 journalists were physically attacked,” said an annual report prepared by the Media for Democracy Project by the Ankara-based Association of Journalists. The report pointed out that conditions are deteriorating for Turkey’s journalists who face restrictive laws, censorship, online threats and bureaucratic barriers to obtaining press cards.

The current bill mainly targets social and online media used by many critical news outlets and a space the government aims to control more.

Seven local press groups, including the International Press Institute’s National Committee in Turkey, accused the AKP and the MHP of preparing the new bill behind closed doors. “The bill adds a new crime titled ‘distributing deceptive information publicly’ to the criminal code with prison sentences. It also gives the administration new powers to sanction the media with fines, advertising bans and bandwidth throttling,” a joint statement said. It also claimed that the whole bill, with its ambiguous language, opened the gates for “gross abuse by a judicial system that is already suffering from political capture and a loss of independence.”

Gurkan Ozturan, the Media Freedom Rapid Response coordinator at the European Center for Press and Media Freedom, told Al-Monitor that the text contained “dangerous elements” for press freedoms on many fronts.

“In the draft bill, there is no clear definition of what constitutes ‘disinformation’ or ‘fake news,’ and this ambiguity creates the potential for this law to be turned into a legal harassment tool against independent media,” Ozturan said. “Ultimately, such a law, which seems to have a broad scope, would result in blanket censorship of a whole sector and cause a wave of self-censorship among journalists.”

The bill was penned by MHP Istanbul deputy Feti Yildiz, who defended the need to create a new regulation for fake news on the internet. “We need new regulations to combat those who use fake names and accounts to create illegal content or insult, slander, defame or discredit people with different political opinions, religions or nationalities,” Yildiz said at a debate in the parliamentary committee last week.

Despite carrying Yildiz’s name, many of the 40 articles have the fingerprints of the all-powerful Communication Directorate headed by President Recep Tayyip Erdogan’s information tsar, Fahrettin Altun. “In Germany, only nine out of 100 news stories are fake, 15 in England, 12 in France.  Turkey, where 49% of the news on social media is fake news, experiences this global disinformation problem the most," Altun has said on more than one occasion.

Ozturan, based in Leipzig, Germany, agreed that many countries took measures to combat fake news, but they were careful not to do it at the expense of journalism. “Germany enacted the Network Enforcement Act in 2017, which obliges social media networks to remove illegal content within 24 hours after receiving a user complaint,” he said. “Though there has been criticism of the law for not being detailed enough, the law has been unambiguous on just what is illegal and what is not. The law has not been used excessively; it has only been evoked five times. By contrast, in Turkey, our report on the impact of the 2020 social media bill found that ever since that law came into effect on Oct. 1, 2020, at least 1,197 investigative journalism reports — mostly on corruption allegations and mismanagement — were removed.”

If the new law is enacted, it will not be enough to remove the news; the journalist who wrote it could face jail sentences, and the online platforms could face heavy fines, he added.

In a carrots-and-sticks approach, the new draft bill will enable journalists working for online publications to apply for media accreditation and make online news platforms eligible for state advertisements, neither of which was the case before. But online platforms will also be under obligation to publish refutals by the government and would face heavy fines or limitations on bandwidth.

“It looks like a way to tighten the reins on critical online outlets and transfer money through state aids to pro-governmental online media,” Ozturan said.

Another deficiency of the bill is on accreditations. The bill gives the state-run Communication Directorate the final say on who can get the cards. It also proposes that “civil society and foundation chairpersons whom the President of the Republic deems as having beneficial contributions to the country would be eligible for applying for a press card.”