Turkey’s main opposition has taken the newly enacted bill to the Constitutional Court for annulment, while Erdogan described the law he swiftly ratified as “a pressing necessity.” 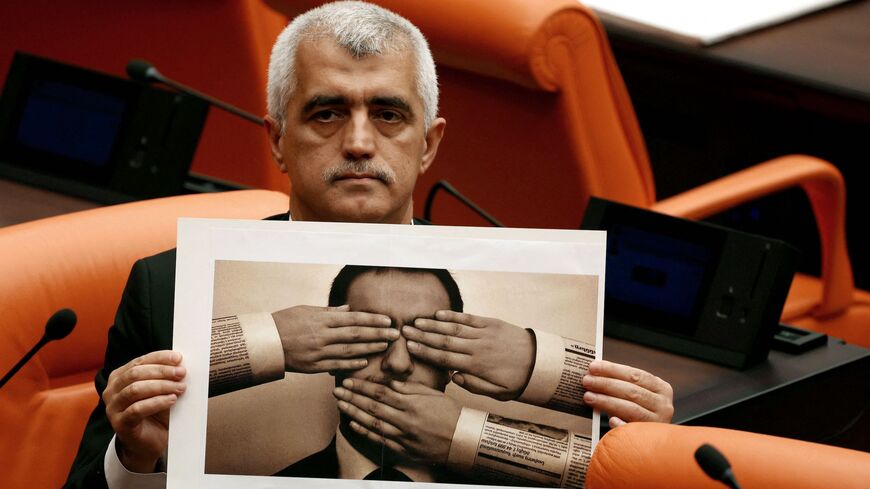 HDP MP Omer Faruk Gergerlioglu holds a photograph depicting censorship while attending a session on a government-sponsored bill that criminalizes "disinformation" at the Turkish Grand National Assembly on Oct. 13, 2022, in Ankara. - ADEM ALTAN/AFP via Getty Images

“As authors, we reject this censorship law that will plunge the country into deep darkness. [May] the truth of the people and the world [win] against the lie of the tyrants,” read a statement by those protesting the law.

The list of authors included many of Turkey’s internationally known novelists and intellectuals, some of whom had faced time behind bars or exile. Poet, musician, politician and former Goodwill Ambassador to UNESCO Zulfu Livaneli was imprisoned several times during the 1971 Turkish coup because of his left-wing politics and lived in exile throughout the 1970s, returning to Turkey only in 1984. Oya Baydar, a left-wing sociologist and writer, faced exile after the 1980 coup and lived in Germany for 12 years. Asli Erdogan, who lives in exile in Germany, was arrested during the police raid on pro-Kurdish Ozgur Gundem in 2016 for being a member of the advisory board of the newspaper, a role authorities deemed to "support terrorism." After four months, she was released pending trial and left Turkey.

“We will not be silenced,” the authors pledged.

The authors are the most recent voices in the chorus of rage and concern that follows the enactment of a 40-article media bill, which international rights groups have called “dangerous and dystopian.” Simmering since last July, the final bill passed parliament last Friday with the votes of the ruling Justice and Development Party (AKP) and its political ally Nationalist Movement Party (MHP). On Monday, President Recep Tayyip Erdogan ratified it without delay amid protests from international rights groups and local media organizations.

The bill, which makes amendments to the existing Internet Law, the Press Law and the Turkish Penal Code, arms the government with further means to tighten its grip on the small independent media, primarily online news outlets, under the guise of fighting “disinformation.”

The law considers “disseminating false information” a criminal offense with prison sentences of one to three years, increased by half if the account that has disseminated the information is anonymous. In addition, it establishes much tighter government control over online news websites by strengthening the powers of the government-controlled Information and Communication Technologies Authority. International digital companies such as Facebook and Twitter, which already face restrictions under the 2020 law, are now required by law to appoint Turkish citizens to run their local office, keep their data in Turkey and provide information about users if the government asks — or face blockages.

The new law also narrows down the space for messaging services. WhatsApp, Signal and Telegram will have to set up companies in Turkey to be officially listed in a government register. They will have to provide periodic information such as numbers of active users and voice and video calls, and instant messages. Noncompliance will result in fines up to 30 million Turkish lira ($1,615,000), a reduction of bandwidth or blocking.

International rights groups, such as the Council of Europe’s Venice Commission to Amnesty International, have maintained that the law’s vague provisions could have a chilling effect on free expression and enable the government to stifle the media and critics ahead of the upcoming elections.

The UN human rights office also expressed concern over the law last Friday. “Under international human rights law, freedom of expression is not limited to ‘truthful’ information but applies to ‘information and ideas of all kinds,’ both online and offline. Restrictions to freedom of expression shall only be envisaged on legitimate and necessary grounds,” Marta Hurtado, the UN Rights Office spokesperson, said. She also expressed concern that the amendments leave significant room for “arbitrary, subjective interpretation and abuse.”

Freedom House’s 2022 report, which covers Turkey between May 2021-June 2022, places Turkey among the countries “not free” on the internet, saying that blocking of online content, particularly news and citizen journalism, has increased in recent years.

“This is not merely a censorship bill, it is a ‘total silence’ law,” said veteran journalist Ferai Tinc. Emre Kizilkaya, vice chair of the International Press Institute, described it as “another step in Erdogan’s Putin-ization,” referring to the Russian president’s tight control over the media.

Erdogan defended it at his party’s parliamentary group meeting today as “a pressing necessity” and a demonstration of the government’s will to ensure the “peace and security” of Turkish people in the “social media sphere as well as in the physical realm."

“Lies, slander campaigns that target our national interests and values, and the privacy of our people [online] are no different than terrorist attacks,” Erdogan told his party group.

The main opposition Republican People’s Party (CHP), which tried in vain first to amend then to bury the bill since last June, applied Tuesday to the Constitutional Court.

Engin Altay, deputy chair of the CHP,  told media members that the party's initial filing was for the suspension and annulment of the infamous Article 29. The article calls for sentences of up to one to three years of imprisonment for any person “who publicly disseminates disinformation about the country's domestic and foreign security, public order and general health, with the sole aim of creating anxiety, fear or panic among the public and in a manner that is liable to disturb public peace.”

“This is the law of Stalin,” Altay said, adding that his party would apply to the Supreme Court for all the articles later. CHP sources said that they had prioritized Article 29 to force the court to give a speedy response on what they deemed the most crucial article.

“This law is Stalin’s law,” Altay said. “But it will not save the government.”

In his speech Wednesday, Erdogan fumed at the opposition, inviting CHP leader Kemal Kilicdaroglu to openly announce his candidacy and face him at the ballot box. He also lashed out at CHP deputy Burak Erbay, who in an act of protest had smashed a smartphone with a hammer during an earlier session.

“How dare you take a hammer to the rostrum,” Erdogan said, accusing Altay of "vandalism."