The GCC enumerated worries about Iran and its "destabilizing behavior," triggering typically strong rhetoric from Tehran. 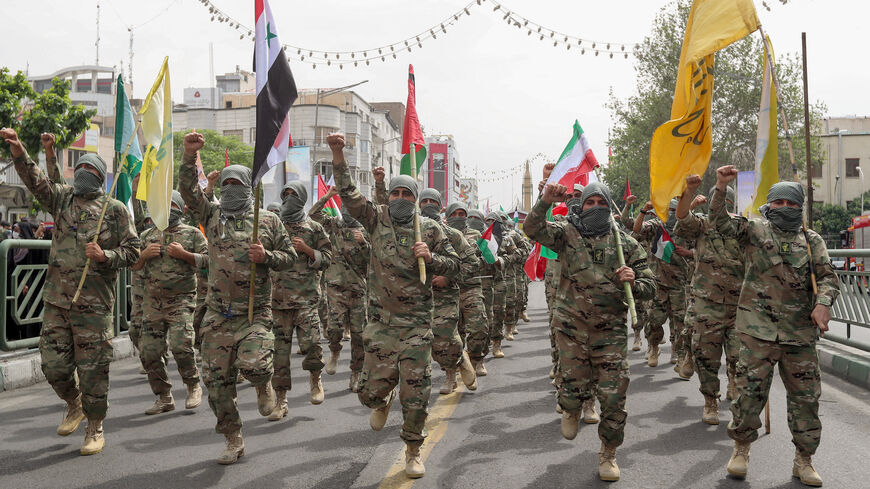 Iranian Basij paramilitary forces take part in a rally marking al-Quds (Jerusalem) day near a Shahab-3 missile (background) on a street in Tehran, on April 29, 2022. - AFP via Getty Images

Iran hit out at the Gulf Cooperation Council (GCC) after the latter underscored the need to tackle Tehran's missile program and its regional activities as major challenges to regional security.

"At a moment that the [Gulf Cooperation] Council is serving as an arsenal for American and Western arms, it is in no position to make any comments on [Iran's] missile program," declared Foreign Ministry spokesperson Saeed Khatibzadeh.

Concluding their latest meeting in Riyadh on Wednesday, GCC foreign ministers demanded their countries' active inclusion in talks over the revival of the Iran nuclear deal, formally known as the Joint Comprehensive Plan of Action (JCPOA). Echoing the very same concerns from another statement last June, they highlighted the urgency to counter multiple threats posed by the Islamic Republic, from its "destabilizing behavior," "sponsorship for terrorism" and support for militia groups across the Middle East, to its missile program and maritime practices endangering international navigation.

But according to the Iranian spokesperson, with such an "entirely flawed" approach and "irrelevant demands," the GCC "is only further reducing its increasingly diminishing credibility."

Regional Arab states, on top of them Iran's rival, Saudi Arabia, have expressed support for diplomacy toward a resurrected JCPOA. But worried by Iran's extraterritorial ambitions, they seek to rest assured that any such deal will be followed by other lasting agreements that will do away with non-nuclear Iranian threats as well.

In his statement, Khatibzadeh argued that the GCC's stance "is apparently aimed at neutralizing" Iran's diplomatic pushes engaging "friends and partners" in the same council. He did not name those countries, but only in the past month, Qatari Emir Sheikh Tamim bin Hamad Al Thani was in Tehran and Iran's President Ebrahim Raisi was in Oman, for what media reports analyzed as initiatives for mediation between the Islamic Republic and the United States to bring the two sides back on track of JCPOA diplomacy.

Despite more than a year of intense diplomacy in the Austrian capital, Vienna, JCPOA revival talks involving Iran and major powers were suspended in March after hitting multiple snags.

The Russian pursuit for exemption from Ukraine-related Western sanctions in its trade with the Islamic Republic and the Iranian demand that the United States drop the Islamic Revolutionary Guard Corps from its list of Foreign Terrorist Organizations are believed to have been the two major hurdles. Tehran, however, blames the pause on the "hesitation" of US authorities to make up their minds about the "political decision."