The Egyptian national soccer team’s defeat against Ethiopia awakened angry reactions at the political and sporting levels in Egypt, with some associating the victory to Ethiopia’s position on the Grand Ethiopian Renaissance Dam. 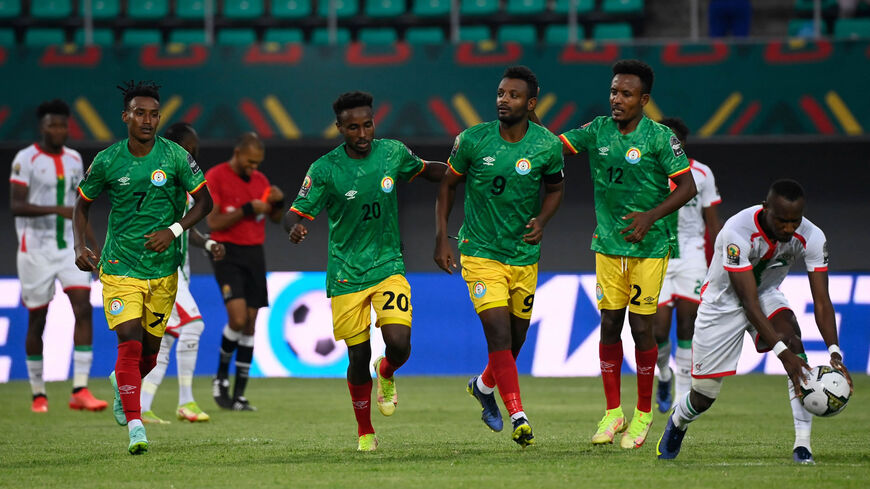 The defeat of the Egyptian national team by its Ethiopian counterpart has spilled over into the political crisis between Ethiopia and Egypt over the Grand Ethiopian Renaissance Dam (GERD) crisis. On June 9, Egypt lost 2-0 in the Africa Cup of Nations 2023 qualifiers.

The implications of the unexpected defeat echoed at the political level, with high-toned statements exchanged between officials and in the media outlets of the two countries.

Mohamed al-Arusi, member of the Ethiopian parliament and adviser to the Ethiopian Ministry of Water and Energy, praised his country’s win on Twitter. “We congratulate our national team with its overwhelming victory over Egypt, and we say hard luck to the Egyptian national team! It is a sport and it needs sportsmanship, not hostility!” he tweeted.

Arusi continued, “Let us not involve the GERD in sports, as your fans do on social media. The third goal is the third filling of the GERD.”

Ecstatic fans in Ethiopia took to the streets and to social media to celebrate the victory. A Facebook page called Ethiopia even described the match as “the battle of dignity of the Renaissance Dam.”

This is the first time in 33 years that Ethiopia wins over Egypt in an Africa Cup of Nations qualification match. The last time Ethiopia stunned Egypt was in 1989.

In Egypt, the Ethiopian soccer victory stirred angry reactions at the political and sporting levels. On June 11, head of the Egyptian Football Association Gamal Allam said by phone during the TV show "Ala Masuliyaty" (“At My Responsibility”), “The federation is looking for a foreign technical coach for the Egyptian team as an alternative to the national coach Ihab Galal after the defeat by the Ethiopian national team.”

Member of parliament Ihab Ramzi explained that parliament wants to question Sobhi about the poor performance of the Egyptian national team, which caused a state of extreme despair and frustration in Egypt. “This requires a serious position by all those responsible for Egyptian sports,” he said.

Meanwhile, Independent Arabia linked the Egyptian soccer defeat to the GERD crisis in an article dated June 10, titled “The Renaissance Dam cast its shadow on the Egypt-Ethiopia match.”

The article stated that the 2023 Africa Cup of Nations qualification match between Egypt and Ethiopia was mixed up with the crisis over the GERD that Addis Ababa is building on the Blue Nile, which raises Cairo’s fears regarding its water share of the Nile River.

For Addis Ababa, the soccer victory coincides with its announcement of moving toward the completion of the third filling process of the GERD in August. All attempts to push the GERD crisis to the negotiating table again are currently frozen, with no signs of a solution on the horizon. Egypt is officially demanding a return to negotiations to reach a legally binding agreement on a dam filling mechanism.

Haitham al-Hariri, member of the political bureau of the Socialist Popular Alliance party and former member of parliament, confirmed that the link between the GERD crisis and the defeat of the Egyptian team is logical in the absence of any potential solutions to the crisis.

Hariri told Al-Monitor, "The celebrations in the Ethiopian streets and the statements of Ethiopian officials regarding the victory of their team and linking this to the GERD crisis is only natural since Ethiopians feel that they have scored a double win over Egypt — athletically and politically.”

He pointed out that Egyptians are already angry with Ethiopia over the GERD, and that the defeat of the Egyptian national team fanned the flames of their frustration. The Ethiopian national soccer team is ranked 140th by FIFA.

Egyptian newspaper Al-Watan reported June 15 that the defeat led to the drop of the Egyptian team by eight positions in the FIFA world rankings, to 40th place.

"Egypt must try to create any opportunities or solutions to the GERD crisis, especially since the defeat reignited feelings about it,” Hariri noted.

He concluded, “The Egyptian media is obliged to express the Egyptian popular anger, in particular in light of the overblown Ethiopian media hype over the soccer win as if it were a political victory rather than a victory in a sports match."