The rallies were sparked by unprecedented rising prices across the food sector under President Ebrahim Raisi's economic policies. 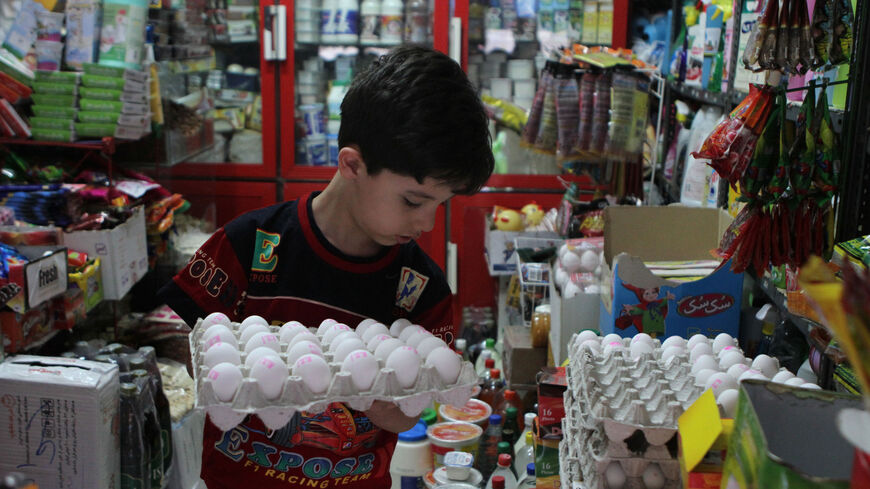 An Iranian boy takes a tray of eggs at a grocery store in Tehran on Sept. 30, 2012. - ATTA KENARE/AFP/GettyImages

Pensioners took to the streets in many provincial capitals across Iran for a second day this week to protest what they perceive as the government's failure to even out their pay with rapidly rising prices.

"The revolutionary government is such a liar," protesters were heard chanting in a video from one such demonstration in the central city of Ghazvin. The slogan appeared to question the government of President Ebrahim Raisi, which is taking pride in adhering to "revolutionary principles" promoted by Supreme Leader Ayatollah Ali Khamenei and his hard-line supporters.

Elsewhere in other rallies, the protesters demanded the resignation of the president and "incompetent" authorities in his administration. In the western, underdeveloped city of Ilam, the pensioners staged their sit-in around an empty tablecloth, a symbolic move meant to reflect their struggle to make ends meet.

A similar gesture was put out by protesters in the southern city of Shiraz on Monday, as the retirees held a symbolic funeral for a tablecloth to highlight the disappearance of food from their baskets. In the capital, Tehran, protesters gathered outside the parliament building, where several retirees were reportedly pushed into police vans and "transferred to unknown locations."

Iran's typically rising inflation in the past decades has forced consecutive administrations to push up public wages to certain levels. Last week, the Raisi government ratified a bill aimed at raising retiree payments within a 10 to 60% range. But the demonstrators insist that the scheme is unequal and lags far behind the exponential hikes. The debate on the uneven pay raise plan is now being taken up by the conservative parliament, whose social committee has summoned Minister of Labor and Welfare Hojjatollah Abdolmaleki to address public concerns.

While annual jumps in the prices of basic staples have turned into a normal event for ordinary Iranians in the past four decades, the recent near-tripling rates have been unprecedented. The inflation has largely been triggered by a government scheme in which subsidies on four products, including flour and cooking oil, were lifted. In return, the government is injecting cash handouts into the bank accounts of households. The plan, according to its architects, will lead to a just redistribution of public wealth. Yet even state media have reported on how the hikes are engulfing each and every food product.

Expression of disillusionment is also being increasingly heard on social media, with Iranians sharing their experience of the way their pockets are shrinking and their purchasing power dwindling as some government loyalists are also joining the chorus. Most notably, in a rare and sarcastic tweet, the Khamenei-appointed Friday prayer leader of the northern city of Astara made an allusion to religious and historical scriptures, comparing the inflation in a matter of weeks in Iran to the price jumps to which Ashab e Kahf — the Islamic version of the Biblical story of the Seven Sleepers — famously woke up to after 300 years.

The ripple effect of the recent spikes in food prices is affecting even wider markets, including the country's troubled housing sector, at a moment when the value of the Iranian currency continues to depreciate mostly due to Western sanctions on the one hand and domestic corruption on the other.

The retirees' protest was last in a chain of demonstrations of public discontent, preceded by that of teachers, bus drivers and industrial laborers, as the pinch of inflation is being felt by a growing number of social classes.