Shahbaz Sharif, who needs international economic and political support to stabilize his coalition government, is busy making deals with Ankara. 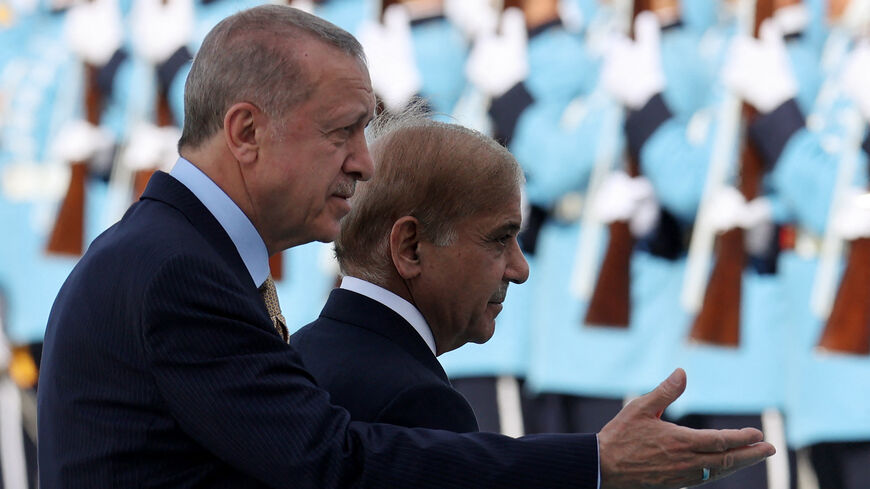 Marking his first official visit to Turkey since he took office, Pakistani Prime Minister Shahbaz Sharif landed in Ankara Tuesday for a three-day trip accompanied by a high-level delegation including Foreign Minister Bilawal Bhutto Zardari, Defense Minister Khawaja Asif and Minister for Commerce and Investment Naveed Qamar. The premier’s arrival coincided with the 75th anniversary of the establishment of diplomatic ties between the two countries.

After defeating his predecessor Imran Khan in a no-confidence vote, Sharif needs international economic and political support to consolidate his coalition government’s standing and stabilize it enough to last through the term ending in August 2023.

Meanwhile, the new government is facing spiraling inflation and a worrying economic crisis inherited from the previous administration. Thus Sharif is seeking investment and trying to grow trade ties with Pakistan’s closest allies.

Having a rich historical background tracing back to the 19th century, relations between Islamabad and Ankara have remained virtually unaffected by changes of government. However, it is worth mentioning that Turkish President Recep Tayyip Erdogan had been on excellent terms with Sharif’s elder brother Nawaz during his stints in power as prime minister.

Sharif held one-on-one talks with the Turkish leader at the presidential complex in Ankara. Afterward, Erdogan tweeted, “On the 75th anniversary of our diplomatic ties, we hosted my beloved brother Shahbaz Sharif, Prime Minister of the Islamic Republic of Pakistan. We are prepared to further develop Turkey-Pakistan relations in light of the two nations’ shared history, friendship, and potential.”

Addressing a joint presser, both leaders affirmed that it was a “very productive meeting” and resolved to upgrade their strategic and economic ties and work together to eliminate terrorism.

Erdogan said, “We have comprehensively discussed our bilateral relations and regional and global issues. We are ready to further strengthen Turkey-Pakistan relations with a strategic perspective in line with the history, friendship and potential of the two countries.”

Discussing Sharif’s visit with Al-Monitor, independent public policy analyst Zubair Faisal Abbasi said that Sharif’s visit “appears to be a multi-pronged diplomatic effort to rekindle cooperation between the two nation states. While rewarming ties between Turkey and Pakistan is a welcome step, it is also necessary to attract investment and avert the financial crisis knocking at the door.”

Here are the highlights of Sharif’s visit to Turkey.

First, making economic ties a top priority, Sharif stressed the importance of increasing bilateral trade volume to $5 billion over the next three years. The Pakistani premier added that the current trade volume of around $1.1 billion per year is “insufficient” given the closeness of bilateral ties.

Addressing a meeting of the Pakistan-Turkey Business Council, Sharif invited Turkish investors to explore more sectors, saying, “Pakistan’s energy sector, with its vast potential in hydro, thermal, coal, wind and solar areas, can prove ideal,” while Pakistan could benefit from Turkish expertise in building and managing dams for water conservation.

A strategic framework agreement has been signed between Islamabad and Ankara to enhance bilateral trade and a joint task force will include officials from the commerce and trade ministries of both the countries.

Noting that the two support each other on issues including the Jammu and Kashmir dispute and the Turkish Republic of Northern Cyprus (although Pakistan does not formally recognize the latter), Sharif said, “This year both countries are celebrating the 75th anniversary of diplomatic relations. In these seven and a half decades, the two sides have always stood by each other in the face of all changes.”

Erdogan expressed support for resolving the Kashmir issue via United Nations resolutions and appreciation for Pakistan’s full support for Turkey’s core interests. He noted, “We have worked together to promote the shared objective of a peaceful and stable Afghanistan.”

Defense and strategic relations also came under discussion, having grown steadily in recent decades. Since some major defense deals in 2018, Turkey has become one of Pakistan’s biggest arms suppliers after China. The warship PNS BADR MILGEM, jointly constructed by the Turkish and Pakistani navies, was commissioned only last month.

Referring to this venture, Erdogan tweeted, “We intend to expand our trade, which has surpassed $1 billion for the first time since 2011, [to] $5 billion. We are pleased with the defense industry cooperation we have developed with Pakistan. We value our collaboration on corvette production as part of the MILGEM Project.”

The Pakistani-Turkish Military Consultative Group (MSG), a high-level military dialogue mechanism, will hold its seventh meeting in Islamabad this year.

Finally, the two discussed the Islamabad-Tehran-Istanbul railway. According to Sharif, this service could be a good opportunity for businesses in both countries to start joint ventures. Linking up Iran and Central Asia with Turkey and Europe, the route could boost regional trade.

Michael Tanchum, a senior fellow at the Austrian Institute for European and Security Policy and a nonresident fellow at the Middle East Institute in Washington, DC, told Al-Monitor, “Turkey has its eye on the larger Eurasian chessboard and it is seeking ways to incorporate Pakistan in the new connectivity. It is forging across Central Asia through the Organization of Turkic States. Pakistan provides the organization’s landlocked Central Asian members critical access to the Indian Ocean.”

Just days before his visit, Sharif had also proposed that the China-Pakistan Economic Corridor be turned into a “trilateral arrangement” to increase regional connectivity. It is not the first time that Islamabad has tried to include Ankara, but this time the offer was made just one day after Chinese Minister Wang Yi’s idea to expand BRICS, a bloc comprising of Brazil, Russia, India, China and South Africa.

Realistically, what will be the immediate outcome of this visit?

According to Abbasi, “The success story of such visits must be taken with a grain of salt. Pakistan needs investment in export-oriented industrialization to ward off twin deficits. It is worth noting that some Pakistani industrialists in the manufacturing sector have shown their unease over the possible preferential trade agreement with Turkey and stressed upon the need of more regional business arrangements.”

However, considering Pakistan’s current economic scenario, Abbasi backed Sharif's efforts to bring in foreign investment, saying, “Nevertheless, it seems important for Pakistan to stay financially afloat on the backdrop of national and international economic turbulence. Such visits do inspire confidence in the business sector to a certain extent.”