No respite for Kurds as Turkey's security forces ramp up repression

Musicians, newlyweds, journalists, and even restaurateurs are not immune to the Turkish government's repression of its Kurdish population. 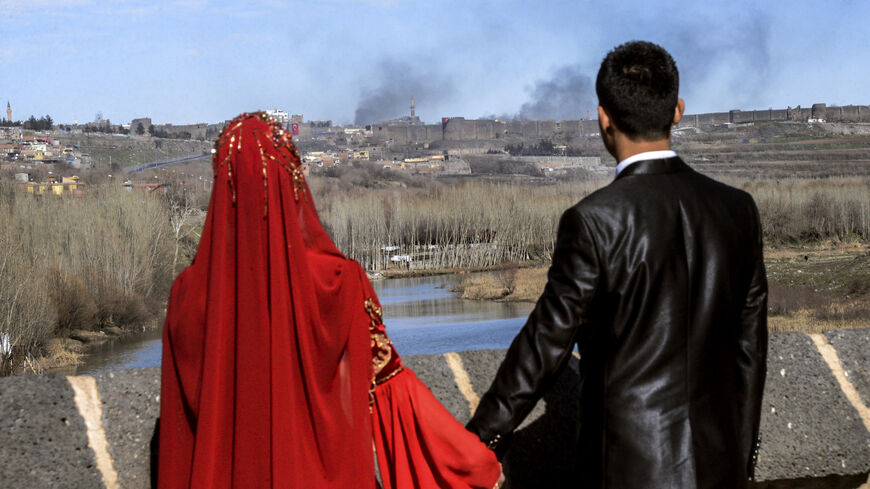 A couple holds hands for a wedding photo as they look at smoke rising over the district of Sur in Diyarbakir on Feb. 3, 2016, after clashes between Kurdish rebels and Turkish forces. - ILYAS AKENGIN/AFP via Getty Images

Dilan Karcik married her teenage sweetheart, Mesut, on June 12. The couple, both ethnic Kurds, celebrated their union with an exuberant bash at a wedding hall in Esenyurt, a working-class suburb of Istanbul. The following day, Mesut and nine guests, including one of his brothers, were hauled in by police for questioning and arrested on charges of terrorist propaganda.

Mesut’s alleged crime was draping a red, yellow and green shawl over his shoulders and chanting "forbidden" slogans along with guests as they joined in a circle dance, as is typical for Kurdish revelers.

Police claimed the “rag” — as the shawl was described in their report — was a “PKK flag.” They were referring to the Kurdistan Workers Party (PKK), which is waging an armed campaign for Kurdish autonomy against the Turkish state. Their flag is red, green and yellow. The guests did chant pro-PKK slogans, the defendant's lawyer said.

A day after the arrests, the musicians who played at their event were interrogated for performing “separatist songs” and then set free.

“I don’t know what to say. I am still in shock,” Dilan, who had just visited her husband at Istanbul’s Silivri prison, told Al-Monitor. “If we cannot sing in our own language, even on our most special day, what is the point of our existence?” she asked. “I have no idea what will happen now; we are all devastated,” she said — none more so than her mother-in-law who now has three sons in jail. Another was imprisoned last year for political activities.

The Karciks' story would have been regarded so mild as to be unworthy of recording in the 1990s when the Turkish state’s scorched earth campaign against the PKK in the country’s predominantly Kurdish southeast region saw thousands of villages reduced to ashes and over a million Kurds forced to flee their homes. Many sought refuge — as did the Karciks, natives of Van province on the Iranian border — in Istanbul and other large cities where they face persistent violence and discrimination.

Thousands of Kurds — rights groups say as many as 3,000 — were killed in extrajudicial executions or forcibly disappeared. Many more were brutally tortured and jailed for alleged collusion with the rebels.

The repression scaled absurd heights, such as when restaurateurs were charged with sedition over saltshakers in the shape of a mustachioed man that prosecutors said was a likeness of imprisoned PKK leader Abdullah Ocalan.

Turkey’s ruling Justice and Development Party (AKP) shot to power in 2002 promising to reverse decades of military tutelage and carry the country into the European Union through a blizzard of democratic reforms. They included easing restrictions on the Kurdish language and launching face-to-face peace talks with Ocalan and the PKK. A growing number of Kurds, pious conservatives in particular, began voting for Erdogan in droves, placing his AKP in direct competition with the country’s largest pro-Kurdish Democratic Peoples’ Party (HDP).

Hopes of lasting peace crumbled together with a two-and-a-half-year-long cease-fire in 2015 when Turkey’s president, Recep Tayyip Erdogan, ditched the talks for several reasons, notably the HDP’s refusal to back his plans to amass power in his own hands through constitutional changes.

The security state mindset is back with a vengeance, with the failed 2016 coup to violently overthrow Erdogan serving as cover for a new wave of repression that targets dissidents of all stripes. However, the government’s wrath is largely reserved for followers of Fethullah Gulen, the Pennsylvania-based Sunni preacher accused of masterminding the putsch, and above all for Kurds deemed to be sympathetic to Ocalan.

“The people cannot breathe. They are consumed by fury [at the government],” said HDP lawmaker Hishyar Ozsoy in a recent interview.

“I am representing so many political detainees that I have lost count,” said Huseyin Yildirim, who is acting on behalf of the Karciks and their friends. Yildirim told Al-Monitor that an indictment is being prepared against them but that the case is “utterly baseless.” Their imprisonment is unlawful because the charges brought against them are limited to spreading propaganda on behalf of a terrorist organization, an offense that does not require their detention under existing laws.

The “real scandal,” Yildirim added, is that police disguised as guests had spied on the wedding and filmed the event and are now using the footage as evidence against them. “Unless the attendees were under legal investigation, the police had no right to do this; the case was manufactured from finish to start,” he said. The videos were leaked to the pro-government media, which duly splashed the story with sensationalist headlines.

The most likely reason the family was targeted was that they are hailed in Kurdish circles for their activism. Various members are in jail while a few wound up fighting within the PKK’s ranks.

The groom and the bride, however, ran a souvenir shop. “We were planning to spend our honeymoon in Fethiye; we had booked our hotel,” Dilan said. “Of course, we aren’t alone. There are thousands in our situation and far worse,” she added. “But I have been to many weddings that were like ours. And nothing happened.” Esenyurt is run by the main opposition Republican People’s Party.

Thousands of HDP activists and numerous former lawmakers — including Selahattin Demirtas, the country’s most popular Kurdish politician — remain behind bars on scantily evidenced terror charges. As of 2017, more than 80 Kurdish-run municipalities had been seized by the state for purportedly acting in concert with the PKK and placed under the rule of unelected government trustees.

A case to ban the HDP was filed in March 2021 on similar grounds. The likelihood of its closure is growing as nationwide parliamentary and presidential elections that have to be held by June 18, 2023, draw nearer. Kurds hold the swing vote that can tilt the outcome in favor of the opposition, as seen in the 2019 Istanbul mayoral election redo. If the HDP is disqualified, the government reckons many might stay at home, giving the AKP an edge.

Either way, criminalizing the party and its members makes it harder for them to campaign, be it for themselves or fellow opposition groups.

“Although the Kurds had nothing to do with the military putsch, they bore the brunt of the deterioration of political conditions,” noted Mehmet Kurt, a Kurdish academic and Marie Sklodowska-Curie Global Fellow at the London School of Economics, in a recent essay exploring institutional racism against the Kurds.

“I have also had countless stop-and-frisk encounters and experienced discrimination all my life in Turkish spaces. I have watched the facial expressions of Turks change when I told them where I was from. 'It is ok; they (Kurds) are also human' is a response that I, along with millions of Kurds, am used to hearing,” Kurt wrote.

“The security forces have always been a backbone of nationalist, militarist and discriminatory practices against the Kurds, as was evident in the 1990s and more recently during the urban conflict with the PKK in 2015 and 2016,” when Turkish security forces committed what the UN has called war crimes against Kurdish civilians, Kurt told Al-Monitor.

“For many of them, all Kurds are ordinary suspects regardless if they are involved in any sort of activism or not,” he said. “The process of investigation and detainment itself is performed as a sort of persecution, and the point is never about 'a suspect' but giving a clear message to others as to the consequences they would likely face.”

That point was driven ruthlessly home in a June 20 raid on the home of an alleged PKK member identified solely by his initials, M.E.A., in a remote hamlet called Onikidere, or Sersul (in Kurdish), bordering Iran. Footage of dozens of members of the security forces firing shots in the air as they descended on his house caused an uproar on social media. A fact-finding mission led by Turkey’s Human Rights Association corroborated locals’ claims that security forces had used unprovoked force against the suspect and his wife, who lost consciousness after being kicked in the shins. His 7-year-old daughter was shoved to the ground as she tried to shield him.

The Human Rights Association found 400 empty bullet casings at the scene. The governorate of Van denied all claims in a statement saying that members of the security forces had fired in the air after being pelted by locals with rocks.

Turkish soldiers fire randomly into the air and beat up Kurdish villagers. In rural Kurdish regions, this is the most common interaction with the government people have—not representative government and quality public services but assimilation & violence. pic.twitter.com/L6tyRvVIRj

The display of impunity mirrors an incident in Van in September 2020 when security forces whisked a pair of farmers away in a helicopter and beat them to a pulp on the grounds that they were aiding the PKK. One of the farmers died. The other has yet to recover from his injuries.

Four local journalists who reported the story were arrested and tried on charges of PKK membership. All were acquitted. But pressure on their news organizations, Mezopotamya and the all-female Jin new agency, continues. Sixteen journalists were imprisoned pending trial earlier this month on charges of spreading terrorist propaganda in Diyarbakir, the largest Kurdish majority city in the southeast. Two of the reporters are from Mezopotamya, and another is from Jin.

A reporter for Mezopotamya who spoke on condition that they be identified as Zeki said one of the likely reasons for the arrests was to prevent journalists from revealing stories the government wants suppressed, particularly in the run-up to the elections and ahead of another military assault against the Syrian Kurds that Erdogan is vowing to sanction.

“Pressure on the independent media is at its highest level in 30 years,” Zeki told Al-Monitor. “In the old days, they used to stop us through killings. Now they are using the threat of prosecution and imprisonment, leading many of our colleagues to quit the country,” he added. “They are wielding the justice system against us like a club.”