Despite the agreement to disband the Knesset tonight, the opposition has blocked widely supported legislation. 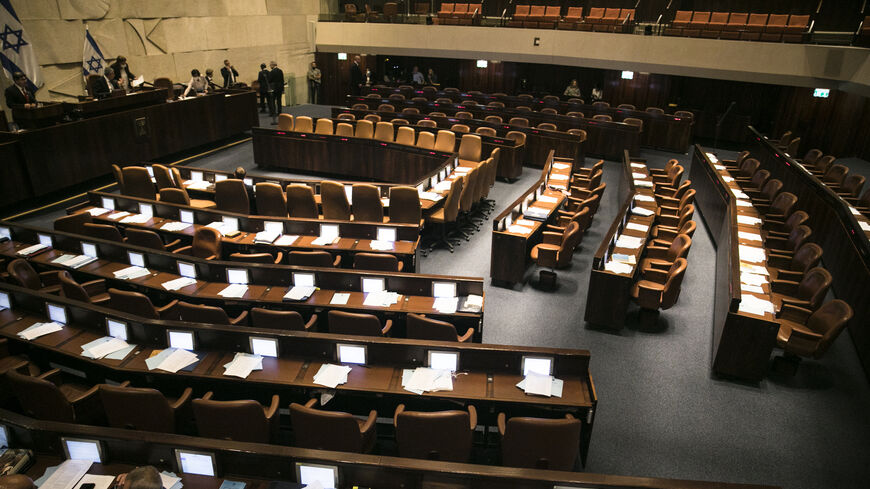 A view of the Israeli Knesset general assembly is seen ahead of an expected vote to dissolve parliament on June 27, 2022, in Jerusalem, Israel. - Amir Levy/Getty Images

Sometime this evening, the Knesset will vote to dissolve itself and hold a new election. As a result, the coalition and its member parties have launched a blitz of legislation, hoping to pass as much of it as possible in the little time the government has left.

There are, however, several laws the opposition parties are refusing to discuss. One of them is the metro law, which was intended to provide a budget for the construction of a subway in the Tel Aviv metropolitan area in the next decade. The Metro project involves the construction of 109 stations in 24 local councils for an estimated population of 2 million. It is one of the largest infrastructure project ever undertaken in Israel.

Also included in these laws are the long-awaited US visa law that would lead to waiving the visa requirement for Israelis visiting the United States.

Senior members of the coalition led by Prime Minister Naftali Bennett himself have pleaded with members of the opposition to allow them to pass these bills. Bennett tweeted, “Don’t bring down the metro law. Don’t prevent Israel from having such a vital metro system. Israel is a modern country, but it lacks a subway system like they have in New York, Paris or London. That is why we are forced to suffer through endless traffic jams.”

It was a call to members of the opposition to stop blocking a major project in the national interest. Israelis face nightmarish traffic jams every morning on their way to work.

Finance Minister Avigdor Liberman echoed the prime minister’s call to allow the project to move ahead: “We must not allow the billions of shekels already invested in the Metro project to go to waste, all for political consideration. Failure to pass this bill will deliver a mortal blow to the people of Israel and the country’s development.”

Transportation Minister Merav Michaeli said in response to the decision not to move forward with the bill, “If the metro law isn’t passed because some members of the coalition surrendered to the opposition at the expense of the people, they will need to be held to account. They will be stopping a project in the national interest to extricate us from traffic, all because of petty politics.”

Interior Minister Ayelet Shaked appealed to Knesset members from the Likud in a video, saying, “The Knesset will be dissolved tomorrow. I find it very, very sad. We should never have had a fifth election so soon.” She continued, “I call on the Likud to lift its veto on legislation that is necessary to exempt us from the need for visas when visiting the United States. We are on a very expedited path in our dealings with the US government so that by the start of the new year, Israelis will no longer have to line up at the US Embassy to obtain a visa. I therefore call on the Likud: Let us pass this legislation.”

US Ambassador to Israel Tom Nides took to Twitter to appeal publicly to the opposition, writing in an unheard-of request, "I've been working around the clock since I arrived to help Israel meet all the requirements to join the #VisaWaiverProgram. Don't lose momentum now. This will help Israeli citizens travel to the US - put them first!”

Shaked took advantage of the ambassador’s tweet to goad the opposition, saying, “Maybe it needs to be said in English for the members of the opposition to better understand how important this bill is to the people of Israel.”

Thus, with Israel about two hold its fifth election in less than three and a half years, legislation that should have the support of all member of Knesset is now in peril. The opposition is vetoing even raising these bills before the plenum now, hours before the Knesset is dissolved, just to prevent the coalition from scoring any achievements on the eve of an election.

While by nature the opposition is on a mission to topple the government, that mission has already been achieved. The opposition and coalition have agreed to disperse the Knesset tonight.

Knesset member Keren Barak of the Likud said in an interview with Israeli Radio 103FM, “We told the coalition to pick 50 bills. This can remove other bills from their list and swap these in instead. They set their priorities, and then there are negotiations. We told them to bring 50 bills that we all agree on and pick the ones you want to raise. If you want to pass the metro law so badly, remove one of the other bills. You can’t have both. We can’t pass 150 bills.”

Even people opposed to the coalition refuse to accept her reasoning. For instance, Ofir Saloniki, an ardent supporter of opposition leader Benjamin Netanyahu, told Al-Monitor, “As a matter of principle, the opposition should not be helping the coalition, but in the current situation, especially with the Knesset about to dissolve itself, the opposition should have acted differently. The metro law was intended to help rescue the entire country from the insufferable traffic jams.”