Israeli and American representatives have signed an information-sharing agreement needed for Israel to join the US Visa Waiver program, but the hurdle of Knesset approval remains. 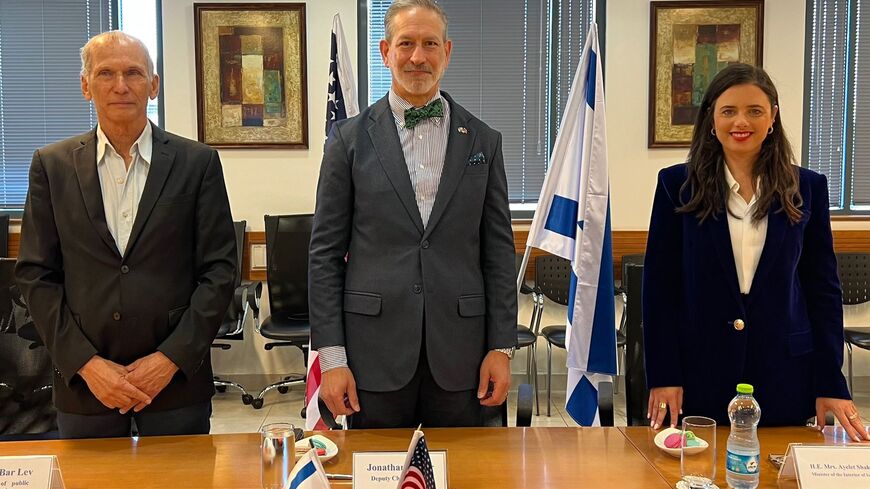 Israeli and American representatives inked an information-sharing deal this morning. Public Security Minister Omer Bar Lev and US Deputy Ambassador to Israel Jonathan Shrier signed the agreement with Interior Minister Ayelet Shaked witnessing. The agreement will enable the two countries check fingerprints from each other's databases up to 1,000 times a year as well as request information on citizens with severe criminal backgrounds.

A preliminary agreement to that effect was signed March 3 by Bar Lev and the US Department of Homeland Security's visiting undersecretary for policy, Robert Silvers.

Granting US authorities access to criminal records is a condition for any country seeking to join the waiver program. Israel has been trying for years to meet the requirements, as the United States is a top tourism and business destination of Israeli citizens. This package of two agreements facilitates Israel joining, but the Knesset still needs to adopt further legislation before the country can join the program.

Israeli efforts got a boost last year, when President Joe Biden met in Washington with then-Prime Minister Naftali Bennett. In the readout of their August 2021 meeting, “President Biden also emphasized that his administration would strengthen bilateral cooperation with Israel in ways that would benefit both US citizens and Israeli citizens, including by working together towards Israel’s inclusion in the Visa Waiver Program. The leaders directed their teams to enhance consultations as Israel works on addressing the program’s requirements.”

The issue has been one of Shaked’s top priorities since taking office.

In an interview with Israeli journalists last February shortly after taking office, US Ambassador to Israel Thomas Nides said that his third priority (after the replenishment of the Iron Dome and keeping the vision of a two-state solution alive) would be the visa waiver, because it would strengthen Israel.

“There’s nothing more frustrating than when you want to go somewhere, and you can’t get a visa. That’s one of the reasons I’m focusing on this visa waiver program. I was the number two at the State Department. I’m well aware of how emotional this is, and I care deeply. I want Israelis to come to the United States, and I want them to be able to come as often as they can and as often as they want.”

Nides added, “I talk to Minister Shaked almost every other day on this topic. And as you know, it’s complicated, but I am putting the full energy of this embassy behind it. There are things that the Israelis must do as well. And we’re working together as a team, and hopefully we’ll get this done this year. I’m super confident that we can get it there.”

With the signing of the two agreements, the ball is now in Israel’s court. The government tried to bring the relevant legislation to a vote quickly before the Knesset was about to dispersed, but failed to get it adopted. The opposition refused to support it as well as legislation concerning the Tel Aviv metro program.

Efforts to get the legislation adopted before the disbanding of the Knesset included a rare public appeal by the American ambassador. On June 28, as representatives of the coalition and the opposition negotiated the bills that would be quickly approved, Nides implored Israeli lawmakers to support legislation that is critical for Israel to be able to join the visa waiver program. “I’ve been working around the clock since I arrived to help Israel meet all the requirements to join the Visa Waiver Program. Don’t lose momentum now. This will help Israeli citizens travel to the US — put them first!” tweeted Nides.

Also on June 28, Shaked called on the Likud to “remove its veto on the law we need to get a waiver from visas to the US. We are on a very accelerated path with the US government that at the start of next year will lead to Israelis not having to stand in line at the US Embassy” to apply for a visa, Shaked said. “I call on the Likud to let us pass the legislation.”

Today, after the signing of the agreement, Shaked said, "That's it, all the agreements have been signed, now we just need to pass it in the Knesset. Even though the Likud is trying to delay the exemption for visas for Israelis that is in the most advanced stage it's ever been in, we are continuing to run with it," adding, "I am committing to continuing to advance this important task and intend on demanding that we keep working on it even after the elections in order to give Israel's citizens the good news they've been waiting for."