US President Joe Biden's visit to the region occurs as Israel escalates military policies in the West Bank and unveils new settlement plans. 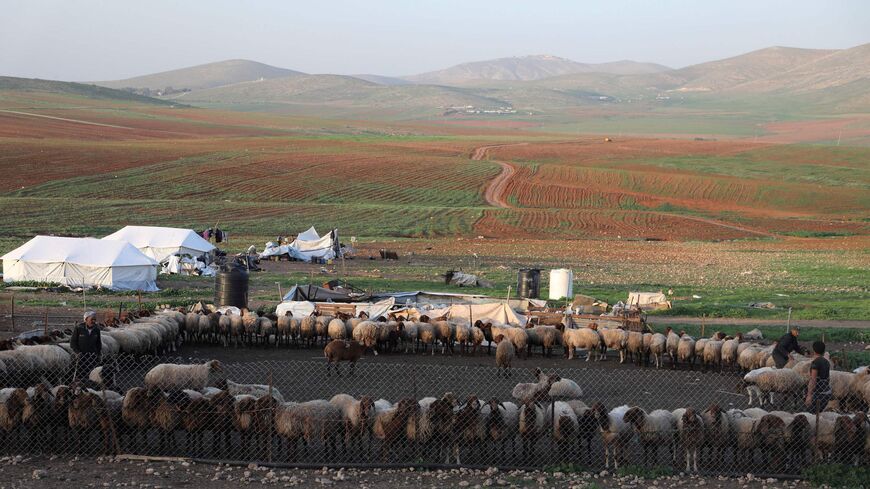 Bedouins' sheep and structures are pictured in the village of Humsah al-Baqia in the Israeli-occupied West Bank on Feb. 14, 2021. Humsah al-Baqia lies in the Jordan Valley, a fertile and strategic patch of land that runs from Lake Tiberias to the Dead Sea, which also is at the center of the battle for the future the West Bank. - JAAFAR ASHTIYEH/AFP via Getty Images

US President Joe Biden and outgoing Israeli Prime Minister Nafali Bennett had hoped for ‘calm’ ahead of Biden’s visit, but Israeli settlement plans may make that unrealistic. Reports of a new massive settlement project in the West Bank are proving controversial among Palestinians.

Israel Hayom newspaper revealed June 13 a settlement plan to build a national park covering around 1 million dunams (a dunam equals 1,000 square meters) between Jerusalem and the Dead Sea in the West Bank.

Although the Israeli government did not comment on the project, nor did it set a date to present the plan to competent authorities for approval, parts of the plan are already being implemented.

As per the plan, which would separate the northern West Bank from its south, nearly half of the land overlooking the Dead Sea would be seized. Mobile restaurants would be established in the park, in addition to a hotel at the northern end of the Dead Sea and a joint information and reservation center.

The area in question is located on the open land between the north and south of the West Bank, which means that implementation of the plan would be the final nail in the coffin of establishing a Palestinian state that is geographically contiguous.

The plan also largely supports settlement construction in the E1 area near the settlement of Ma’ale Adumim, as Israel Hayom quoted director of the Judea and Samaria Cluster Keren Geffen as saying that they seek to create a new, unprecedented national park in Judea and Samaria (the West Bank) and establish a single network.

The unveiling of the new plan came a day before the White House announced the program of US President Joe Biden's visit to the Middle East, which extends from July 13-16 and includes stops in Israel, the Palestinian territories and Saudi Arabia.

Khalil al-Tafkaji, director of maps at the Jerusalem-based Arab Studies Society, told Al-Monitor, “This project helps Israel fully put its hands on the area extending from the Ramallah wilderness to the Jordan Valley, passing through Arab al-Rashayida and the wilderness of Ta’amra and Al-Sawahirah, which is a vast mountainous area overlooking the Jordan Valley, up to the Jordan River and the Dead Sea.”

Tafkaji explained that “this project achieves several goals for Israel, mainly the ethnic cleansing of the Bedouins and their expulsion from these areas under the pretext of establishing a national park. Israel would make a huge leap toward implementing the Jerusalem 2050 project (also known as Jerusalem 5800), especially in the Nabi Musa area, where it plans to establish the largest airport in the Middle East to receive 35 million passengers.”

Tafkaji pointed out that this area is full of tourist, historical and religious sites, such as the shrine of Nabi Musa, the Baptismal site, Qarn Sartaba (Alexandreion) and the Herodion mountainous area, which will come under absolute Israeli control. Agricultural investments in that area would also be promoted since Israel was able to dig water wells and establish an infrastructure of networks for use in previous settlement expansion, he added.

Regarding the political repercussions of this plan, Tafkaji said, “The target area is a longitudinal area that extends from the northeast of the Jordan Valley to the southeast, and there are settlements that Israel is working to expand.”

He noted that the core of Israeli politics is to control the land through several means and tools, including the declaration of nature reserves and the establishment of national parks. He noted that this project aims to isolate the central region (Jerusalem) completely from the West Bank, thus cutting off communication between the north of the West Bank and its south, which means the impossibility of establishing a geographically contiguous Palestinian state.

Suhail Khaliliah, director of the Settlement Monitoring Unit at the Applied Research Institute, told Al-Monitor that part of the area referred to in the plan is classified by Israel as “state land,” and another part is made of closed military zones or nature reserves, according to Israeli decisions that are almost expired. Therefore, the settler umbrella group Yesha Council is working in coordination with the Civil Administration affiliated with the Israeli army to impose control over larger areas and declare them a national reserve to ensure open-ended control over them for years, without the need to renew the decisions, he added.

Khaliliah pointed out that talk about this plan should sound the alarm among Palestinians because the annexation and control of this area, which reaches the Dead Sea, will turn it into a geographical barrier separating the north of the West Bank from its south, and thus will have repercussions on any future arrangement. He pointed out that this area might come under the jurisdiction of the Ma'ale Adumim settlement and then officially come under the control and jurisdiction of the Israeli Jerusalem municipality.

The US administration fears that Israel will announce new settlement projects in Jerusalem and the West Bank or launch a military escalation, specifically in the city of Jenin, prior to Biden’s visit. Haaretz newspaper reported on June 15 that the US envoy who is preparing for the visit asked the Israeli political leadership to refrain from steps that might increase tension with Palestinians ahead of Biden’s trip to the region.

The envoy has reportedly asked Israel to stop the demolition of the houses of wanted Palestinians and prevent the Israeli army from entering Area A in the West Bank, which is under the control of the Palestinian Authority. But Israeli officials did not promise to comply with the request, according to the paper.

Other Israeli reports also claimed that the American side has explicitly asked Israel to postpone its discussion of objections to the construction project in the E1 area near the settlement of Ma'aleh Adumim, which was scheduled for July 18, two days after Biden's visit, especially since the Americans oppose this plan.

But the US demands, whether regarding Israel’s settlement projects or military operations, might fall on deaf ears in light of the ongoing military operations in the West Bank, the last of which claimed the lives of three Palestinians belonging to the armed wing of the Islamic Jihad in the Jenin camp in the northern West Bank on June 17. The next day, June 18, the Israeli army launched airstrikes against military sites inside the Gaza Strip for the first time in months after Palestinian militants brought down a sophisticated spying and surveillance system (an air balloon) on the border with Gaza.

While Palestinian factions threatened to respond to the June 17 killing in Jenin, Israeli reports claim that the Israeli army has taken a decision to dismantle and eliminate the Jenin Brigade of Al-Quds Brigades, the military wing of Islamic Jihad, even if this leads to military tension with the Gaza Strip.