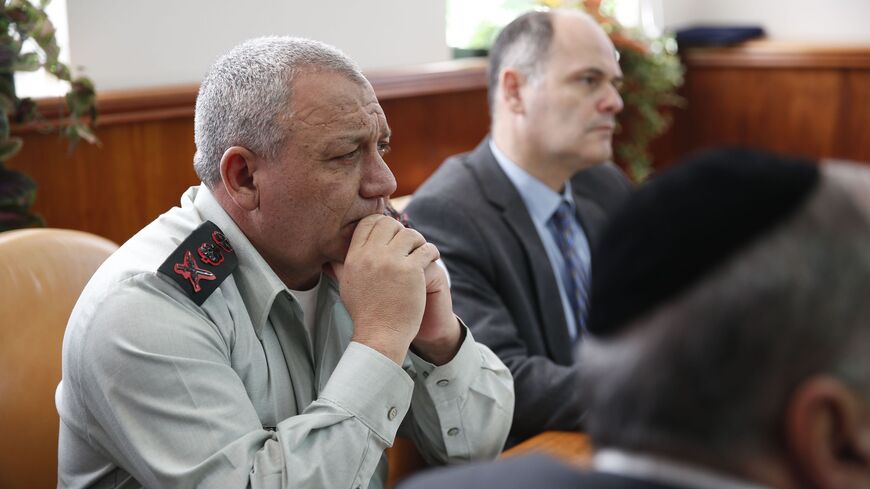 In Israel, one of the clearest indications that an election is right around the corner is a top general announcing a plan to enter politics. It may be folk wisdom, but it is almost always true. Many among the country’s top brass, particularly chiefs of staff and their immediate subordinates, pursue political careers after their service. In a country with a long history of war and existential threats, a celebrated military career is the ideal gateway to politics.

That is why it came as no surprise that another former chief of staff, Lt. Gen. Gadi Eizenkot, announced last week that he was about to enter politics. Eizenkot may have been waiting on the sidelines for the right time and circumstances to throw his beret in the ring.

After last week, it seems highly likely that the country will hold another election as early as autumn.

The Knesset's June 13 session bore hallmarks of the government’s swan song. Members of the coalition didn’t even bother to show up to vote after all their proposed pieces of legislation were withdrawn.

The trigger was a statement by Knesset member Nir Orbach of Yamina that he is preparing to leave the coalition and will not be voting with it unless it gets a majority to approve the West Bank regulations bill concerning Israeli criminal law over West Bank settlements. Despite Prime Minister Naftali Bennett being the leader of Orbach’s own party, Orbach gave him a week to get it done. The ultimatum suggests elections could happen sooner than later.

Eizenkot served as chief of staff between 2015 and 2018 under former Prime Minister Benjamin Netanyahu. Although he was eligible to run in the last two Knesset elections, he preferred to wait. It was only last April that he was eligible to serve as a minister, according to the legally mandated cooling-off period after military service.

He is a popular figure and many parties would be happy to have him. Ever since he left the military in 2019, the leaders of several parties have held talks with Eizenkot. One of the most prominent was the leader of Yesh Atid, Yair Lapid. But before the last election, Eizenkot also held talks with the head of the New Hope party, Gideon Sa’ar. Reportedly, at the time, Sa’ar called Eizenkot an impressive individual with impressive skills, adding that he would be happy to have him on his side.

Eizenkot turned all the parties down. Nevertheless, many of those who spoke with him walked away feeling that he does want to influence the way the country is headed and believes he can best do that through politics. He is just waiting for the most opportune moment.

Eizenkot now seems to be signaling that his time has arrived. Another obvious advantage is that he is a Mizrahi Jew whose family immigrated to Israel from Morocco. The Mizrahi public is traditionally and historically identified with the Likud. Many Mizrahi Israelis regard the Likud as their political home after years of the left, and especially the Labor Party, patronizing them.

The two political blocs continue to be trapped in a stalemate. The center-left believes that a popular figure like Eizenkot would successfully draw a seat or two away from the Likud, thereby tilting the balance of power in its favor.

Reports indicate that Eizenkot is leaning toward joining Lapid’s Yesh Atid. It is a centrist party leaning left, which apparently reflects Eizenkot’s own political positions. Should he agree to join Lapid, Eizenkot would take the number-two spot on the list and be Lapid’s candidate for defense minister. It would be a significant boost for Lapid, since his lack of experience in security matters is generally considered his weak spot.

Al-Monitor has learned that Eizenkot is indeed interested in joining a party, and has been eying Yesh Atid. His associates say he could condition his membership on joining not as an individual, but as the head of a new political movement. That way, he would be able to maintain his independence within Yesh Atid.

Eizenkot can boast of a series of impressive military achievements during his tenure as chief of staff under Netanyahu. Chief among them was his “War between Wars” doctrine, particularly in Syria, through which Israel’s air force attacked arms shipments from Iran. He also oversaw Operation Northern Shield in December 2018, in which six Hezbollah tunnels from Lebanon into Israel were destroyed.

In March 2016, Eizenkot took a contrary approach to Netanyahu in response to the Elor Azaria incident. Azaria shot a wounded Palestinian terrorist in the head during an incident in Hebron, claiming he acted in self-defense. He was charged with manslaughter and spent time in prison. Though the right treated Azaria as a hero, Eizenkot disavowed what he did on more than one occasion. In contrast, Netanyahu adopted the right's rhetoric and even spoke with Azaria’s father. The right branded Eizenkot a leftist as a result, so even if he'd wanted to join the Likud, the incident would have haunted him.

In a January interview with Maariv with Ben Caspit, Eizenkot implied criticism of the way Netanyahu handled the Azaria incident and his policies toward the Palestinians. He was also critical of the pressure Netanyahu placed on the Trump administration that led to its withdrawal from the nuclear agreement with Iran. Eizenkot called that decision a “strategic error.”

When asked about the possibility of entering politics, he said that he has been approached by several parties and that some made very tempting offers “to place him in the number-one or number-two spot on their lists.” When asked what party he is most likely to join, Eizenkot responded, “To whoever believes that Israel must be a Jewish, democratic, progressive and tolerant state, a strong, practical state striving to integrate into the region while improving the lot of Israeli society. All the main Zionist parties are there.”

Eizenkot also speaks frequently after the dangers posed by the deepening rift in Israeli society. He believes that it poses no less of a threat to the country than Iran.

If he does run in the next election, he will join a long line of chiefs of staff and other top generals who turned to politics in an effort to influence the country. Two of them, Yitzhak Rabin and Ehud Barak, ended up serving as prime minister, too, as did another leading general, Ariel Sharon.