The "unsafe and unprofessional" encounter was at least the second in just a few months, a Navy official confirmed. 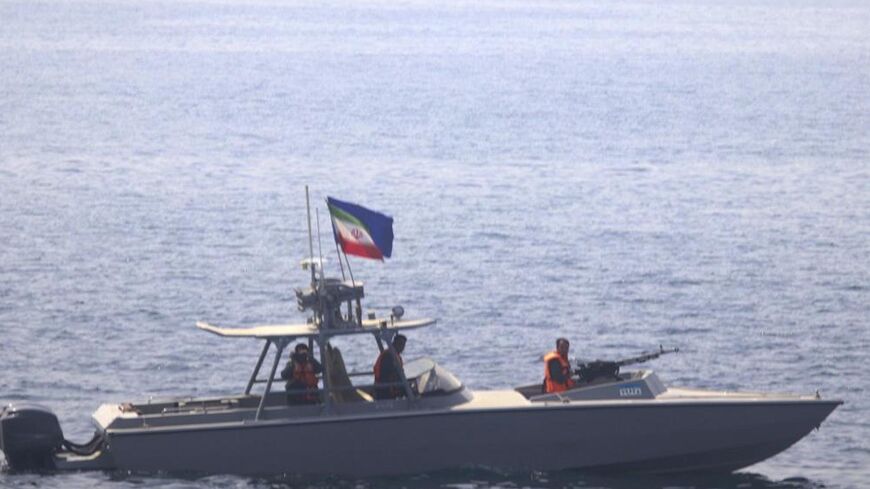 In this photo made available by the US Navy, a boat of Iran's Islamic Revolutionary Guard Corps Navy operates in close proximity to patrol coastal ship USS Sirocco (PC 6) and expeditionary fast transport USNS Choctaw County (T-EPF 2) in the Strait of Hormuz, Monday, June 20, 2022. - US Navy

The crew of a fast boat belonging to Iran’s Islamic Revolutionary Guard Corps (IRGC) weaved headlong into the path of a US Navy ship in the Persian Gulf on June 20, in the latest tense encounter between the two adversaries in Middle Eastern waters.

The IRGC boat approached the USS Sirocco “head-on at a dangerously high speed,” coming within 50 yards (46 meters) of the American ship before altering course after the Sirocco’s crew blew the ship’s horn, the US Navy’s Fifth Fleet said in a statement.

The hourlong encounter, which involved two other IRGC boats, occurred as the US patrol ship and an accompanying US Navy transport vessel, the USNS Choctaw County, passed through the Strait of Hormuz.

Iran's government did not immediately respond to the US Navy’s account of the incident. The United States’ Bahrain-based Fifth Fleet released video purporting to show part of the incident, which can be seen here.

Why it matters: The dustup is at least the second of its kind in just a few months. In early March, three IRGC vessels closed in on a pair of US Navy and Coast Guard ships exiting the Strait, a US military official confirmed to Al-Monitor.

During that incident, which lasted two hours and was first reported by The Associated Press, an IRGC catamaran came within 25 yards (23 meters) of the US Coast Guard cutter Robert Goldman.

Such encounters were rarely reported over the past several years and appeared to have restarted as the Biden administration sought to return to the 2015 nuclear agreement with Iran shortly after taking office while maintaining sanctions imposed during the Trump administration.

The latest run-in in the Gulf comes as Tehran increases pressure in other areas as the Vienna negotiations over a return to the deal appear to be faltering.

The Trump administration unilaterally withdrew from the nuclear agreement in 2018 and imposed a slew of economic sanctions on Iran, which in turn led the country’s leaders to publicly violate tenets of the deal, including enriching uranium well beyond proscribed levels.

Iran is now poised to begin using advanced centrifuges at its Ferdow facility in further violation of the JCPOA, Reuters reported yesterday, citing an internal report by the UN’s nuclear watchdog agency. US officials say they see a return to the accord as increasingly less likely, though both sides say they have put forth proposals to bridge the impasse.

What’s next: The Fifth Fleet has increasingly partnered with Middle Eastern navies in recent years to interdict smuggling that benefits the IRGC and its proxy militias and is now turning to unmanned vessels to plug the gaps in patrol coverage of the region’s sea lanes.

The scope of that cooperation is expected to continue to grow as President Joe Biden visits the Middle East July 13-16, a senior US official told reporters recently.