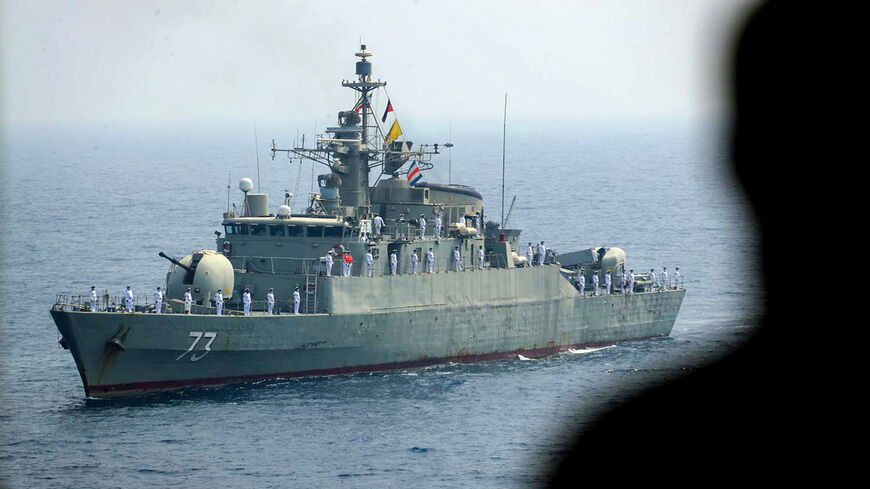 A handout photo provided by the Iranian army official website shows an Iranian naval ship parading during the last day of a military exercise in the Gulf, near the strategic Strait of Hormuz, southern Iran, Sept. 12, 2020. - -/Iranian Army office/AFP via Getty Images

The crew of a US Coast Guard cutter fired multiple bursts of warning shots as two Islamic Revolutionary Guard Corps (IRGC) fast-attack boats came too close to a formation of US Navy ships transiting the Strait of Hormuz on Monday.

Thirteen IRGC boats approached the group of six US vessels as they escorted the surfaced USS Georgia submarine through the strait, according to the US Navy.

With deck guns uncovered and manned, two of the IRGC fast boats broke away from the Iranian formation and rapidly approached to within 150 yards of the USCGC Maui, the US’ Fifth Fleet said in a statement.

The two fast boats continued to approach despite multiple audio warnings, radio warnings and a burst of warning shots, the US Navy reported. They turned back after additional warnings were sounded. In all, some 30 shots were fired from a .50 caliber machine gun onboard Maui, Pentagon Press Secretary John Kirby said Monday.

The run-in, which US Central Command classified as “unsafe and unprofessional,” is the third of its kind in just over a month between the IRGC and American warships in the Persian Gulf.

Once common in the region’s waterways, the naval standoffs between the two adversaries kicked off again early last month after a yearlong lull.

A US Navy patrol ship fired warning shots April 28 after IRGC fast boats came within 70 meters (230 feet) in the northern part of the Gulf. On April 2, three IRGC boats and a twin-hulled Harth-55 support vessel harassed two US Coast Guard ships for up to three hours in the Gulf’s south.

The return of IRGC harassment in the Gulf comes as the US administration of President Joe Biden engages in indirect talks with Iranian officials in Vienna over a return to the 2015 nuclear deal.

Washington is seeking to pivot away from engagements in the Middle East to focus on strategic competition with Russia and China.

The Biden administration has communicated its concern over the recent incidents to Iranian officials, but the military remains reticent to point the finger at political leadership in Tehran.

“The activities we typically see from the IRGC Navy are not necessary activities that are directed by the supreme leader or from the Iranian state, rather irresponsible actions by local commanders on scene,” the commander of US forces in the Middle East, Gen. Kenneth “Frank” McKenzie said last month.

“That’s a whole different reporting chain up to the elected government, and the IRGC doesn’t report along those same lines,” Kirby said.

Biden administration officials have also been circumspect about blaming Iran for continued rocket and missile attacks by IRGC-backed fighters in Iraq and Yemen, although McKenzie has publicly said that the weapons used in such strikes have typically been supplied by Tehran.

A US Navy ship seized a massive cache of anti-tank rockets, machine guns and small arms in the Arabian Sea last week, the latest interdiction of arms likely bound for Yemen’s civil war. An investigation has yet to determine the shipment’s origin and destination, the Navy said.

The Biden administration’s cautious messaging, though backed by a show of military force, stands in stark contrast to that of the previous administration’s maximum pressure campaign against Tehran.

The administration of former President Donald Trump enacted an array of economic sanctions against the IRGC and Iran’s leaders after unilaterally abandoning of the nuclear accord in 2018.

That policy failed to curtail Tehran’s ambitions in the region, the US intelligence community reported in an unclassified annual assessment last month.