Iran has accused the US Navy of “false narratives” and “unprofessional behavior” in the latest run-in with the Islamic Revolutionary Guard Corps. 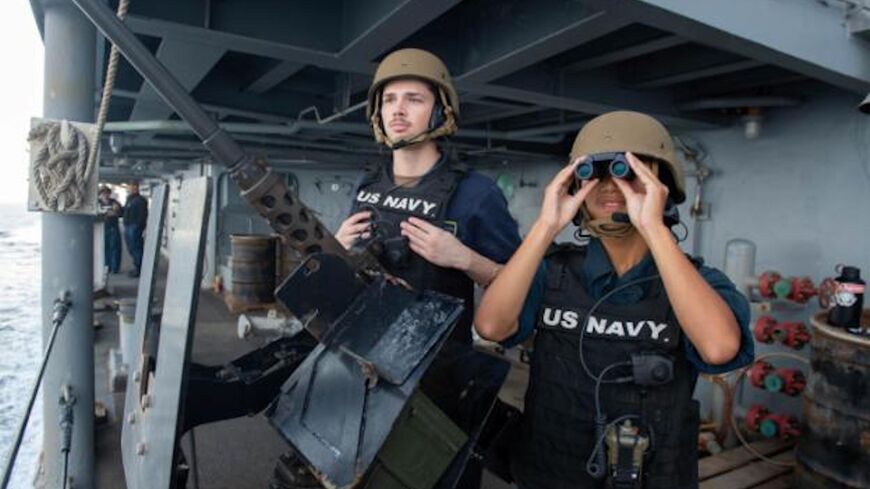 In this handout photo provided by the US Navy, Master-At-Arms Seaman Khang Ho, right, and Seaman Shane Mitchell search for surface contacts during a Strait of Hormuz transit aboard the guided-missile cruiser USS Leyte Gulf on Nov. 19 , 2019. - Zachary Pearson/US Navy via Getty Images

Iran’s Islamic Revolutionary Guard Corps has rejected the Pentagon’s account of a tense encounter with the US Navy near the Strait of Hormuz this week.

On Tuesday, the IRGC Navy called Pentagon press secretary John Kirby’s statement about the incident on Monday “false,” blaming the United States’ “illegitimate presence” in the Gulf for the tensions, according to IRGC-run Sepah News.

The statement accused the US Navy of making “false narratives” and “unprofessional behavior” in the strait.

A US Coast Guard cutter fired some 30 warning shots to ward off two IRGC fast-attack boats that came too close to the US formation in international waters, the Fifth Fleet said yesterday.

Thirteen IRGC fast-attack boats rapidly approached the formation of seven US Navy and Coast Guard ships before two of the boats broke away to approach the USCGS Maui and USS Squall, who were escorting the guided-missile submarine USS Georgia through the Strait of Hormuz.

The run-in was the third of its kind in recent weeks after nearly four years of relative calm between the US Navy and IRGC vessels in the Gulf.

The uptick in IRGC harassment of US vessels comes as the two countries pursue indirect diplomatic negotiations over a mutual return to the 2015 nuclear deal, the Joint Comprehensive Plan of Action, in Vienna.

The Pentagon has sought to distance blame for the incidents from Iran’s political leadership, though IRGC-linked groups have continued attacks in Iraq and in Saudi Arabia, where the United States maintains military forces.

The IRGC regularly rejects US accounts of incidents in the Gulf. Such encounters largely halted in 2018 during the administration of President Donald Trump.

Yet IRGC-backed attacks on shipping and on Saudi Arabia’s oil infrastructure picked up as the Trump administration abandoned the 2015 nuclear agreement and enacted punishing sanctions on Iranian leaders and the IRGC.

The new administration of President Joe Biden is seeking a political solution to Yemen’s civil war, which has devolved into a stalemated proxy conflict between Riyadh and Tehran.

Progress on ending Yemen’s war and on reaching a renewed nuclear agreement with Tehran are two of the current administration’s major planned steps toward reducing its military resources in the region to focus instead on strategic competition with Russia and China.