A video released by the Navy onboard the USS Monterey showed a massive cache of arms seized from a stateless vessel in the Arabian Sea. 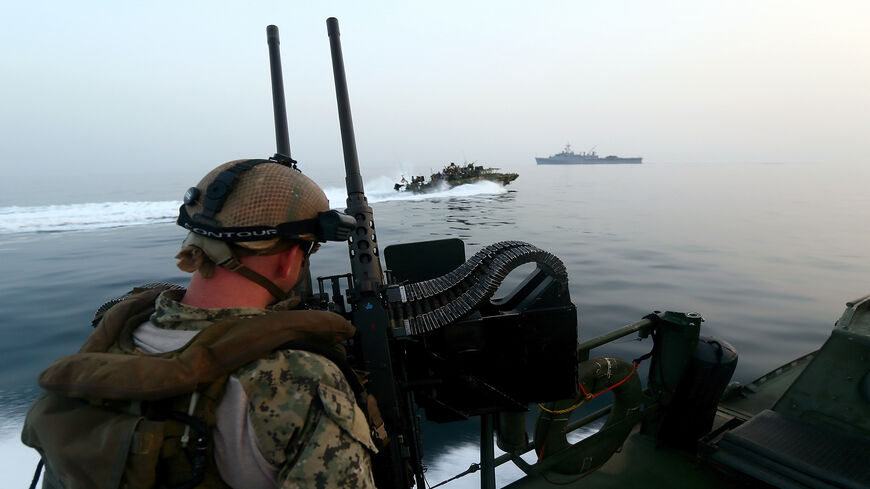 A US Navy personnel mans a heavy machine gun as he watches a Riverine Command Boat (C) cruising past the USS Ponci in the Arabian Sea, on the first day of the the biggest mine countermeasures exercise in the Arabian Gulf, May 13, 2013. - Marwan Naamani/AFP via Getty Images

The US Navy has released a video of a massive cache of rifles, machine guns and anti-tank rockets seized aboard a boat in the Arabian Sea last week.

The crew of the dhow was released after questioning and the weapons were loaded onto the Monterey over a two-day period, the Navy said.

An investigation has not yet determined where the weapons were headed, nor where they came from, the US Fifth Fleet said in a statement on Saturday.

Smuggling is common in the Arabian Sea. The US military has interdicted previous shipments of arms in the region, some of which it said were bound for Yemen’s civil war, where Houthi rebels continue to fight the government of President Abed Rabbo Mansour Hadi.

The USS Winston Churchill seized small arms and RPGs from two boats off Somalia’s coast in February. A Canadian navy ship seized a 1,286 kilogram (2,800 pound) shipment of heroin — the largest such capture ever recorded — in the Arabian Sea earlier last month.

CENTCOM commander Gen. Kenneth “Frank” McKenzie said in February that such smuggling constitutes an “intelligence problem” for the US military.

The US-backed International Maritime Security Construct was stood-up in 2019 to secure oil shipments in the Persian Gulf amid intense tensions with Iran. The US Navy separately leads a 34-member nation maritime coalition known as the Combined Maritime Forces in the Red Sea, Arabian Sea and Persian Gulf region.

A US Navy patrol boat fired warning shots after being harassed by IRGC Navy fast-attack boats last month in the second such incident this year. US officials have brought up the incidents with Iranian officials amid indirect talks in Vienna over a return to the 2015 nuclear agreement.