Iran’s IRGC Navy harassed US ships in Strait of Hormuz, US says

An IRGC patrol boat harassed two US Navy ships just days after one of them was involved in the seizure of 50 tons of smuggled ammunition bound for Yemen. 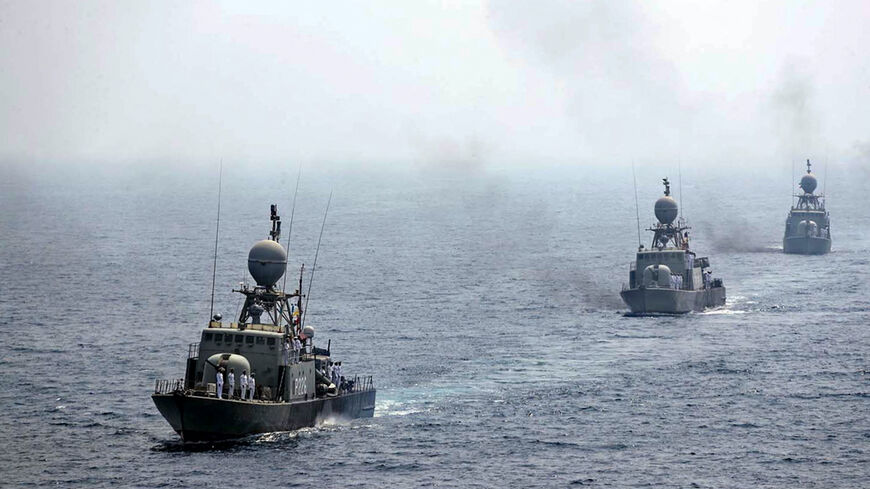 A handout picture provided by the Iranian Army official website on Sept. 12, 2020, shows Iranian naval ships parading during the last day of a military exercise in the Gulf, near the strategic strait of Hormuz in southern Iran. - AFP PHOTO / HO / Iranian Army website

A patrol boat belonging to Iran’s Islamic Revolutionary Guard Corps (IRGC) took “unsafe and unprofessional” action by crossing into the path of two US Navy ships as they transited the Strait of Hormuz after dark on Monday night, the US military said on Tuesday.

The IRGC Navy patrol boat “attempted to blind the bridge by shining a spotlight and crossed within 150 yards of the US ships — dangerously close, particularly at night,” US Central Command said in a statement.

The close encounter involved the guided missile destroyer USS The Sullivans and the sea base platform ship, USS Lewis B. Puller.

The US ships “safely de-escalated the situation through the employment of audible warnings and non-lethal lasers,” CENTCOM said. “US Navy ships continued their transit without further incident.

“The IRGC [Navy’s] actions violated international standards of professional and safe maritime behavior, increasing the risk of miscalculation and collision,” the command said.

Why it matters: Monday’s run-in is the latest between US and Iranian naval forces in the waters of the Gulf amid a relative lull in such incidents over the past year.

It follows the USS Lewis B. Puller’s seizure of some 50 tons of ammunition and rocket propellant smuggled on board a fishing vessel bound for Yemen in the Gulf of Oman late last week.

The commander of all US Navy forces in the Middle East, Vice Adm. Brad Cooper, said Iran was behind the shipment.

What’s next: This is unlikely to be the last run-in between Iran’s naval forces and US ships in the region as Fifth Fleet doubles down on efforts to interdict Iranian smuggling efforts.

Last month, US ships seized a fishing boat that had departed Iran with more than 170 tons of urea fertilizer and aluminum perchlorate bound for Yemen. The latter substance was enough to make fuel for more than a dozen ballistic missiles, Vice Adm. Cooper said at the time.

The Houthis have repeatedly targeted Saudi Arabia with ballistic missiles, drones and exploding boats in recent years in response to the Riyadh-led war effort against their forces in Yemen. Iran denies it provides arms to the Houthi rebels, but US officials say Tehran continues to do so in violation of the 2015 arms embargo on Yemen.

The flow of Iranian projectile weapons to the Houthis and other militias in the region has added to strain in Washington's strategic ties with Arab Gulf states, whose leaders have requested greater US protection from such attacks – something the Pentagon has been hard-pressed to provide in recent years.

Cooper reiterated to reporters at the Pentagon in October that Iran remains the top subject of the US military’s concerns in the region, but said the rate of encounters at sea were “steady.”

“We interact with them every day. Nearly all [interactions] are safe and professional,” Cooper said at the time.

“We’re very focused on Iran and their capabilities,” Cooper said, adding, “We watch them every single day.”

Know more: The US Navy’s Fifth Fleet has been stepping up efforts to use unmanned sea drones to monitor the waterways of the Middle East. Both Iran’s regular Navy and the IRGC Navy have taken notice.

The two forces attempted to capture US Navy Saildrones in the Red Sea and Persian Gulf in August and September, respectively, in an effort that Fifth Fleet commander Cooper described as “clearly coordinated.”