The seizure comes as the US Navy has increasingly deployed unmanned technology to help monitor weapons smuggling and other maritime activity in Middle Eastern waters. 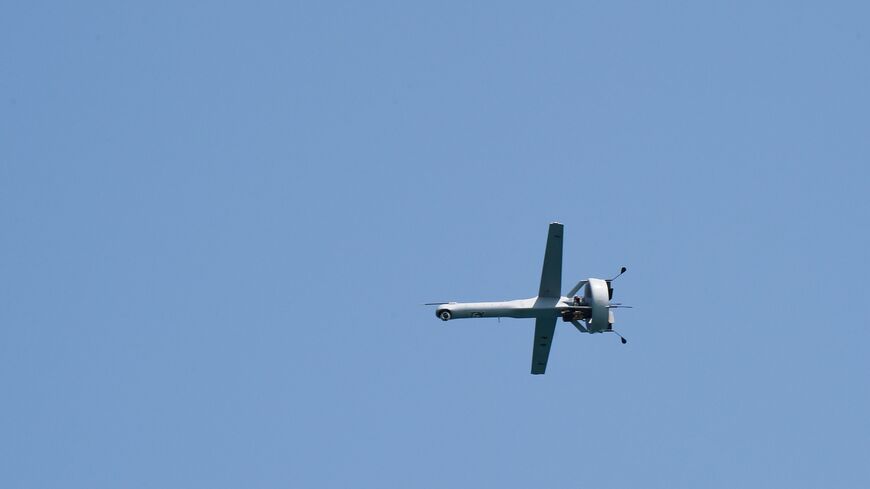 A US Navy Martin UAV drone flies over the Gulf waters in joint naval exercise between US Fifth Fleet Command and Bahraini forces on Oct. 26, 2021. - MAZEN MAHDI/AFP via Getty Images

The crew of a ship affiliated with Iran’s Islamic Revolutionary Guard Corps (IRGC) attached a cable to a US Navy unmanned maritime drone in the Persian Gulf on Monday night and attempted to tow it away, the US military said.

The IRGC Navy support ship Shahid Baziar later released the Saildrone after the US Navy coastal patrol ship USS Thunderbolt, an MH-60S Sea Hawk Helicopter and an inflatable US boat approached on the Iranian vessel in response.

Officers aboard the Thunderbolt made bridge-to-bridge contact with the IRGC Navy ship via radio, prompting its crew to untether the Saildrone, Cdr. Timothy Hawkins, a spokesperson for the US Navy’s Fifth Fleet, told Al-Monitor.

“We made clear that the vessel they were towing was US government property and that we were closing [in] to retrieve it,” Hawkins told Al-Monitor, adding, “It was quite clear as to our intentions.”

Four IRGC fast-attack boats were spotted in the area after the Iranian ship cut the drone loose, but they did not come near the Thunderbolt and no hostilities occurred, Hawkins said. He called the US Navy’s response “de-escalatory,” noting that the incident occurred in international waters.

Vice Adm. Brad Cooper, commander of the US Navy’s Fifth Fleet, called the IRGC Navy’s attempt “flagrant, unwarranted and inconsistent with the behavior of a professional maritime force” in a statement on Tuesday.

The head of all American forces in the Middle East, Army Gen. Michael “Erik” Kurilla, praised the US Navy’s response to what he called Iran’s “illegal action.”

Why it Matters: The US Fifth Fleet, which patrols the waters of the Middle East, has been experimenting over the past year with unmanned sea drones linked to an artificial intelligence network to monitor weapons trafficking and other maritime activity in the region’s waterways.

The effort is led by the Fifth Fleet’s Task Force 59, which was established last year with the goal of having 100 unmanned systems in the water by next summer.

The technology aboard the Saildrone which the IRGC Navy ship attempted to purloin “is available commercially and does not store sensitive or classified information,” Fifth Fleet said today.

The drones are equipped with sensors, radars and cameras designed to gather information on seafaring activity in the region as the US Navy shifts the bulk of its focus to the Pacific amid US strategic competition with China.

What’s Next: The US Fifth Fleet is seeking to encourage regional navies to partner with Task Force 59.

Jordan offered use of its naval base on the Red Sea port of Aqaba for the unmanned project last year. Israel and Kuwait are among other candidates, Cooper has said. The US is planning an exercise involving Task Force 59 in November.

Know More: Read Jared Szuba’s report on how the Fifth Fleet has reorganized the multinational maritime task forces which it supports in a bid to crack down on rampant smuggling in Middle Eastern waters.