Iran navy attempts to capture US drones in Red Sea

A US military official rejected Iran's claims that the unmanned sea drones pose a hazard to commercial shipping in the region. 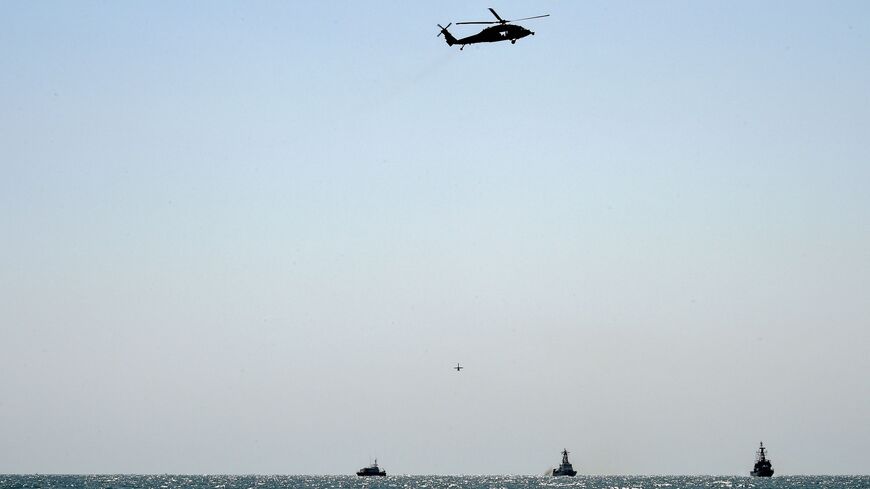 An Iranian warship picked up two US naval drones in the Red Sea on Thursday before releasing them Friday morning as American destroyers followed in pursuit.

Iranian media outlets aired footage said to show the ship’s crew later jettisoning one of the drones, which it had reportedly picked up after warning a nearby US warship that the unmanned vessels posed a hazard to maritime shipping lanes.

A US defense official speaking to Al-Monitor on condition of anonymity confirmed the incident took place but pushed back on Iran’s version of events, saying two US Navy destroyers operating nearby only followed the Iranian ship after it had picked up the drones in international waters and began to sail away.

“They didn’t just tow them, they put them onto the ship,” said the official, who requested anonymity because the US Navy had not yet publicly released its account of the incident.

The US destroyers trailed the Iranian frigate “for hours,” warning its crew that they were in possession of US government property, the official said. Personnel aboard the Jamaran reportedly denied the charge and continued sailing.

As an American MH-60 Seahawk helicopter launched from one of the destroyers approached “within visual range” of the frigate, members of its crew ran out onto the deck and attempted to cover the drones with tarp, the American official said.

“They eventually acknowledged as night fell that they would give them back, [and that] they had been ordered by their higher headquarters to return them. But they wanted to wait until daylight to return them for safety reasons,” the official said.

The US warships hauled in the Saildrones on Friday morning after monitoring the Iranian vessel through the night.

Why it matters: This marks the second time this week that Iranian forces have attempted to seize 23-foot Saildrones in Middle Eastern waters. It is also the first attempt by Iran's navy, and the first such in the Red Sea.

On Monday, US officials said an Iranian IRGC navy ship attempted to capture a Saildrone in the Persian Gulf. The crew of the Shahid Baziar attached a cable to the drone and began to tow it away. The ship’s crew later released it following warnings from the pursuing USS Thunderbolt, according to the US Navy’s Fifth Fleet.

The Iranian Navy and IRGC Navy are separate forces, but their command structures have grown closer over the past several years. Both are ultimately overseen by the chief of staff of the Iranian Armed Forces, IRGC Maj. Gen. Mohammed Bagheri.

The Fifth Fleet’s Task Force 59 has been experimenting with commercially available, unmanned and unarmed sea drones over the past 11 months to better monitor smuggling and other maritime activity in the region’s waterways as the Pentagon diverts some of its forces to other parts of the globe amid strategic competition with China.

“The area is so vast that we just can't do it alone," 5th Fleet commander Vice Adm. Bradley Cooper said in April.

Task Force 59 plans to have deployed 100 seafaring drones in the water by next summer and aims to bring regional navies into collaboration on the project, which is seen as a potential model for US-led multinational artificial-intelligence data integration.

Monday’s incident was the first time Iran has attempted to capture one of Task Force 59’s drones, American officials said. Iranian media cited an unnamed military official as alleging the sea drones have caused maritime accidents since appearing in the region’s waterways.

The US defense official who spoke to Al-Monitor on Friday rejected that claim, saying the drones have been deployed for for nearly a year “without incident.”

“We maintain close overwatch. We don’t just leave them out there,” the official said.

Iran has been implicated in a string of sabotage attacks on commercial shipping in Middle Eastern waterways in recent years. Tehran regularly denies the allegations.

What’s next: Unless the Fifth Fleet comes up with a credible deterrent, its commanders may be in for more games of cat and mouse. Iran’s naval forces are likely to be more surreptitious in future attempts to disrupt the work of Task Force 59.