The 70-ton haul suggests the US Navy's yearslong game of cat-and-mouse with Iran-backed arms traffickers in the Gulf of Oman is beginning to pay off. 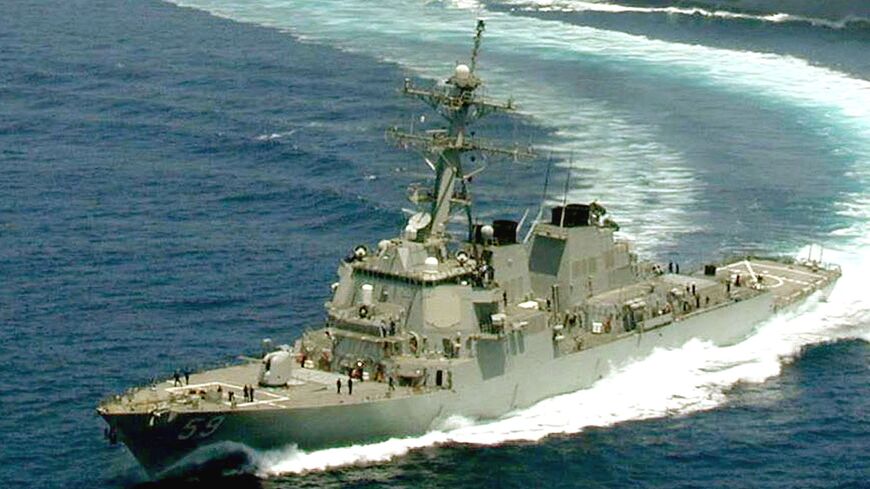 The destroyer USS Russell pulls away from USS John C. Stennis following an underway replenishment of 100,000 gallons of fuel from the aircraft carrier May 23, 2000 in the Arabian Gulf. - Benjamin J. Kuntz/U.S. Navy/Getty Images

US Navy and Coast Guard ships operating in the Gulf of Oman interdicted a Yemen-bound fishing boat that had departed Iran laden with more than 70 tons of aluminum perchlorate, a chemical frequently used to make explosives as well as rocket and missile fuel.

US Coast Guard ship John Scheuerman and Navy guided missile destroyer USS The Sullivans intercepted the boat last week in international waters “along a route historically used to traffic weapons to the Houthis in Yemen,” the Navy announced today.

It took a week for US crew members and explosive ordnance disposal technicians to fully document the seized cargo, which also included more than 100 tons of urea fertilizer, a chemical also used in the early stages of manufacturing explosives.

“This was a massive amount of explosive material, enough to fuel more than a dozen medium-range ballistic missiles depending on the size,” Vice Adm. Brad Cooper, the commander of all US Navy forces in the Middle East, said in a statement today.

“The unlawful transfer of lethal aid from Iran does not go unnoticed. It is irresponsible, dangerous and leads to violence and instability across the Middle East,” Cooper said.

Why it matters: The enormous seizure is the first of its kind by the United States, which has been doubling down on efforts to dent the flow of Iranian arms to Yemen’s Houthi rebels amid that country’s eight-year civil war.

Working with counterparts in the Middle East, the US Navy’s Fifth Fleet has interdicted urea fertilizer, rocket components and large caches of small arms bound for Yemen from Iran in recent years, but until last week no aluminum perchlorate.

The Navy said Iran’s shipments violate the 2015 UN arms embargo on Yemen. A nationwide ceasefire between the country’s warring sides expired in early October, and despite recent drone attacks by the Houthis against Yemeni oil infrastructure, widespread fighting has yet to break out again.

Officials in Washington have accused Iran for years of providing the Houthis with ballistic missile and drone components which the rebels have used to target Yemen’s government and the country’s neighbors, in particular Saudi Arabia and, more recently, the United Arab Emirates.

Facing pressure from within his own party and few signs of success on the ground, President Joe Biden cancelled US military support for the Saudi-led war effort to prop up Yemen’s government shortly after taking office last year.

That decision was followed by renewed Houthi projectile attacks into Saudi Arabia and the UAE, further straining ties between Gulf states and Washington.

In April of this year, the Navy’s Fifth Fleet established a fourth multinational task force focused on the waters off Yemen in a bid to make combined patrols in the region’s nearly 2.5 million square miles of water more efficient.

“It’s about 5,000 miles as you go around Suez around the Arabian Peninsula,” Fifth Fleet commander Cooper told reporters at the Pentagon last month. “There’s no single navy alone that can patrol that distance.”

The fleet has seen a surge of drug interdictions over the past two years, with more than $500 million worth seized last year – more than four times the value seized in 2020, Cooper explained last month.

Under Cooper’s command, the Fifth Fleet aims to double its multinational exercises this year to at least 60, as US Central Command pushes for greater military cooperation across the region to build a defensive bulwark against Iran.

By the end of this month, the fleet’s experimental Task Force 59 plans to finish deploying some two dozen commercially available unmanned surface vessels (USVs) in a bid to broaden surveillance on illicit activity in regional waters.

Cooper suggested during a visit to the Pentagon last month that the sea drones have deterred some Iranian activity, but he and other defense officials would not cite specific examples.

“We know that we were making them nervous,” Schuyler Moore, US CENTCOM’s chief technology officer, told Al-Monitor during an interview at the command’s headquarters last month.

The Fifth Fleet commander last month expressed confidence to reporters that the Navy and its regional partners are on track to deploy 100 USVs in the region’s waters by the summer of 2023, with roughly 80 belonging to partner nations.

Cooper acknowledged, however, that only the US has deployed such drones, and so far only Bahrain and Kuwait plan to obtain the devices.

It will be up to other partner nations to decide whether they purchase the hardware from US, Turkish or Chinese firms, but Cooper wouldn’t specify to Al-Monitor whether purchase of USVs made outside the US would hamper cooperation with Task Force 59.

“The ability to have more eyes in the water with unmanned systems is serving us well. More importantly, it’s serving our partners well,” he said. “We’re engaged with every single country in the region on this.”

What’s next: The Pentagon’s top policy chief, Colin Kahl, is expected to visit Fifth Fleet headquarters in Bahrain this week to learn more about the Navy’s efforts.

Kahl’s visit will follow a full day of meetings with Israeli defense officials on Wednesday to discuss emerging technologies ahead of the Manama Dialogue forum later this week. The Pentagon's Undersecretary of Defense for Research and Development Heidi Shyu and top Middle East policy official Dana Stroul were scheduled to attend the discussions.

“Many of our partners in the region see that the Israelis are actively countering Iranian threats on a daily basis, have cutting-edge military capabilities, intelligence, interdiction, etc.,” a senior defense official told a gathering of reporters at the Pentagon this week on condition of anonymity.

“They want to explore expanding cooperation with Israel,” the US official said.