Iranian teachers are joining in the protest movement against President Raisi's administration, but security forces are responding quickly to stop them. 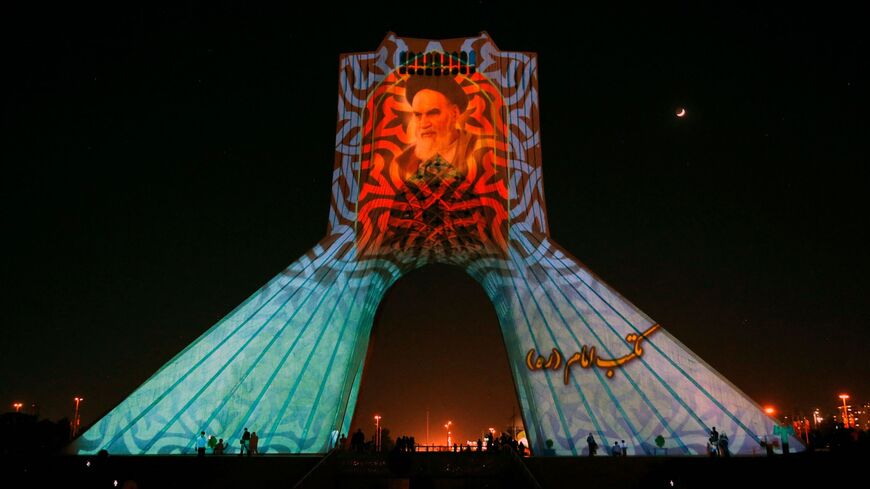 Iran's Azadi (Freedom) Tower is illuminated with pictures of the late Supreme Leader Ayatollah Ruhollah Khomeini to mark the 33rd anniversary of his death in the capital Tehran, June 3, 2022. - AFP via Getty Images

Thousands of teachers rallied across Iran on Thursday to demand a decent life and call for the release of their colleagues, who are languishing in state-run prisons.

In most of the protests in the capital, Tehran, as well as in major cities including Ahvaz, Sari, Rasht, Sanandaj and Kermanshah, the teachers were surrounded by a palpable presence of riot police, according to videos posted on the official outlet run by the unionists.

Only hours into the rallies, Iranian intelligence agents had detained up to 100 leading activists nationwide, including 60 in the southern city of Shiraz alone, in what appeared to be a pre-emptive measure to minimize the size of the demonstrations.

In their slogans, the protesting teachers said they "preferred death over humiliation" and slammed hard-line President Ebrahim Raisi for his "lies" and "much ado without fulfilling promises." The teachers accused Raisi of pushing Iran's middle class well below the poverty line in less than a year of his presidency.

"Public service employees, laborers, teachers and retirees have all lost the power to battle the untamed inflation, with their purchasing power waning on a daily basis," the teachers' final communique read. They were referencing a chain of demonstrations in recent months by various sectors of Iranian society against skyrocketing living costs blamed on the state's economic policies.

In their strongly worded statement, the teachers also expressed dismay that "those in power are resorting to extreme violent measures instead of listening to the protest cries." They accused the intelligence community of pressuring their arrested colleagues into "making confessions under duress."

The Islamic Republic has alleged that some of the protest leaders are connected to foreign states. Last month, the Intelligence Ministry announced the arrest of French teacher unionist Cecile Kohler and her partner Chuck Paris, who were in the country on tourist visas. Labelling the pair as "spies," the Intelligence Ministry claimed that they were on a mission to exploit teacher protests and turn them into violent unrest.

In a brief documentary aired by state TV, the Iranian teacher unionists were projected as saboteurs backed by foreign intelligence agencies operating against the Islamic Republic. The teacher unions, however, dismissed the allegations as "mud-slinging." They argued that links with the French teachers union as well as Education International, the world's largest teachers union, were all out in the open, and the intelligence apparatus was advancing its "espionage" narrative to provide a pretext for a harsher crackdown and the subsequent elimination of their civil movement.