State media aired what it said was Intelligence Ministry footage of the arrest of two French citizens, accused of attempting to "instigate chaos" by inciting Iran's protesting teachers. 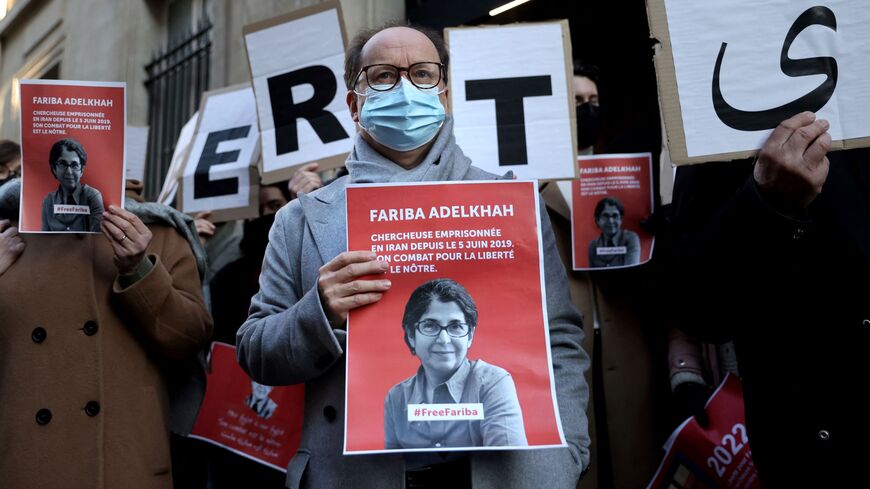 Colleagues of the French-Iranian academic Fariba Adelkhah hold placards depicting her as they gather in Paris on Jan. 13, 2022, following the decision of the Iranian government to send her back to prison after a period of house arrest. - THOMAS COEX/AFP via Getty Images

One week after a statement on the arrest of two Europeans, Iran's Intelligence Ministry revealed the identities, nationality and details of what it claimed to be close surveillance of the two.

Aired by the conservative-controlled state television, the Intelligence Ministry's video report referred to French citizens Cecile Kohler, 37, and Chuck Paris, 69, as "spies," who landed in Tehran from neighboring Turkey on a tourist visa April 28.

The report said the pair were under close surveillance upon their arrival and were followed to their meetings with Iranian teacher unionists. Relying on an audio file purportedly taken at one such meeting, the Intelligence Ministry alleged that the two French nationals had established an "organized and coordinated" link to provoke the unionists into expanding their protests.

The video showed what appeared to be a nighttime chase-and-stop operation close to Tehran's International Imam Khomeini Airport, before the pair were about to board their return flight May 12.

The video also embedded photos of four Iranian teacher-activists with the two French nationals. The four, along with several others, have been detained on multiple occasions for organizing teacher protests. Gaining particular momentum in the past two years, those rallies have been held over deteriorating livelihood conditions and the release of colleagues. Iranian authorities have cracked down on the protests, with videos showing security forces beating and bundling teachers into vans to be taken sometimes to undisclosed locations, according to the unionists' social media accounts.

As recently as this month, over 20 teachers were arrested in nationwide rallies marking May Day. And on Monday, the Intelligence Ministry detained six teacher-activists in the western city of Yasuj for their alleged ties with "foreign-based" opposition.

Following the initial announcement last week, which provided few details, France's Foreign Ministry summoned Iran's ambassador to Paris to demanded the immediate release of the French nationals. A French teachers union also sounded the alarm that one of its staffers had gone missing during a holiday visit to Iran.

The new arrests bring to five the number of French nationals held in Iran. Most famously, in 2020, French-Iranian anthropologist Fariba Adelkhah was sentenced to six years in jail over security and propaganda charges. She is currently serving her time under house arrest in Tehran.

The new arrests also come at the height of tensions between Tehran and Stockholm over a similar case in which a Swedish-Iranian scientist is on death row for espionage. Some observers say Iranian authorities are exploiting the file to pressure the Swedish government to drop war crimes charges against a former Iranian judiciary official, allegedly involved in the mass execution of thousands of political prisoners in 1988.

With a history of putting foreign nationals on trial, Tehran has long been accused of taking tourists or visiting academicians as hostages to press its agenda amid tensions with the West. The Islamic Republic has repeatedly denied the charge, arguing that its judiciary acts with independence from its foreign policy.