The strikes come as the teachers accuse the government and parliament of failing them. 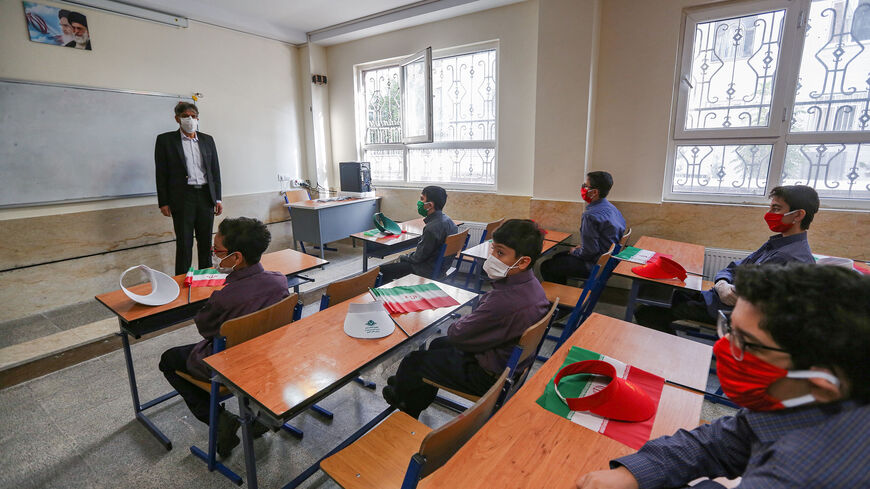 Iranian school children sit together in a classroom while mask-clad and distanced apart from each other on the first day of schools re-opening in the capital Tehran on September 5, 2020. - ATTA KENARE/AFP via Getty Images

Furious Iranian teachers continued to hold sit-ins and strikes across the nation over a series of unaddressed demands, at the top of them a long-stalled bill to help them make ends meet.

The protests have gathered steam since last weekend as the teachers congregate in the thousands outside local Education Ministry offices in some 120 cities and towns, including even the conservative and clerical city of Qom, where they shouted slogans for decent salaries.

One such rally outside the Iranian Parliament in the capital Tehran turned ugly after security forces violently attempted to disperse the crowds, among them elderly retirees.

The bill, which has been sitting around for months, would set a minimum monthly salary that the teacher unions hope will effectively take them beyond the poverty line.

“Stand up and fight discrimination,” they chanted at the rallies. The teachers believe consecutive governments have looked the other way in the face of their calls for a decent life.

In what appeared to be an attempt to soothe the anger, Iran’s hard-line Education Minister Yousef Nouri told state media outlets on Tuesday that the bill was set to be ratified by the conservative parliament Dec. 15. He promised it will come into force upon “notification” to the government. The minister did not, however, specify a date.

Broadening the scope of their demands, the protesting teachers are also pushing for the release of their colleagues detained in previous demonstrations, many of them held incommunicado for months. Last week, a senior and well-known member of the teachers union, Rasoul Bodaghi, was beaten and arrested at his home in Tehran.

The advocacy group Campaign to Free Political Prisoners in Iran underscored the ordeal of those teachers in a statement, calling on Iranian authorities to abandon their practice of “intimidation, harassment and suppression against teachers” and demanded their “immediate and unconditional release.”

The teachers have also been speaking out against corruption, chanting at some of the rallies that if one case of embezzlement were resolved, they could get paid enough. It was a reference to proven fraud at institutions run by the Education Ministry with widespread misuse of pensions and other funds deducted from the teachers' monthly salaries.

The ongoing strikes are the last in a chain of protests from various sectors and walks of life over Iran’s economic hardships. Laborers at Iran’s wealthy Oil Ministry and employees at a long list of state-owned industries have been venting their anger at the authorities over long-delayed payments that have been made more painful by Iran’s skyrocketing inflation rates.

The Iranian government’s repeated pledges to address those grievances have yet to be fulfilled as the corruption-plagued, ailing economy continues to crumble under massive budget strains, slashed oil revenues and onerous US sanctions.