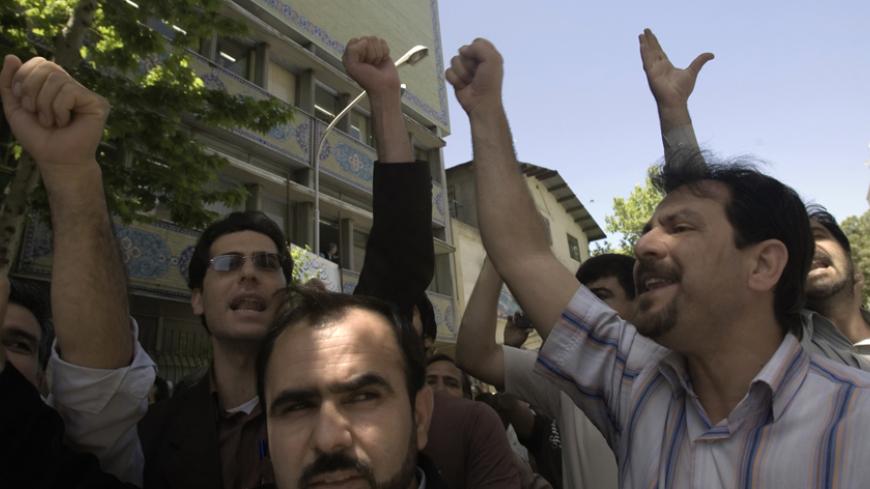 Iranian teachers take part in a rally asking for better pay in front of a Ministry of Education building in Tehran, May 2, 2007. - REUTERS/Raheb Homavandi

The Iranian Labour News Agency reported Jan. 22 that hundreds of Iranian teachers had gathered in front of their local education offices in the cities of Shahrud and Marivan to protest "their inadequate living conditions, the Ministry of Education’s upcoming budget and inadequate insurance coverage from Talaee Insurance."

A video shared on social media showed hundreds of teachers gathering in the city of Marivan. A representative of the group reads a statement listing the teachers’ demands: nondiscriminatory payment of wages to all government employees, equal pay for men and women, and a suitable and secure environment for teachers.

Prior to these gatherings and sit-ins, 6,000 Iranian teachers addressed a letter to parliament Speaker Ali Larijani, expressing their dissatisfaction with their working conditions. “The majority of Iran's teachers are not able to take care of their basic needs and live under the poverty line. Their status in society has been damaged and they have lost their motivation to work,” stated the letter.

A few days prior to the sit-in, government spokesman Mohammad-Bagher Nobakht announced an increase in the Ministry of Education's allocated budget, from $5.58 billion to $6.67 billion in 2015. With this new budget, he said, teacher salaries will increase by 14%. Yet, according to critics, this salary increase is just another step backward for the teachers.

Shirzad Abdollahi, an education analyst living in Tehran, told Al-Monitor, “This year, the rate of inflation has been at least 25%, and if we compare salary increases with inflation, then, compared to the previous year, the teachers’ purchasing power will decrease by 11%.”

On Jan. 28, a week after the protests, the central council of the Teachers Trade Union stated that the budget increase will not improve teachers’ financial conditions. The statement read: “A realistic look at next year’s budget makes it clear that we will have serious problems with retirement packages, school expenses, welfare expenses and even teacher salaries.”

An active member of the union who participated in the Shahrud protest told Al-Monitor on condition of anonymity, “One thing is certain and that is this situation is no longer tolerable. Instead of just giving promises, [President Hassan] Rouhani needs to look for a serious solution. Teachers are on their last leg. This situation cannot continue.”

Principlist member of parliament Hossein Naghavi Hosseini asked parliament to protest the insufficient increase in teacher salaries, saying, “If next year the same budget is allocated for the education sector, we will certainly not see any improvements in the conditions of the teachers and the education personnel.”

Ataollah Soltani Sabour, another Principlist member of parliament and a member of the parliamentary Education Commission, criticized the administration’s proposed budget for the education sector: “An experienced teacher is only paid a $470 salary. This much discrimination against the education system is worrisome.”

In his 2013 election campaign, Rouhani said, “I say explicitly that we need to save Iran’s economy if we are planning to save its education system. Any plan that does not aim to improve the country’s economy, is a sham.”

After the 1979 Islamic Revolution, the country's limited political environment made it difficult for teachers to organize protests. The situation remained as such until 1997, when Mohammad Khatami was elected president. “These union protests and the very existence of these independent teacher unions are the result of the relatively open environment of schools during the Reform era,” Abdollahi told Al-Monitor.

In 2002, from Jan. 16-26, teachers spontaneously organized street demonstrations in Tehran. Then, in February and March 2004, some teachers in Tehran and other cities went on strike for a week. In 2007, about 10,000 teachers gathered on three different occasions in front of the Iranian parliament to pressure the administration of Mahmoud Ahmadinejad to enact the pay-parity bill. This bill, which was confirmed by Khatami's Reformist administration, requires that the government increase salaries of employees, including teachers. Although parliament passed the bill, Ahmadinejad said that it had technical problems. His refusal to enact the bill resulted in massive teacher protests.

On March 14, security forces attacked the teachers’ gathering, with Reformist websites reporting the arrest of about a thousand teachers. At the time, 22 teachers faced punishments ranging from being fired from their jobs to imprisonment and exile. Three teachers — Rasool Bodaghi, Mohammad Davari and Mahmoud Bagheri — are still in prison. No one was arrested, however, during the Jan 20-21 demonstrations.

After the sit-in, the central council of the Teachers Trade Union requested an urgent meeting between the teachers’ representatives and the president. Rouhani has still not given them an answer.

A political analyst in Tehran told Al-Monitor, “Teachers know that because of international sanctions and the economic depression, Rouhani is really not able to allocate [a larger] budget for the Ministry of Education. However, they want to show that they are not satisfied with the current situation to encourage the president to be even more determined in succeeding in the negotiations and ending the economic depression.”