Palestinian teachers in the West Bank have gone on a full strike, demanding a pay increase from the Ramallah government. 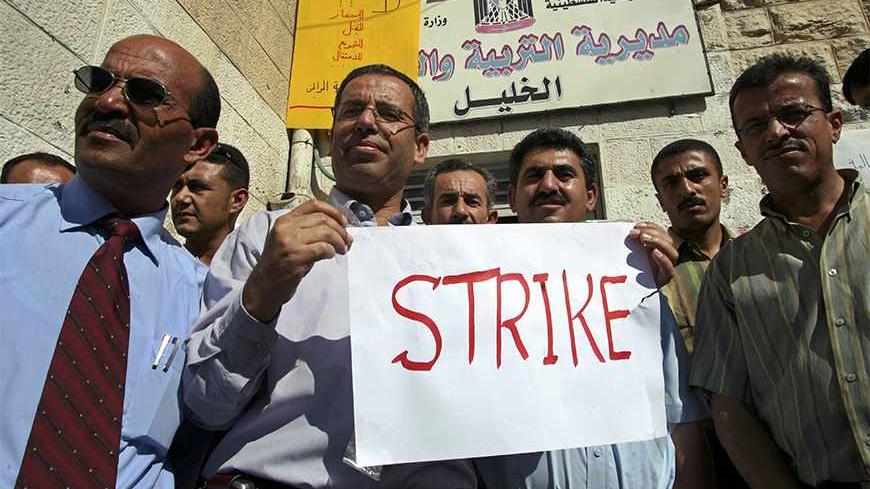 A partial Palestinian teachers strike last weekend turned into a full strike on Monday, Dec. 2, with plans to hold a demonstration outside the prime minister’s office on Tuesday. The Palestinian government thought that it could avert the full strike when it won a decision by the Palestinian High Court of Justice calling on the Teachers Union to delay the strike until the government has a chance to remedy some of the complaints.

But the teachers defied the court decision, claiming that they were not officially informed of the ruling and that they only heard about it in the media. A meeting late Sunday night between the head of the teachers union, Ahmad Suheil, and President Mahmoud Abbas failed to break the deadlock.

More than 1 million Palestinian students in the West Bank, including those sitting for the matriculation exams, have been affected by the strike. Schools in East Jerusalem have received a waiver from the strike because of their unique and sensitive situation.

The strike by the powerful teachers union comes only two months after a previous agreement was reached between the union and the Palestinian government. The Sept. 5 compromise was declared by the teachers union head a "unique and historic” deal. The agreement included a 10% increase in teachers' salaries to be implemented in two stages, the first at the start of 2014.

Another problem has to do with the delay in the issuance of a presidential decree approving the pay increase for teachers. The government of Prime Minister Rami Hamdallah has not made the request for a decree. Abbas generally prefers to issue a decree only once he receives a recommendation in writing from the government.

A third problem is centered on the cost of living. The teachers are demanding a cost of living increase of 2.7% while the Palestinian government has provided teachers with a 0.075% increase.

Regarding its efforts to support the education sector, the Palestinian government signed an agreement with the United Nations Development Program last month to build schools in the East Jerusalem area supported by a $3.8 million grant from Norway.

The latest strike by Palestinian teachers follows similar strikes by other professionals, all reflecting the tense financial situation in the occupied territories. The irony is that the leaders of the unions are often aligned politically with the ruling PLO factions, and the strikes are carried out purely on a professional and union basis without any political considerations.

This development shows that neither Abbas nor Hamdallah — and not even the courts — will be able to muscle through opposition by the public-service community. The conflict also puts into question the larger issue of where Palestinian funds are going.

An infographic that has become popular in the media of late shows that Palestinian ministers and members of parliament, whose annual salary is about $36,000, are actually receiving nearly 24 times the average Palestinian citizen’s income.

In addition, a third of the Palestinian budget goes to security personnel, and one can see that the coming struggles in Palestine will not be between political factions, but rather between the government and its constituents, especially civil servants, who represent the single largest recipients of public funds.