Sandstorms have pummeled the region this year, particularly Iraq. 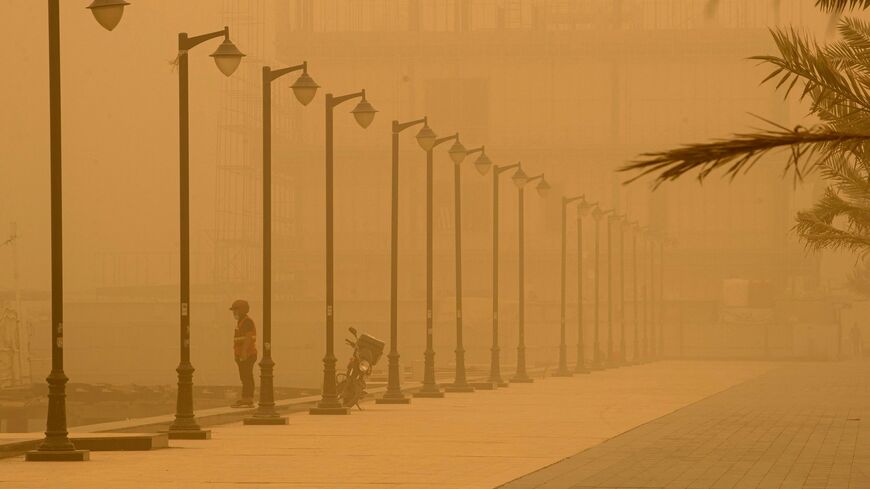 A man stands on the bank of the Shatt al-Arab waterway, formed at the confluence of the Euphrates and Tigris rivers, in Iraq's southern city of Basra on May 23, 2022, during a sandstorm sweeping the country. - HUSSEIN FALEH/AFP via Getty Images

Iran, Iraq and Syria have pledged to work together on the sandstorms plaguing the region.

The official Islamic Republic News Agency reported yesterday that Iran’s Department of the Environment signed a memorandum of understanding on combating the storms with Syria. The department will sign another memorandum with Iraq in July, according to the agency.

The Middle East has been hit with numerous sandstorms this year. Iraq has been particularly affected, with thousands of people being admitted to hospitals due to complications from the storms. There was also a sandstorm in Syria today.

The storms are caused by strong winds in desert areas. They occur when the winds lift sand and dust into atmosphere from bare and dry soil, according to the World Meteorological Organization.

In this sense, increasing desertification in Iraq is contributing to the storm issue, Adnan Abu Zeed reported for Al-Monitor last month.

Part of the cooperation will focus on working to counter desertification and water scarcity issues. Iraqi Environment Minister Jassim al-Falahi said May 30 that Iraq’s recent diplomatic work on the issue focuses on “dealing with the challenges of dust storms, water scarcity and desertification,” the Iraqi News Agency reported.

The issue is a regional one. The Islamic Republic News Agency report added the countries will work to "to control the foreign sources of the dust storms.” Falahi said that most of the storms originated in Saudi Arabia, Jordan and eastern Syria.