Regional countries have decided to cooperate in an attempt to reduce the severity of sandstorms. 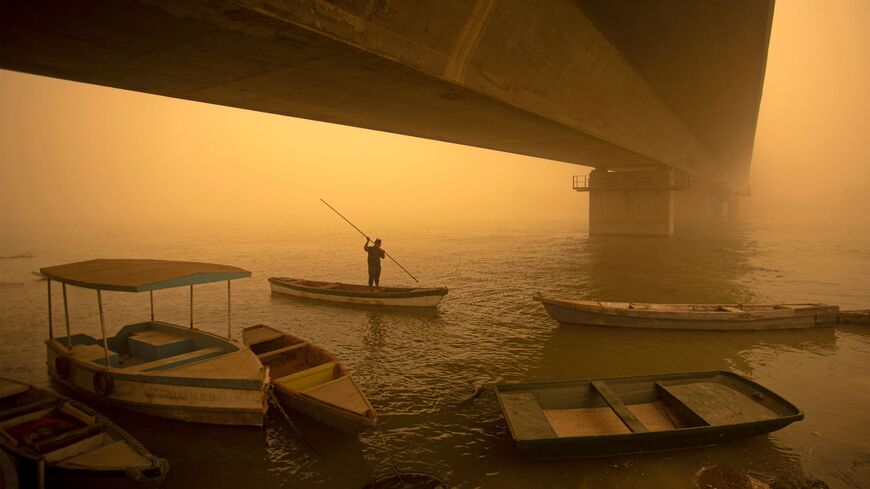 A fisherman paddles his boat during a sandstorm in Iraq's southern city of Basra on May 16, 2022. Another sandstorm that descended on climate-stressed Iraq sent at least 4,000 people to hospitals with breathing problems and led to the closure of airports, schools and public offices. - HUSSEIN FALEH/AFP via Getty Images

In response to an unprecedented number of sandstorms disrupting daily life, officials from Iraq, Kuwait, Iran and Syria spoke on the need to collectively address this increasing problem.

According to Fars News, Iran’s Foreign Minister Hossein Amir-Abdollahian spoke on the phone with his counterparts from Syria, Kuwait and Iraq on the need to address the sandstorms blanketing parts of their countries. The foreign ministers said that officials from their environmental institutions, along with their foreign ministries, would travel to Iraq and Syria to collaborate. Officials also discussed the possibility of bringing Saudi Arabia into the group.

Iran foreign ministry spokesman Saeed Khatibzadeh said that for the past two months Iranian officials have been working with Iraqi officials to address the sandstorms, which have been causing flight delays, school closures and health problems for citizens in the region. Khatibzadeh said that recently Syria has been added to the working group and Iran hopes to incorporate other countries as well.

Iraq has suffered over eight major sandstorms in the last two months. In addition to Saudi Arabia, the United Arab Emirates have also suffered sandstorms which have reduced visibility outdoors and forced residents to stay indoors. In addition to the disruption of daily life, thousands have been hospitalized.

Sandstorms are not a new phenomenon, but their frequency in recent months has caused alarm. There are various possible reasons, but many experts say the largest factor is water management. For instance, much of Iran’s water is used for farming, which has caused ground water to dry up or become greatly diminished.

Other experts point to the construction of dams in Turkey, which has dried out rivers and lakes in Iraq and Iran, permitting more sand and dust to gather during these storms. Other factors include climate change. The decrease in rainfall has exacerbated the problem in the region, leading to less vegetation in the country and more dust.

Iranian environmental officials have been warning for some time that the country cannot continue on its current path of water management. One famous environmentalist, Ali Shariat, warned that the lack of ground water in the country was more relevant than the nuclear negotiations currently taking place.