Dust storms are becoming a growing problem in Iraq, leaving many human victims as well as environmental damages and economic losses in their path, and the government's attempts to counter the storms have so far been unsuccessful. 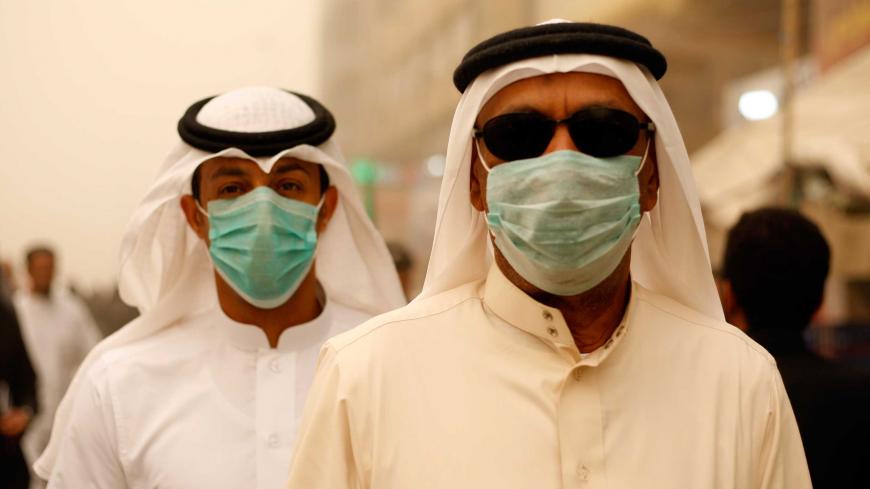 On Nov. 3, NASA published clear images taken by its satellites of the severe dust storm that hit Iraq recently. The climate changes sweeping Iraq are causing human casualties and economic damages. Hundreds of cases of suffocation were recorded. The Ministry of Health announced Oct. 30 that there were more than 4,200 cases of suffocation in most governorates, including 528 in Karbala. During the dust storm, the Iraqi Civil Aviation Authority canceled its flights, and Iranian flights to Baghdad and Najaf airports were also canceled. Ninevah province recorded 1,108 cases of suffocation in the camps for internally displaced persons.

The storms also affected the course of the battles between the Iraqi forces and the Islamic State (IS). On Oct. 31, the Iraqi forces were forced to postpone the campaign aimed to retrieve the city of Qaim, west of Anbar, from IS because of the lack of visibility caused by the dust storms.

While dust storms are occurring in neighboring countries such as Saudi Arabia, Kuwait and even Iran, "Iraq is one of the most affected countries by the storm, at the level of its environment, individuals’ health and economy," said Amer Habib of the Technical College Musayyib in Babil province and the director of a project on organic fertilizers in Babil. "This is due to the fact that Iraq is a barren land where vegetation is scarce. Human activities have swept away orchards and agricultural lands, which also led to the decrease of the rivers’ water levels and the lack of rainfall, which resulted in the drying up of huge areas of agricultural spaces."

In 2011, the World Meteorological Organization identified dust storms as a natural disaster. Several countries around the world have strengthened their defense strategies against this environmental threat with green belts of trees that are resistant to drought and harsh environments. The stakeholders, especially local governments in Iraq, have been following the same approach for years and have developed projects to help eliminate desertification.

Habib added, “But these projects, mostly short term, have ended up as a fiasco because of the lack of interest and professional staff.” He also stressed that "corruption, the lack of good planning and funding led to the failure of the sandstorm bumper projects.”

Drought has drained the Green Belt Project’s trees in Karbala, forcing the local government on Oct. 10 to abandon the project to other parties able to finance it and complete it.

Suhaila Abbas Al-Khikani, a member of the Babil Governorate Council and an official of the Agricultural Committee, told Al-Monitor, “The government measures to combat the phenomenon of desertification are not enough, which is increasing the environmental threat of storms.”

She added, "The establishment of a green belt has become a necessity that cannot be delayed, because it will be the only source of resistance to desertification coming mostly from the western border.”

Khikani continued, "The region of the island across the border between Syria and Saudi Arabia was one of the most fertile areas in the region and had a huge economic return, but today it has become a desert."

The government is becoming more serious in its fight against dust storms. On May 21, Prime Minister Haider al-Abadi discussed with Erik Solheim, the executive director of the United Nations Environment Program, the formation of a green belt within a regional program involving a number of countries, including Iraq. The United Nations had in fact launched in 2013 a project to establish a green belt along the land border between Iraq and Kuwait to reduce dust storms, provided that the project was funded through Kuwaiti compensations. The Ministry of Environment announced in 2015 its intention to set up green belts on the Iranian, Kuwaiti and Syrian borders.

Over the years, there have been many statements and proposals for projects to reduce dust storms. In 2012, Hassan al-Janabi, an expert on irrigation and the current minister of irrigation, proposed a project to establish a body or ministry for the National Green Belt along with a suitable route from northern to southern Iraq.

Modern technology has introduced new treatments for desertification, which the Ministry of Agriculture intends to follow, according to Hamid Nayef, the official spokesman of the Ministry of Agriculture. Nayef told Al-Monitor, "The ministry is cooperating with the International Atomic Energy Agency, as well as other countries. This was strengthened at the conference on combating desertification held in the Chinese capital Beijing on Sept. 12. All those who were interviewed by the ministry believe that the security situation will be an impediment to investment and funding in projects aimed to combat desertification.”

Nayef said, "The new modern project is not only combating desertification through planting trees, but also by digging wells with modern technologies.”

The creation of green belts throughout the country will not only reduce the quantity and degree of dust storms, but will also alter Iraq's extreme temperature, improve the environmental balance, provide wildlife with new opportunities for living and create thousands of job opportunities for unemployed youth.