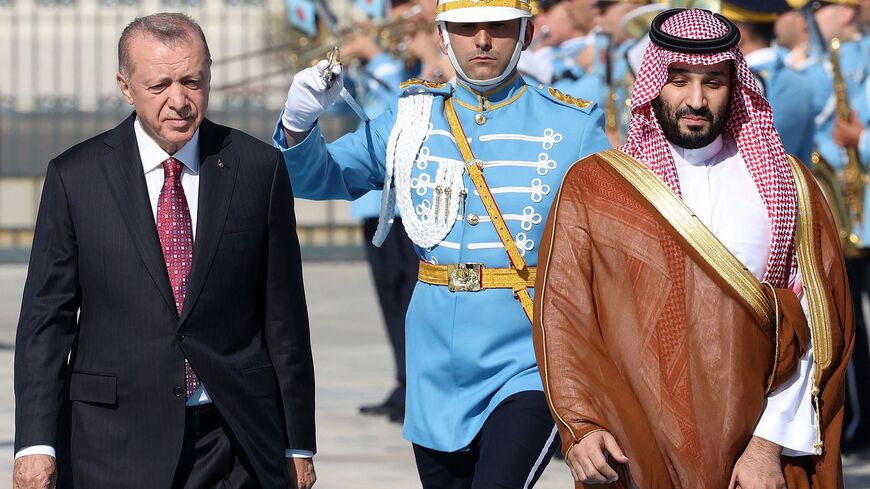 Following years of deep hostility over the murder of Saudi dissident Jamal Khashoggi inside the Saudi consulate in Istanbul, “A new era will begin,” a senior Turkish official told Reuters news agency. The two leaders were expected to discuss bilateral investments in a range of areas including construction, energy and tourism and the possible sale of Turkey’s much vaunted killer drones to the Kingdom.

The prince, commonly referred to as “MBS” is widely believed to have sanctioned the October 2018 killing and dismemberment of the Washington Post columnist by a team of hitmen flown to Istanbul. Much of the evidence pointing to his culpability was provided by Ankara to the United Nations and the United States. The CIA also concluded that the crown prince had engineered the murder. The UN said in a report that of the 15 killers, more than half were associated with the crown prince and his office. The crown prince denied any involvement and blamed the affair on rogue elements, who were then put on trial and sentenced to 20 years.

After initially seeking to make a deal with Erdogan, MBS imposed a de facto embargo on Turkish imports and banned flights to Turkey. With Turkey’s economy in dire straits and facing presidential and parliamentary elections, Erdogan began wooing the crown prince and finally landed a meeting with him in Riyadh last month — but not before handing over the trial in absentia of Khashoggi’s killers to a Saudi court. Turkey hopes to cement a currency swap deal to help shore up the sagging Turkish lira and Erdogan’s electoral fortunes.

Financial expediency may be the immediate trigger for the volte face. But Turkey’s regional charm offensive, which also saw it mend fences with the United Arab Emirates and Israel, is also aimed at offsetting burgeoning ties between the Gulf sheikhdoms, Egypt, Greece, Cyprus and Jordan. In Ankara’s eyes they are forming an anti-Turkish bloc aimed at thwarting Turkish interests in the Eastern Mediterranean and beyond.

Turkey’s main opposition leader, Kemal Kilicdaroglu, slammed Erdogan for choosing to “embrace the man who ordered the killing.” An Istanbul judge, who opposed the transfer of Khashoggi’s murder case to Saudi Arabia was demoted to a junior position in southern Turkey after a weekend reshuffle. Nimet Demir petitioned for early retirement in disgust.

"There was never reason to believe that Erdogan’s outrage over Khashoggi’s murder had anything to do with respect for journalists and freedom of the press; his own relentless persecution and jailing of Turkish journalists and activists makes that abundantly clear,” said Sarah Leah Whitson, executive director for the US-based advocacy group, Democracy for the Arab World Now (DAWN) and a longtime friend of the slain journalist.  “Erdogan is desperate for Saudi economic support even if that means selling out justice for Khashoggi and respect for Turkey’s sovereignty, particularly after Turkish allegations that Saudi and the UAE helped orchestrate the country’s coup plot. It’s very hard to see this as anything but a humiliating capitulation by Erdogan," Whitson said in emailed comments to Al-Monitor. Whitson was referring to the botched attempt in July 2016 to violently overthrow Erdogan.

Khasoggi’s Turkish fiancée, Hatice Cengiz, aired her own opinion today, calling MBS “a killer.” “His visit to our country doesn’t change the fact that he is responsible for a murder,” she tweeted.

Cengiz and DAWN have filed a lawsuit in US federal court to seek justice for Khashoggi and say they will subpoena Turkey for further information on the case, if the judge in the lawsuit decides that the court has jurisdiction.

The rapprochement with Saudi Arabia comes amid mounting tensions between Turkey and Iran over a broad range of issues, including Turkish plans to mount a fresh offensive against the Syrian Kurds in northeast Syria and Ankara’s support for Sunni groups in Iraq. However, Turkey is unlikely to openly side with the kingdom against Iran.