Saudi Arabia intends to invest about $8 billion in various economic sectors in Egypt, which will ease the Egyptian economy's wheels amid the global crisis. 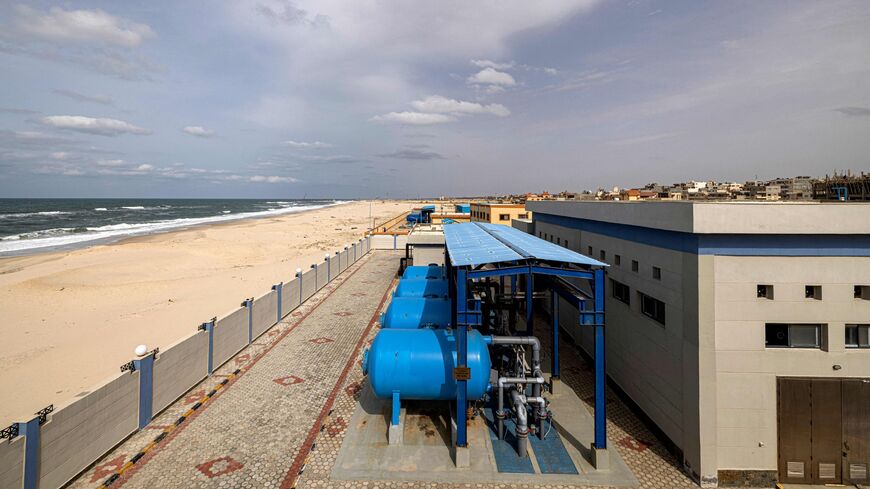 A general view of the al-Reesa Seawater Desalination Plant in el-Arish city, in the northern Sinai Peninsula, on March 20, 2022. - KHALED DESOUKI/AFP via Getty Images

CAIRO — On the sidelines of Saudi Crown Prince Mohammed bin Salman’s visit to Egypt, the two countries signed 14 agreements and memoranda of understandings worth $7.7 billion.

Medhat al-Sharif, a former member of the parliament’s economic committee, told Al-Monitor that the global economy is currently grappling with uncertainty due to potential investment risks. The greater need for self-sufficiency has promoted "regional alliances aimed at achieving economic integration between countries, especially in basic sectors affecting life necessities such as food,” he added.

Sharif pointed out that every country has its own advantages. While Egypt offers cheap labor, vast lands and economic expertise, Saudi Arabia provides financing and advanced industrial technologies.

“Egypt is seeking to achieve regional cooperation with the surrounding countries, as evidenced by the integrated industrial partnership announced on May 29 between the UAE, Jordan, and Egypt, with investments worth $10 billion,” he went on to say.

Chief among the agreements signed between Egypt and Saudi Arabia is an agreement between the Saudi Ajlan & Bros Holding Co. and the Egyptian Arab Supply Chain Group Co. to build the Egypt Center for Petroleum and Petroleum Products Storage for $3.3 billion. Also, ACWA Power and the Egyptian Electricity Holding agreed to produce and generate 1,100 megawatts of clean energy for about $1.3 billion.

Ajlan & Bros Holding Co. signed with the Egyptian Sami Saad Holding Group an agreement worth about $1 billion for renewable energy and water desalination. It also signed an agreement with Hassan Allam Holding for real estate development and the food industry at a value of less than $500 million.

According to these figures, Egypt is Saudi Arabia’s largest Arab trading partner, seventh overall in terms of exports, and ninth in terms of imports.

Mostafa Badra, professor of finance and investment at Cairo University, told Al-Monitor, “Saudi investments in Egypt will pump foreign currency into the country and create job opportunities. It will also lead to an increase in sales and services, as well as an increase in trade exchange and the Egyptian pound value, which will ultimately reflect positively on the domestic economic situation.”

The agreements also covered medicine. Jamjoom Pharma announced the inauguration of a factory in Egypt, and Pharco Pharmaceuticals announced its intention to establish a medical city in Saudi Arabia with a value of $8 million.

Islam Annan, professor of pharmacoeconomics and epidemiology at the Ain Shams University, told Al-Monitor over the phone that Jamjoom is only present in Egypt through a scientific office, and there have been discussions for some time now regarding the establishment of a factory of its own in Egypt.

He added that foreign investment in a pharmaceutical factory activates investments in the drug market, which serves the Egyptian ambition to become a drug hub in the region, especially as it has the deepest experience in pharmaceutical manufacturing in the region and is the top exporter to Africa and the second to the Middle East.

The Egyptian medical city in Saudi Arabia, while it is a private investment on the part of Pharco, will have a strategic return for the state. Annan explained that “at the end of the day, the city will produce an Egyptian product with Egyptian quality, one that will be rolled out in one of the largest drug markets in the Middle East, namely Saudi Arabia."