Egypt ready to export gas to Lebanon once US grants waiver 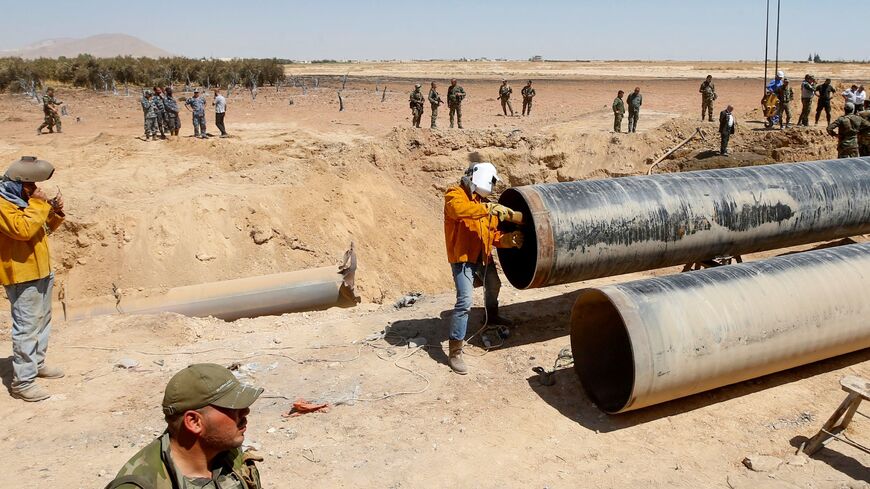 Syrian engineers repair a gas pipeline between the areas of Adra and al-Dhamir in the Damascus region on August 24, 2020, after it was reportedly a site of an attack that caused a nationwide blackout the day before. - - LOUAI BESHARA/AFP via Getty Images

Egypt will once again export natural gas to Lebanon via Syria after the signing of an agreement on June 21. Under the agreement, 650 million cubic meters of natural gas will be exported annually via the Arab Gas Pipeline. The actual supply of gas, as per the World Bank conditions, awaits US approval to exclude Egypt from the sanctions targeting the Syrian government.

Under the deal, Egypt will pump gas through a pipeline to supply Lebanon’s Deir Ammar power plant in the northern part of the country, which would lead to the production of 450 megawatts of electricity, adding four hours of electricity supply a day.

The Arab Gas Pipeline is an already existing pipeline that supplied Lebanon with Egyptian gas in the past, but it was halted years ago.

Speaking to Al-Monitor by phone, the official spokesman for the Egyptian Ministry of Petroleum, Hamdi Abdel Aziz, explained that the 1,200-km pipeline stretches from Egypt to Jordan, then from Syria to Lebanon, in four stages. The first stage starts from Egypt’s al-Arish to Jordan’s Aqaba. Natural gas supplies from Egypt to Jordan began under this stage in 2003.

The second stage runs from Aqaba to Rehab area, which is 30 km from the Jordanian-Syrian border. Gas supply to the power plants in the northern part of the Kingdom began in February 2006, he said. The 30-km third stage runs from Jordan’s Rehab to the Jaber region in Syria, and that stage was completed in 2008.”

The fourth stage, which stretches from the Jaber area on the Syrian side of the Jordanian-Syrian border to Lebanon, began piping Egyptian natural gas exports to Lebanon in November 2009 and stopped in 2011, he said.

Commenting on the current situation in Syria, Abdel Aziz said that discussions are underway on the Syrian gas network’s ability to pump gas to Lebanon, which is a requirement. Abdel Aziz indicated that there will be agreements on the prices and commercial terms, after obtaining the US consent to the export of Egyptian gas to Lebanon through the World Bank funding, and added that the current procedures are taking place in the absence of any objection from Washington.

Yomn El-Hamaky, professor of economics at Ain Shams University, said that the deal will help increase Egypt’s gas exports. She stressed that the state is now moving to liquefy and export natural gas and to conclude agreements for this purpose, including the deal with the EU and some Arab countries.

Speaking to Al-Monitor by phone, she said that Lebanon is grappling with a major shortage of energy sources and infrastructure projects, and the export of Egyptian gas to Lebanon will support Arab economic integration and strengthen relations with Lebanon. The reasons behind the delay in signing the export agreement, she said, are the US sanctions on Syria.

The administration of US President Joe Biden has yet to make a final decision on whether the plan would violate sanctions on Syria, according to statements by a US State Department official earlier this month.

In addition to the Egyptian gas, Lebanon is counting on a separate deal to import electricity from Jordan. The deal is the cornerstone of the Lebanese government’s plan to bridge the deficit in the state power firm.

Michael Awad, a Lebanese political analyst, told Al-Monitor that the electricity crisis has cost the country more than $60 billion over the past 20 years, because of a system that seeks to strengthen monopoly centers. The state-run Lebanese Electricite du Liban can only produce a few hours of electricity supplies a day.

He further said, “The citizens are forced to resort to neighborhood generators to have electricity, which has become very hard for low-income employees to afford. The Lebanese have long been accustomed to regular power cuts for a few hours a day in the capital, Beirut, and to a much longer period in other areas, where the state-run power plants cannot meet the local need.”