Drone blast near US consulate in Erbil injures three

No US-led coalition facilities were hit in the latest attack, an official told Al-Monitor. 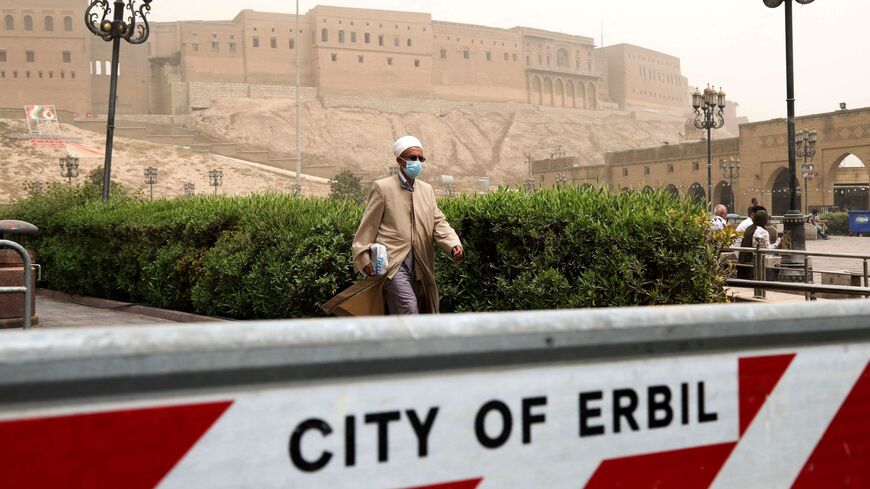 A picture shows a view of the area around the citadel of Arbil, the capital of the autonomous Kurdish region of northern Iraq, as dust engulfs the sector on May 24, 2022. - SAFIN HAMED/AFP via Getty Images

A drone armed with explosives lightly injured three civilians in the city of Erbil in the Kurdistan Region of northern Iraq on Wednesday.

The intended target of the attack, which occurred some 3 kilometers (1.9 miles) from the construction site of a new US consulate facility, was not immediately clear.

Sabereen News, which is associated with pro-Iran militias in Iraq, released video purporting to show the blast. A Telegram channel for Sabereen initially claimed the US consulate complex and a US base in the Shoresh neighborhood had been targeted, before an update was issued saying that the targeted headquarters was near the Emirati consulate and some kilometers away from the new US consulate building.

A senior official with the US-led military coalition in Iraq and Syria told Al-Monitor that the explosion did not impact any facilities housing coalition troops. The coalition official said KRG security forces had recovered the drone, but said there was no indication yet of its type or origin.

Why it Matters: The incident is the latest in an ongoing series of missile and drone attacks in Iraq.

The barrages have also injured and killed civilians in the past. Such attacks have often been attributed to, and in some cases claimed by, Iraqi militias believed to be linked to the Quds Force of Iran’s Islamic Revolutionary Guard Corps (IRGC).

The US military maintains roughly 2,500 personnel in Iraq and another 900 in Syria in the wake of the multinational war against the Islamic State group.The US reduced its military footprint in Iraq in 2020 amid an uptick in rocket attacks on military bases used by the coalition. Such attacks accelerated during the Donald Trump administration’s so-called “maximum pressure” campaign against Iran.

Prominent Iran-backed groups have long publicly called on the US and other foreign troops to leave the country.

Dana Stroul, the Pentagon’s top policy official for the Middle East, told Senate lawmakers today that Tehran continues to hold the expulsion of US forces from the region as a strategic objective.

Timing: Wednesday’s attack came just hours after Iran’s government slammed the US and European states over a draft resolution at the UN’s International Atomic Energy Agency (IAEA) that censured Tehran for failing to fully comply with inspections into its past nuclear activities.

Iran’s Atomic Energy Organization on Wednesday said it shut down two IAEA cameras at an unspecified nuclear facility in response for the decision. Iran’s foreign ministry has threatened consequences for supporters of the resolution and said the move will impact the stalled Vienna negotiations over a return to the 2015 nuclear agreement.

Those talks appear to be hanging by a thread as Tehran has demanded the IRGC be removed from the US’s list of designated terrorist groups before concluding a deal. The IRGC, however, has continued to support insurgent groups targeting US and Israeli personnel, as well as Arab Gulf states, American officials have said.

Iran’s leaders refused before the outset of the talks last year to negotiate over their country's ballistic missile program and support for proxy militias in the region – issues of key concern to the US and its regional allies – insisting the negotiations focus exclusively on nuclear issues outlined in the original 2015 agreement.

Know More: Iran’s Javan newspaper, which is close to the IRGC, ran a piece floating the option of leaving the Non-Proliferation Treaty if tensions continue to escalate with the IAEA, Al-Monitor reported.

This story was updated to clarify the location of the attack and include claims by media affiliated with pro-Iran militias.