Four US soldiers injured by rocket attack in Syria

The barrage suggests Iran's proxies will continue to harass US forces in the region, whether or not the sides return to the 2015 nuclear deal. 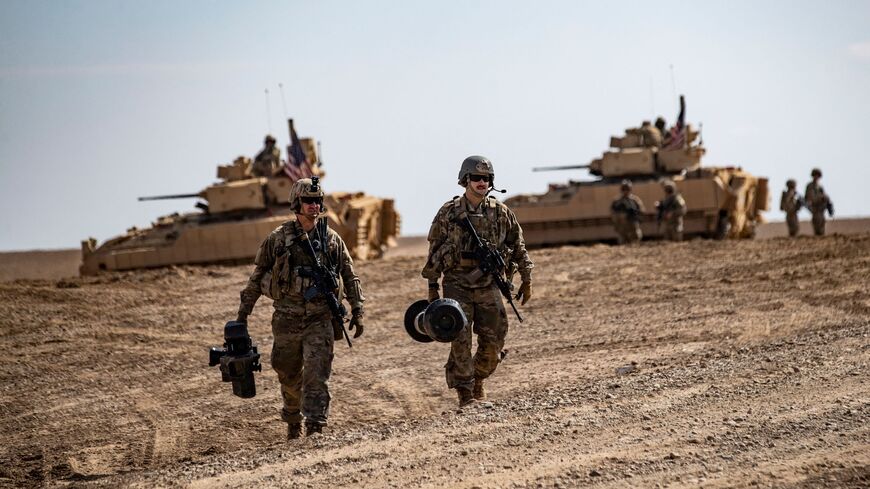 Troops from the Syrian Democratic Forces (SDF) Special Operations and the US-led anti-jihadist coalition take part in heavy-weaponry military exercises in the countryside of Deir Ezzor in northeastern Syria, on March 25, 2022. - DELIL SOULEIMAN/AFP via Getty Images

Four US soldiers have received medical attention for “minor injuries” and possible brain trauma following a projectile attack on a US-led coalition base in eastern Syria.

On April 14, the US-led coalition announced that the incident was not caused by indirect fire at all, "but rather the deliberate placement of explosive charges by an unidentified individual(s) at an ammunition holding area and shower facility."

"The incident remains under investigation," the statement read.

Earlier on the day of the attack, a US Special Operations task force reported on its official Twitter account that two troops had been hurt in the incident.

The US-led Special Operations Joint Task Force-Levant (SOJTF-L) said one soldier was treated and released while another remained under evaluation for a possible traumatic brain injury. SOJTF’s initial tweet was later deleted and replaced with the coalition’s statement.

US forces thwarted a subsequent attack before dawn on Friday in the neighboring Anbar province of Iraq, the coalition said in a separate statement.

"At approximately 1:46 a.m., April 8, US air defense systems shot down an armed unmanned aerial system entering Al Asad Air Base," the coalition said, adding that no personnel were reported injured and there were no damages.

Why it Matters: Thursday's barrage is the first of its kind reported against US forces in Syria since January, when the coalition retaliated against Iran-backed militia for a previous rocket attack near the same base. No American personnel were reported hurt in that incident.

Thursday’s attack is the latest indication that Iran’s network of proxy militias will continue to harass US troops in the region, despite progress towards a return to the 2015 nuclear agreement between the two sides in Vienna.

What's Next: Gen. Michael Kurilla, the new top commander for US forces in the Middle East, said earlier this year that a return to a deal that includes unfreezing of Iranian funds abroad could increase risks to American troops in the region.

Know More: Read the latest details emerging on negotiations with Iran in Vienna.

This story was updated on Apr. 8 to include details of the drone attack on Asad Air Base and again on Apr. 14 to include new details revealed by the US-led coalition's investigation.