A Turkish soldier was killed northeast of Mosul shortly after NATO and US officials announced they will withdraw from Afghanistan this year. 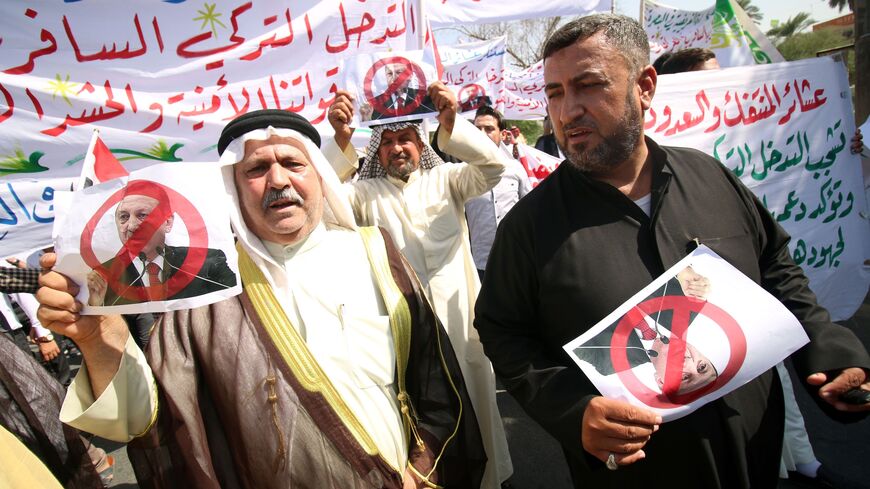 Iraqi tribesmen hold posters bearing a portrait of Turkish President Recep Tayyip Erdogan crossed out during a protest against the continued presence of Turkish troops in northern Iraq on Oct. 16, 2016, in the southern city of Basra. Turkish troops are deployed in the Bashiqa area despite Baghdad's demands that they be withdrawn. - HAIDAR MOHAMMED ALI/AFP via Getty Images

Erbil International Airport in Iraq’s northern Kurdistan region was hit by at least one explosion Wednesday night, Iraqi and US officials said.

The blast, which was audible throughout much of the city, is believed to have been caused by a drone, a spokesman for the US-led international military coalition in Iraq, Col. Wayne Marotto, told Al-Monitor by phone.

“An unmanned aerial surveillance system landed on a storage hangar at Erbil Air Base,” Marotto said. A fire at the site was extinguished and no injuries were reported, he said.

The Kurdistan Regional Government said a drone carrying explosives targeted a warehouse in an area of the base used by US-led coalition personnel. The base sits adjacent to and on the grounds of Erbil’s civilian airport.

In a separate attack some 40 miles away Wednesday night, a Turkish soldier was killed and a local child reportedly injured in what Ankara said was a Katyusha rocket strike on a base near the town of Bashiqa, northeast of Mosul and about 50 miles northwest of Erbil.

It was unclear who was responsible for the attacks and whether the incidents were related. Iran-backed militias have been attacking US forces and Iraqis are opposed to the Turkish presence in their country.

The blasts occurred after a press conference in which US and NATO officials announced their plan to jointly withdrawal from Afghanistan later this year.

NATO has pledged to significantly expand its number of military advisers to Iraq in the coming months as the United States eyes a further troop reduction in the country to relieve pressure from Iran-backed groups on Prime Minister Mustafa al-Kadhimi.

Coalition positions in Iraq have been targeted by a series of rocket strikes in recent years, many of them attributed to Shiite militias tied to Iran.

In February, more than a dozen rockets landed in and around Erbil’s airport, injuring nine people and killing two others. The Biden administration responded days later with an airstrike on a site used by Iran-backed militias across Iraq’s border in Syria.

Nonetheless, attacks on coalition positions in Iraq have continued. Last month an American contractor died of a "cardiac episode" after rockets struck at al-Asad airbase, the Pentagon said.

If the use of a drone is confirmed, Wednesday’s attack on Erbil would mark the first known use of an unmanned aerial vehicle against a coalition position there. The KRG’s counterterrorism service had previously attributed Wednesday's blast to a rocket strike.