The Syrian regime's siege on the Rukban camp near the Jordanian border has tightened over the past two months, prompting many of the camp’s residents to risk arrest by leaving. 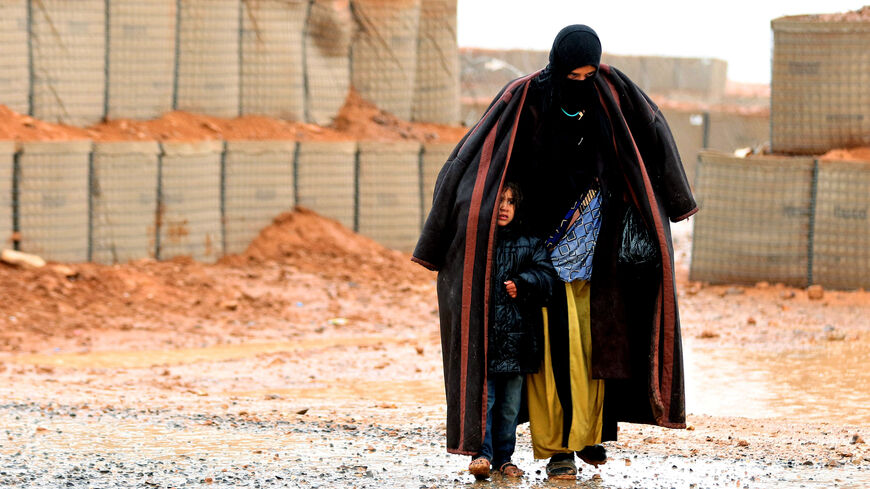 A Syrian refugee from the Rukban displacement camp, which lies on the border between Syria and Jordan in the remote northeast, walks in the rain as she shelters a young child outside a UN-operated medical clinic March 1, 2017. - KHALIL MAZRAAWI/AFP via Getty Images

The Syrian Response Coordination Group, an Idlib-based humanitarian association assisting the displaced, recently spoke out against the Syrian regime's siege on the Rukban camp, blocking food and medical supplies for more than 1,000 families on the Syrian-Jordanian border.

In a statement posted to Facebook May 24, the group said that the regime’s “concept of hunger or surrender” is tantamount to a “war crime against civilians living in the camp” and that the regime is seeking to starve those living there into returning to the areas under its control.

Regime and Russian forces have further restricted access to the camp in the past few days and flour, food, medicine, baby formula and fuel, among other basic commodities, have run out. Many residents are fleeing the camp in light of the miserable conditions, with high prices for basic materials as a result of the regime's taxes on food trucks entering the camp and a lack of job opportunities.

The camp has become an open-air prison in the Syrian desert.

Ahmed al-Khodr, director of the media office of the US-backed Syrian armed opposition group Jaysh Maghawir al-Thawra, told the opposition Enab Baladi news site on May 24, “Despite the risks, the siege imposed on the camp is pushing some families toward areas controlled by the regime.” He went on, “Jaysh Maghawir al-Thawra, which is stationed at al-Tanf military base near the camp, does not stop anyone seeking to leave for the areas under the control of the regime provided they have approval from the faction’s security office and do not have any outstanding debts in the camp.”

The Tribal Council of Palmyra and Badia, a network formed to assist the Rukban camp, called on UN Secretary-General Antonio Guterres “to take action to help about 3,500 displaced people in the Rukban camp” it identified as the most in need.

The council added in a statement released in mid-May that Jordan closed the camp's UN-affiliated medical center after the reported deaths of children, noting, “The last time an aid convoy entered the camp was in 2019.”

Zain al-Din Muhammad, a journalist based in the eastern Syrian countryside of Deir ez-Zor, told Al-Monitor, “The siege is ongoing in the Rukban camp. It has been a whole month and about 7,500 civilians are still trapped in the middle of the desert. Regime forces are still preventing aid from entering the camp, which is near al-Tanf base. The international coalition and the United Nations have abandoned the camp since 2019.”

He went on, “The residents of the camp have suffered one calamity after another. A water crisis hit the camp for three days when the water Jordan pumps to the camp was reduced to less than half, leaving the lives of thousands of civilians at stake, with current quantities unable to meet the needs of the camp residents.”

Muhammad added that a delegation from the city of Al-Qaryatayn in the Homs countryside plans to meet with regime leaders on allowing the camp residents to escape the siege and return to their own areas.

Mohammed Abdullah, a resident and activist in the Rukban camp, told Al-Monitor, “There is a humanitarian catastrophe plaguing the camp as the regime forces prevent the entry of any aid into the camp while the international coalition sits idly by. No one is pressuring the regime forces to allow any aid to enter.”

He continued, “There is a shortage of drinking water, baby formula and flour. There is a shortage of everything. There are no organizations to support education. Kids are being educated in unequipped random places. Add to this that there is a water crisis and what water is available is polluted. For fear of being arrested, some people are sneaking out through the desert to escape the camp without ending up in areas under the control of the regime.”

He added, “The suffering has prompted many families to leave the camp for regime-held areas, but doing so puts them at risk of being arrested, especially young men and women. This is why most camp residents prefer to endure this suffering rather than end up in regime-held areas.”

Abdullah concluded, “Some camp residents want to communicate with the regime in order to reach a solution that would allow them to leave the camp and return to their own areas. But most camp residents fear for their safety, as this is a regime that does not keep its promises.”